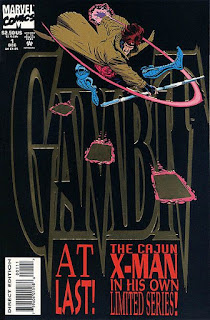 In a Nutshell
Gambit learns his wife is still alive, and attempts to bring her back to full health, disrupting the relationship between the Thieves and Assassins Guilds in the process.

Plot
Issue #1: Gambit's brother Henri infiltrates the mansion in order to urge Gambit to return home for the titheing, telling him that Bella Donna's brother Julien is stirring up trouble between the guilds. Just then, Henri is killed by a group of Assassins led by Julien. Gambit tracks them down, and learns that Bella Donna is alive, prompting him to head down to New Orleans, as Rogue insists on accompanying him.

Issue #2: Gambit discovers his wife alive, but comatose, inside the home of her father, head of the Assassins Guild. He and Rogue fight off the Assassins and take Bella Donna, with her father imploring Gambit to use the Thieves' Elixir of Life to restore her. Gambit proceeds to meet with his father, head of the Thieves Guild, but he refuses to give up the elixir, prompting Gambit to declare he will steal it himself. Leaving Bella Donna with Rogue at his unused house, then sets out for Paris.

Issue #3: Gambit infiltrates the Parisian casino run by Candra, the External who provides the Guilds with their respective gifts in exchange for their tithes, and draws the attention of her and her Tithe Collector. Back in New Orleans, Rogue touches Bella Donna, experiencing her memories of her time with Gambit. In Paris, Gambit & Candra are interrupted by rival forces led by Gambit's father and Julien. In the ensuing fight, Gambit manages to steal the elixir from an enraged Candra.

Issue #4: The Tithe Collector leads a group of Assassins & Thieves against Gambit. He fights them off, and is about to give Bella Donna the Elixir, but Julien interrupts, spilling it before he is slain by his father. Just then Candra appears, pleased with the spectacle and ordering the Assassins to kill Gambit in exchange for a restoration of their arrangement, but Bella Donna's father declares they are done bending to her will. As Candra leaves, Gambit manages to salvage enough of the elixir to restore Bella Donna, but when she wakes up, she has no memory of Gambit, and he leaves her in the care of her father. He then turns to Rogue, but she is rattled by Bella Donna's memories, and flies off, leaving Gambit alone to ponder that mutant thieves are meant to have no loyalties, love, or dreams of the future.

Firsts and Other Notables
The final of Marvel's three X-Men related miniseries in 1993, this one follows up on plot threads from the X-Men/Ghost Rider crossover which introduced a big chunk of backstory for Gambit, including the existence of his wife, Bella Donna, and his association with the Thieves Guild and their rival Assassins Guild.

Rogue declares her love for Gambit (to the Wolverine, and the readers) in issue #1, a sentiment that is not surprising but has gone unstated throughout their relationship up to this point, and to Gambit in issue #4. 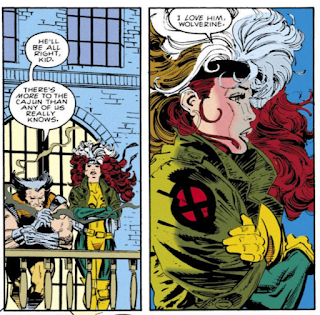 Of course, nothing can ever be easy for those two crazy kids, so this series also reveals that Bella Donna, Gambit's wife (introduced in X-Men #8, the last time Rogue & Gambit were getting too comfortable together, and who apparently died battling the Brood in issue #9) is in fact alive, albeit in a diminished state. Gambit ultimately prevails in bringing her back from the brink of death, but she doesn't remember him. She will return in various Gambit solo stories in the years ahead. 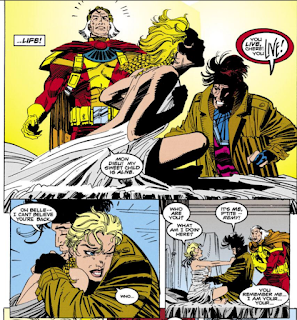 This series reveals that the strange figure garbed in black, who stalked Gambit and the X-Men in the Ghost Rider chapters of the Brood crossover, is Gambit's brother-in-law Julien, who was saved from his apparent death at Gambit's hands (which led Gambit to flee New Orleans and abandon his wife in order to maintain peace between the guilds) by using the Elixir of Life, but at the cost of his sanity, to the point where he's become too extreme even for some of the Assassins, and is desperate to get more of the Elixir to sustain him. 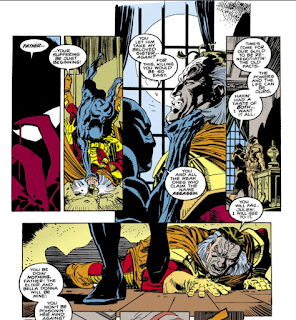 Issue #1 introduces Candra, a new female External with telekinetic powers, who is revealed to be the benefactress of the Thieves & Assassins Guild, with each group paying her a regular tithe in exchange for the elixirs of life (the Thieves) and power (the Assassins). Thanks to her connection to Gambit, she will ultimately outlast most of the other Externals, popping up again in the Rogue limited series and Gambit's later solo series. 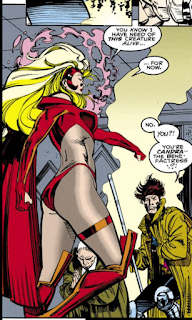 This issue establishes that Gambit is not blood-related to his family in the Thieves Guild, and was adopted by his father, which will help fuel the "Gambit is the Third Summers brother" speculation. 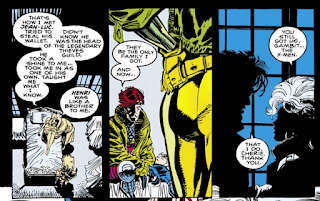 In addition to Candra, this series introduces a bunch of characters tied in with Gambit's New Orleans-based Guild past, who will make sporadic appearances in the future. First is the Tithe Collector, the agent responsible for gathering the Guilds regular tributes to Candra and dispensing their rewards. 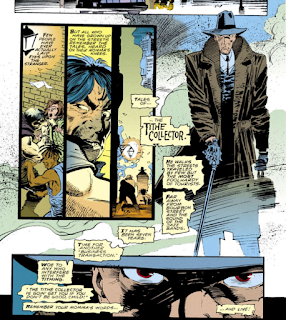 Next is Gambit's brother Henri who makes his first appearance and then dies in the first issue; he will appear in the flashback story of X-Men #33. 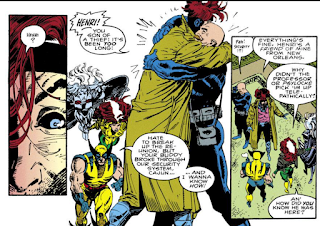 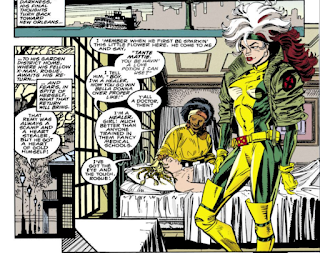 Gambit is banished from New Orleans at the end of the story, as a consequence for his fiddling with the titheing process. Unfortunately, this doesn't mean the end of Guild-related stories. 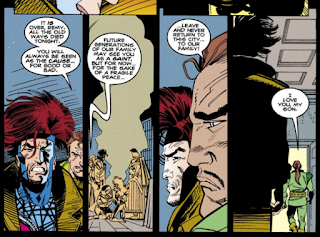 Chris Claremont & Jim Lee get a "created by" credit at the start of each issue, though Jim Lee did not draw Gambit's first appearance (he nevertheless designed the character).

As with the other limited series this year, the first issue of this series features a foil-embossed cardstock cover.

Collection Recollection
As noted in the review of Excalibur #71, I passed on the first issue of this series in favor of the final chapter of "Fatal Attractions" when spotting both on the comic rack with limited funds, and by the time I tracked it down at my regular shop, it had already been marked up, and so I passed on the rest of the series. Eventually, I acquired the second issue in a baseball cards-for-comics trade with my next door neighbor at the time (I also got the awful 90s era Hawkeye limited series in that trade, but I was a Whackos fan too), and I wasn't impressed enough with what I read to seek out the rest of the series for a good long time. In fact, reading issues #3 and #4 for this review may have been the first time I ever read them.

The Chronology Corner
This story takes place between Uncanny X-Men #304 and X-Men #25.

A Work in Progress
It's said at the start of the series that the uneasy peace between the Thieves & Assassins Guilds was broken when Gambit last came to New Orleans, a reference to the X-Men/Ghost Rider crossover (though no footnote to those issues is provided). 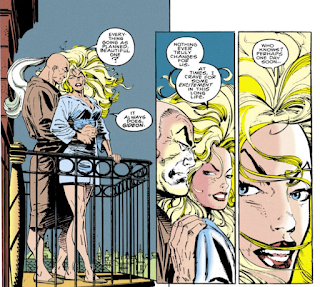 The Thieves Guild operate from a massive underground structure beneath the French Quarter, which, given New Orleans relative altitude and proximity to the ocean, really isn't possible.

It's noted that the members of the Thieves Guild, despite being thieves, live poor (albeit long) lives, as they give most of their money to Candra in exchange for the Elixir of Life. 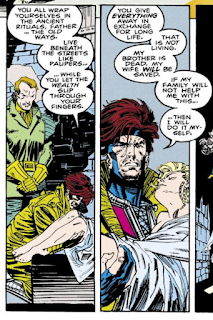 Pun with Peter Gambit
Gambit hurls several cards at a group of Assassins, declaring they'll "let the cards fall where they may".

Young Love
Because he has to have a romantic history with all women in his past, it is established here that in his younger days, Gambit carried on with Candra (without knowing she was Candra, benefactress of the Guilds). 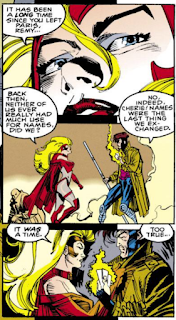 Despite their feeling for one another out in the open, the series ends with Rogue declaring she can't be with Gambit, in the wake of his wife's return and the memories Rogue experienced of Bella Donna's past with Gambit. 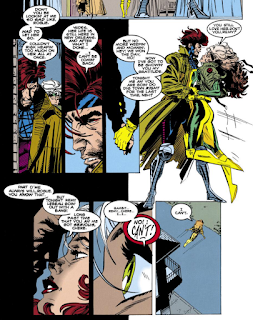 Austin's Analysis
Once Marvel decided to celebrate the X-Men's 30th Anniversary (and continue to flood the market with product) in part via a batch of limited series, it must have been a no-brainer to award one of those series to Gambit. He was extremely popular at the time, with a fun, visually-distinctive, power and a Wolverine-esque mysterious past, providing plenty of room for narrative exploration outside the X-Men setting. Unfortunately, Howard Mackie was selected to write the series, which means it's a deep dive into Gambit's previously-established backstory as a member of one of two rival guilds with a Romeo & Juliet-style relationship involving the daughter of the head of the other guild, all of which Mackie initially setup during the crossover between his Ghost Rider and the X-Men.

All of the guild stuff isn't necessarily inherently bad - and while the Gambit & Bella Donna as Romeo & Juliet is cliche, but there's a reason it's a cliche that gets trotted out so often - but it is undone by the smaller details, like the fact that the assassins wear goofy, brightly colored costumes, or how the thieves someone live beneath New Orleans. Tying the concept to the External (who at this point are even more of a lameduck concept than the Upstarts) also does the concept no favors, and Mackie's scripting - which is ponderous & overwritten while lacking Claremont's flair for prose which made his copious captions entertaining to read just on the strength of how they were written - does the series no favors.

All of that said, this isnt as terrible as it could be. A lot of that is down to the art, which is surprisingly strong. Neither Lee Weeks or Klaus Janson are artists who are terribly exciting on their own (Weeks is usually competent but workmanlike, while Janson tends to be rough & sketchy - Sienkiewicz without the fun layouts) but together, they complement each other well, and the result is moody & atmospheric but still well-crafted & readable (perhaps not as bombastic or stylistic as the art in the Deadpool & Sabretooth minis, this is probably the strongest art - on a technical level - of the three). Mackie also helps himself by changing up the scenery a bit - going from the X-Mansion, to New Orleans, to Paris - which keeps the story moving and helps keep some of the the guild nonsense in check. And by positioning Gambit in this story as someone who only cares about what is best for Bella Donna (that is, someone working against both Guilds), he presents a central character who is as unimpressed with the Guild shenanigans as the readers, which makes it more palatable all around. It's hard to imagine ever wanting to read this again, and even with the surprisingly solid art, it's still probably the lesser of the three '93 X-miniseries, but it's also nowhere near as bad as a Guild-centric Gambit story featuring the Externals could have been.

Next Issue
Tomorrow, more secrets of Cable revealed in Cable #7. Next week, a secret of Xavier's past is revealed in Uncanny X-Men #309.