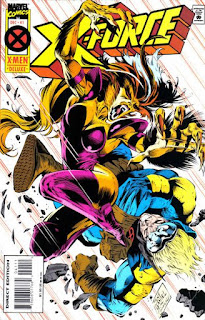 In a Nutshell
The truth about the murders in Feral & Thornn's past is revealed.

Plot
Cannonball, Shatterstar, Thornn & Detective Hidalgo explore Feral & Thorrn's old house, hoping to draw Feral out. They succeed, but Feral grabs Hidalgo and takes him to the roof. Outside, Cable sends Siryn to the roof, while Hidalgo taunts Feral, telling her she's evil. As Cannonball, Shatterstar & Thornn make their way through the building, Cable insists to Domino that Feral isn't dying today. As everyone converges on Feral and the captive Hidalgo, the truth about Feral & Thornn's childhood comes out: how a young Feral, overhearing their mother, blamed their youngest sister Carolina for their father leaving, and how Carolina fell down the stairs to her death shortly thereafter, while Feral was supposed to be watching her. How their younger brother Matteo was playing with Feral's treasured pigeons on the roof and fell, unable to pull himself up. How Feral killed their mother's boyfriend when he tried to rape Thornn, then killed their mother after she slaughtered Feral's pigeons in retribution. The truth revealed, X-Force overpowers Feral and Hidalgo arrests her. In the wake of the encounter, Cable reveals to Cannonball who provided the tip on Feral's whereabouts: Dani Moonstar, who tells Cannonball she did it because she still cares about the truth, and family.

Firsts and Other Notables
This issue is essentially a big info dump on Feral & Thornn's past, which re-contextualizes Thornn as the less explicitly-evil sister (after her debut as part of Toad's Brotherhood of Evil Mutants) and reveals the extent to which Feral was involved in the deaths of her family. First, she stood by as her younger sister fell down the stairs (or she possibly pushed her; it's left deliberately vague), then she watched as her younger brother fell off the roof (and didn't make an effort to pull him up). Then, after her mother's boyfriend attempted to sexually assault a teenage Thornn, she killed the boyfriend, and finally, after her mother killed Feral's pigeons (the only things she truly cared about) as revenge for killing her boyfriend, Feral killed her mother. 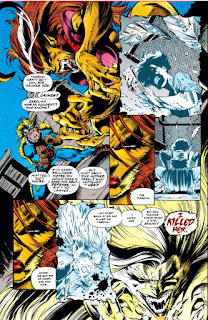 This is Feral's last appearance for awhile; she'll next appear in the post-"Onslaught" Quicksilver solo series, before returning to this book in issue #88.

It’s revealed this issue that Moonstar is Cable’s informant inside the MLF, who tipped him off to Feral’s presence in the city and helped him frame the MLF for X-Force’s actions when drawing her out. 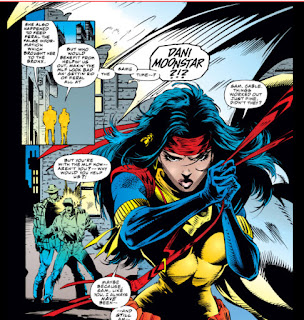 A Work in Progress
Cable recalls having shot his son to save others, which steels his resolve to find a way out of the situation without killing Feral. 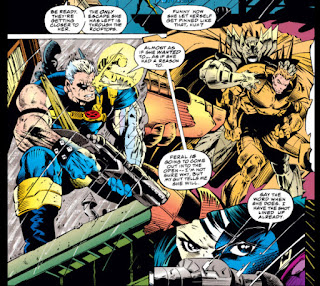 Feral says she never had a problem with Siryn specifically. 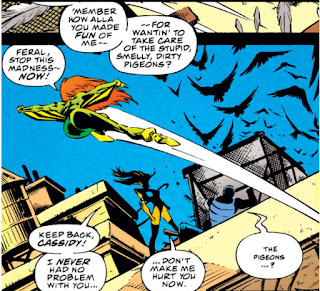 Austin's Analysis
This issue shares something in common with X-Men #39, in that it is mostly devoted to developing a character who more or less disappears after it concludes (Feral will be back, but her days of being a regularly-appearing character essentially ended when she threw in with the MLF). Fortunately, here, Nicieza and Tony Daniel are able to elevate the relative narrative dead-endness of the plot via the craft involved. Nicieza tells a compelling tale of Thorrn & Feral's tragic childhood, generating pathos for both sisters even while making it clear just how much darkness resides in Feral. And while the best that can usually be said of Daniel's art is "not making things worse", here he manages to energize what is essentially one long chunk of exposition with some engaging layouts, such as when he draws what a character is thinking instead of Nicieza using a thought bubble to convey the same information, helping keep the pace accelerating even when all that's technically happening is a bunch of characters standing around talking. Ultimately, this is backstory for Feral that probably would have been better served had it been revealed earlier in the characters' tenure, but thankfully, Nicieza & Daniel still manage to make the telling of it, however ill-timed, entertaining.