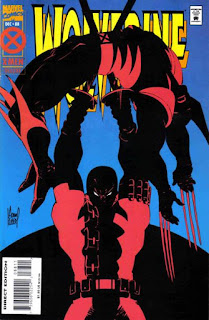 Plot
Asked to check on Garrison Kane by James Hudson, Wolverine arrives at the apartment in San Francisco where Kane lives with Vanessa to find Deadpool waiting. With Wolverine's healing factor still not at full strength, Deadpool overpowers him and heads off in search of Kane & Vanessa, who are working at a local theater. As Wolverine pulls himself together, he spots Vanessa in a picture amongst a theater company and figures that's where Deadpool is heading. He stumbles outside and hails a cab. At the theater, Deadpool attacks Kane & Vanessa, hurling one sword at each of them, forcing Kane to choose between saving himself & saving Vanessa. Kane deflects the sword coming at him, just as Wolverine arrives & saves Vanessa. Outnumbered, Deadpool tosses a grenade to cover his escape. Later, Wolverine tells Vanessa not to be too hard on Kane, as if he allowed himself to be killed, he wouldn't have been able to save her anyway, then wishes them both well, saying it's finally time for him to go home.

Firsts and Other Notables
Deadpool & Wolverine meet for the first time in this issue (publication-wise, at least). and it's somewhat remarkable both that it took this long and that not a bigger deal is made of it. Of course, Deadpool isn't yet as popular at this time as he is now, but the character definitely had a following (considering he'd already earned himself two limited series), and given both characters shared "kewlness", it's surprising they weren't brought together sooner. 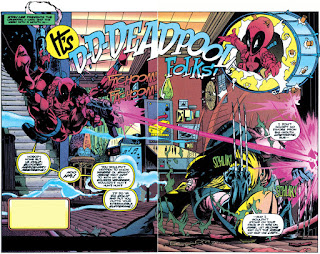 The pages "drawn" by Fabio Laguna in this issue feature some of the more notorious examples from this era of swiping, with Laguna copying over figures from, chiefly, Jim Lee's Omega Red story from X-Men #4-7. 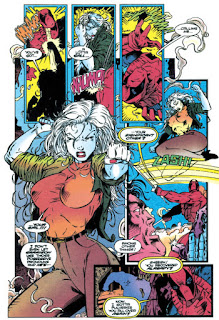 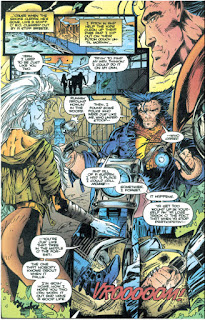 A Work in Progress
Wolverine says that James Hudson asked him to check up on Kane, something we didn’t actually see in issues #83 and #84 (also, James Hudson apparently knows and is concerned about Kane).

Artistic Achievements
In addition to all the swiping, as soon as Laguna takes over, Kane goes from wearing street clothes to his six pack uniform. 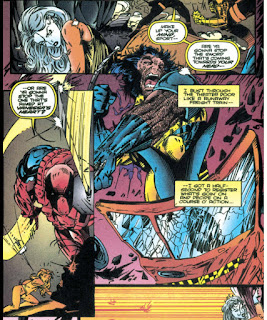 The Best There is at What He Does
Wolverine notes that his healing factor is working faster of later, presumably starting to recover after being overworked following the removal of his adamantium. 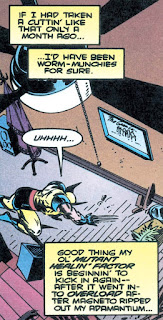 Austin's Analysis
Plotwise, this is fine; it features a surprisingly-long-in-coming meet up between Wolverine & Deadpool, probably spends too much time on "Wolverine taking a cab" shenanigans, and the extent to which Deadpool threatens Vanessa's life seems out-of-character, but it works well enough as a vehicle for some action and a way to highlight Wolverine's decision to return home after twelve issues (and counting) away. And there's few problems in the Adam Kubert-drawn portions of the issue (though the preponderance of double-page spreads made this more difficult to read on my iPad than I'd like, not that such is or ever was Kubert's concern). But hooboy, when Fabian Laguna takes over, do things get rough. When he's not swiping Jim Lee to such an extent that it's obvious even to me, the art is chicken-scratch worthy and barely coherent. It called to mind some of the extremely rough, non-Alan Davis drawn issues of Excalibur (which is never a good thing). Which is a shame, because it mars what is otherwise a fun, action-orientated character meetup, and a semi-historical first encounter between Wolverine & Deadpool.