Force in Focus: Return of the Jedi Action Figures Wave 1 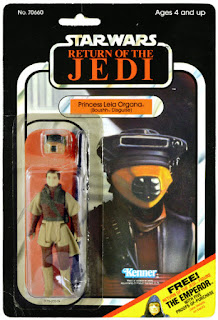 Firsts and Other Notables
With the launch of Return of the Jedi figures, the price per figure increased from $2.49 to $2.99, up from the original $1.99 when the first wave of Star Wars figures were released in 1978.

In terms of the Big Three, with Leia & Luke's new figures inspired by their appearances in Jabba's palace in the first act, Han sits this wave out (perhaps in order to not spoil the question of whether or not he emerges from carbonite, but presumably by the time the figures were on sale it was known that Harrison Ford was in the movie; more likely, it comes down to the fact that Han spends most of the first act in said carbonite - a figure commemorating that will appear later in the line). In his place is Lando, who receives his second figure, this one bearing his Skiff Guard/Jabba Palace disguise (Han will receive a new ROTJ-themed figure in the second wave). 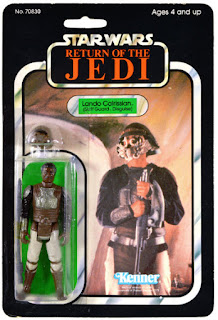 General Madine, who comes with the action-packed accessory of "pointer", represents the first Rebel general to receive his own figure, beating out previous Rebel leaders Dodonna & Rieekan. 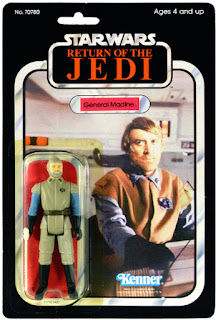 One three pack of figures was released with this wave, featuring the Max Rebo Band, which provided tunes for Jabba's palace (until they got overshadowed in the stupid Special Edition edit).

This is the only wave to not include at least one droid in it.

The Rebel Commando (plucked, like the Ewoks, from later in the film) comes with the standard removable gun, but has a molded backpack affixed to his back.

In general, the figures starting with this series feature more dynamic poses (relative to the times and the stiff-armed figures of previous waves). A good example is the Weequay figure, who is able to hold his staff with both hands. 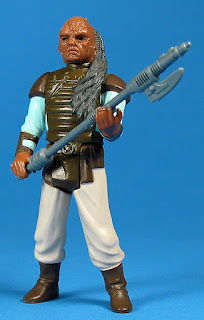 Similarly, multiple figures feature soft goods pieces, replacing the plastic/vinyl cloaks and capes that characterized earlier figures, another example of how Kenner was at least trying to add some value to the figures along with the price hike. 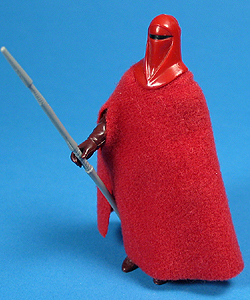 This is considered the 65-back wave, as the cardbacks of these figures featured 65 figures (from this wave, along with older figures re-carded on the Jedi-branded card). 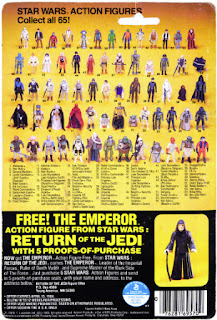 Favorite Figure
Without a doubt, Jedi Knight Luke wins this award. It might be my favorite figure of the entire run. In addition to being the best representation of my favorite character, coming from the movie where he gets to be a complete badass, and the fact that it was one of the few Star Wars figures I can still remember buying carded off a shelf (vs. at a garage sale or thrift store), it also features a great facial sculpt that looks the most like Mark Hamill of any of the original Luke figures, some dynamic sculpting, and top notch accessories, including a cloth hooded cloak (as a kid, I was a sucker for fabric capes), the super-cool looking, atypical blaster he pulled from one of Jabba's guards, and a slightly-detailed lightsaber in the correct color. Easily the best of the original Luke figures, it gets top marks in both design and playability. 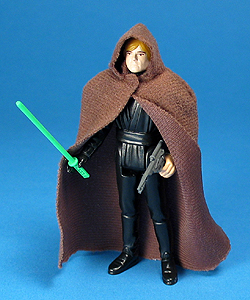 Austin's Analysis
Between the denizens of Jabba's palace in the first act and the Ewoks in the second, Return of the Jedi provides Kenner with plenty of new & colorful characters to turn into toys (which, of course, is a criticism often leveled at the film). Kenner certainly responds, releasing an enormous first wave of figures filled with a larger-than-ever assortment of main characters (Luke, Leia, Lando), troop builders (the cool-as-hell looking Biker Scout & Royal Guard figures), and aliens alike. But even beyond quantity, Kenner steps up their game in the quality of these figures. More dynamic and character-accurate sculpts, more detailed and well-crafted accessoriesm more overall playability. Everyone, from Luke to nameless Jabba palace guards, gets soft-good clothing (when applicable). Figures have removable helmets, which add to their play-ability: buy a Leia in Boushh disguise, and you get two figures, a disguised Leia, or the bounty hunter Boushh, while Lando is Lando, but can also round out your assortment of Jabba goons. All of this combines to make the wave feel like a big step forward for the line. For as much as Jedi can get grief about being a crass vehicle for merchandising, Kenner, at least in this first wave, seems to have done its best to make the merchandise as worth the money as possible.
Newer Post Older Post Home
Posted by Austin Gorton at 12:00 PM