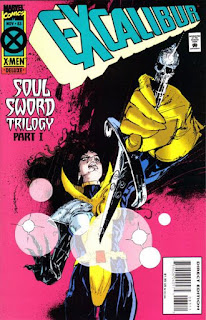 In a Nutshell
Warren Ellis' run begins as forces converge on the Soulsword.

Plot
Bishop arrives on Muir Island with a shipment of research equipment, and new clothes for Kitty, courtesy of Jubilee. On vacation in Egypt, Amanda Sefton encounters her mother Margali, who warns her that Gravemoss, a sorcerer ahead of Margali on the Winding Way, is plotting to retrieve the Soulsword and use it to cement his power. Back on Muir Island, Meggan suddenly goes into convulsions while sprouting spikes all over her body. As Moira anesthetizes her, she asks Kitty for help, but Kitty ignores her. Instead, she disdainfully goes through the clothes Jubilee sent. In London, a sorceress who feels crippling pain whenever the Soulsword is drawn vows to kill the possessor of the weapon. On Muir, Kitty searches through Moira's room. When Moira discovers her, Kitty knocks her over, then draws the Soulsword from her chest & declares she'll have to kill Moira. Nightcrawler, responding to the crash of Moira's fall, attempts to teleport to her room, but in the split second he travels through an alternate dimension while teleporting, Gravemoss takes control of his body.

Firsts and Other Notables
Warren Ellis becomes the series' regular writer with this issue, a role he'll maintain through issue #103. Part of the "British Invasion" of comic writers in the early 90s, Ellis got his start at Marvel on the short-lived Hellstorm series, along with some work on the 2099 imprint, before coming to this book. Nowadays, he's one of comics most famous (and polarizing) writers, having helped usher in the era of "widescreen comics" with The Authority and seen a number of his works adapted to other mediums.

Excalibur, on the whole, is a series defined by three distinct artistic runs, with all the various fill-ins and shorter runs by other creators working in the shadows of/killing time between one of the Big Three: the original Claremont/Davis run is one, and Alan Davis second, solo, run is another. Warren Ellis' run is the third.

He kicks off his run with the "Soulsword Trilogy", a three part story exploring the status of Illyana's Soulsword in the wake of her recent death while picking up on the "Winding Way" concept introduced by Scott Lobdell in issues #76-77 to play up the more mystical elements of the series (something which will be a hallmark of his run). To that end, he introduces a pair of new characters in this issue. The first is Gravemoss, a necromancer just ahead of Margali on the Winding Way, capable of possessing people. 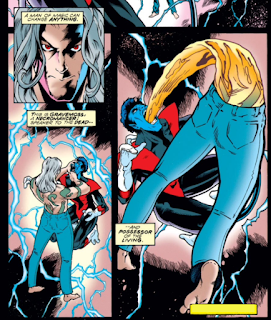 The other (unnamed in this issue) is Shrill, a sorceress who has had one eye replaced with the same metal from which the Soulsword is derived, and who experiences massive pain whenever the sword is drawn on Earth. Neither character has, to date, appeared outside this story.

This story on the whole plays pretty fast and loose with the continuity of the Soulsword and its relationship to Illyana, but most of that comes out in the subsequent chapters. Here, it's worth noting that Shrill is in possession of a couple pieces of metal (her eye, a brooch) said to be made of the same material as the Soulsword, which doesn't really make sense, since the Soulsword was supposed to be crafted from Illyana's soul (it's more or less "the focused totality" of Illyana's magical powers). 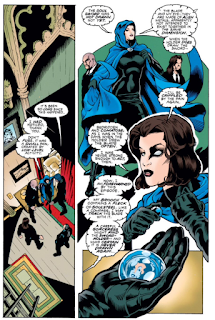 Creator Central
With Ken Lashley, the theoretical regular artist of the series apparently in need of a break after drawing half of the previous issue, future Generation X and Uncanny X-Men (and overall superstar) artist Terry Dodson fills in on this issue, in what is, I believe, his first work for Marvel.

The cover and front piece are from Bill Sienkiewicz. There's an additional note stating the story was based on an idea from Scott Lobdell.

A Work in Progress
Ellis introduces the concept of Kitty having “outsider moods”, semi-regular periods of time in which she revels in being alone, something I don’t think ever gets referenced outside this story. 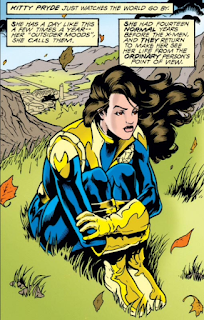 Seeing as how Kitty’s age will become something of a hot button issue during Ellis’ run, it’s worth that narration here says she was fourteen when she first met the X-Men (though she was in fact 13).

He also proceeds to immediately sex her up (another oft discussed Ellis-ism). 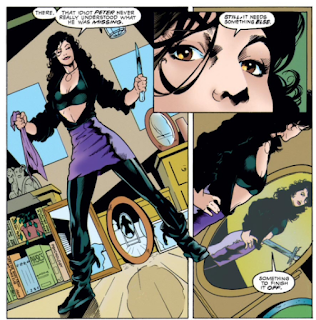 It’s said that part of the Winding Way involves periods of extreme power being followed by one’s of low power for the magic user. 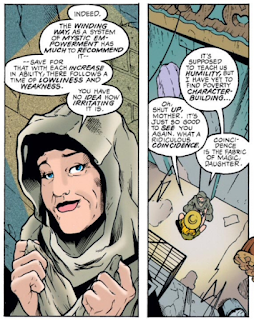 Austin's Analysis
Warren Ellis *finally* arrives, and his impact is felt immediately. There's a consistency & level of craft to this issue that had been lacking in previous ones (which often felt cobbled together by a committee), character voices are distinct, and even in his first issue, there's a sense of the cheeky style that will define his run. This is far from perfect - Kitty's transformation is a bit too abrupt, some of the Soulsword continuity is a bit loosey-goosey, and the ending - in which Gravemoss makes his first appearance by possessing Nightcrawler - feels less like a cliffhanger than an arbitrary (and abrupt) stopping point because the issue ran out of pages. But it's difficult to oversell just what a difference, in just one issue, having a competent writer with a vision for the series & a decent grasp of the character makes. Clearing the low bar set by the majority of the previous post-Alan Davis issues isn't that much an accomplishment, and Ellis' run will have it's up and downs, but through it all, the series will be his in the same way it was Davis' & Claremont's before him, and it will be all the better for it.

Next Issue
Next week: Generation X #1!