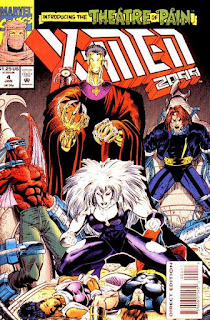 Plot
In the New Mexican desert, Bloodhawk is attacked & captured by La Lunatica. At Nuevo Sol, the X-Men are salvaging what equipment they can when Meanstreak receives a message from his friend Jordan Boone indicating he's in some kind of trouble. When Xi'an refuses to let Meanstreak go to New York to help him, Meandstreak leaves anyway, prompting Xi'an to send Krystalin & Fitz after him. Elsewhere, Bloodhawk wakes up inside the Theater of Pain, where Lunatica uses her mutant power to trigger painful memories, which Controller Thirteen records for the benefit of their patrons. Having been tasked by Brimstone Love with capturing the mutants who attacked Las Vegas, the Controller sends Lunatica after Bloodhawk's allies. She tracks them down at a truck stop where Krystalin & Fitz catch up to Meanstreak, and captures all three. However, when Lunatica trigger's Fitz's memory of the death of his girlfriend, his power activates, destroying the Controller's equipment, including the inhibitor collar controlling Lunatica. Freed after ten years of service, she attacks the Controller, while the freed X-Men continue on their way to New York in search of Boone.