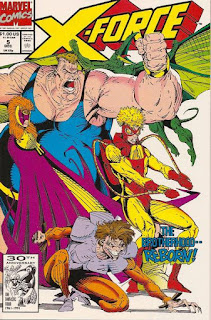 "Under the Magnifying Glass"
December 1991

In a Nutshell
Sauron is reborn as Toad sets about reforming the Brotherhood of Evil Mutants.

Plot
Deadpool delivers Juggernaut and the wounded Black Tom to Mr. Tolliver. Three days later, Dr. Karl Lykos returns home to find his girlfriend Tanya a captive of Toad & Blob, who intend to reform the Brotherhood of Evil Mutants with Sauron as a member. Meanwhile, Gideon appears on TV, blaming X-Force for the terrorist attack on the World Trade Center, but both Cannonball and Boom-Boom agree to stick it out with the team, despite their reservations about Cable's withholding nature. As Warpath runs through the forest, Shatterstar trains in the Danger Room and Cable offers Siryn a place with the team, which she accepts. In DC, the Commission on Superhuman Activities meets to discuss what to do about X-Force, with Bridge given a mandate to capture, but not kill, Cable. In Manhattan, Toad forces Dr. Lykos to absorb Tanya's lifeforce, killing her and transforming Lykos into Sauron once more.

Firsts and Other Notables
Though they don't appear in full in the issue (only on the cover), this is considered the first appearance of the new Brotherhood of Evil Mutants, formed by Toad and comprised of himself, Blob, Pyro, Sauron and Phantazia, as well, at least initially, as Masque and some generic Morlock goons. It's nice mix of original members (Toad), Mystique-era members (Pyro and Blob) and new recruits (Sauron and Phantazia), and this group will make recurring appearances throughout the X-books, effectively serving as iteration of the group for the early 90s.

Speaking of Phantazia, she technically makes her first appearance on the cover of this issue. Reading this story as a kid, I assumed she was an existing character whom I simply didn't know much about; only later did I learn that she was created just to be part of this iteration of the team.

Sauron, last seen in Marvel Fanfare #4, returns this issue. In that story, Dr. Karl Lykos was seemingly cured of ability to transform into Sauron (with Claremont at one time toying with the idea of instituting Lykos as the school nurse in New Mutants). Since then, he's apparently returned to New York and is living with his longtime girlfriend, Tanya Andersen. All of which comes crashing to a halt when Toad and Blob capture Lykos and force him to feed on Tanya's life force, killing her and causing Sauron to reemerge. 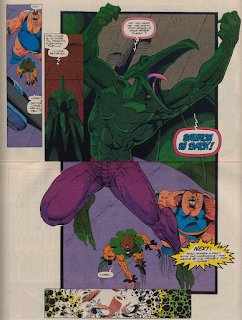 In the wake of their terrorist attacks last issue, Juggernaut and Black Tom are taken by Deadpool before Tolliver, whom we see for the first time (though he is of course shadowy and indistinct, aside from wearing some kind of fedora). Tolliver agrees to provide a doctor for Tom, which will lead to his upcoming mutation and redesign into a quasi-tree person in the first Deadpool miniseries. 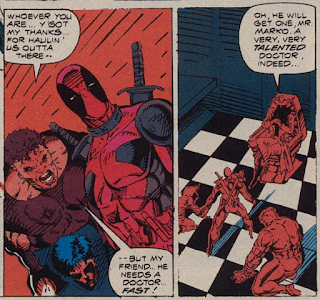 Siryn formally joins the team this issue, accepting an offer from Cable. His comment about using someone with her experience on the team (despite the fact that she's made all of handful of appearances prior to this series, and spent most of her time hanging around Muir Island) is probably what led young me to wrongly assume that Siryn made lots of appearances somewhere prior to becoming a mainstay of this series. 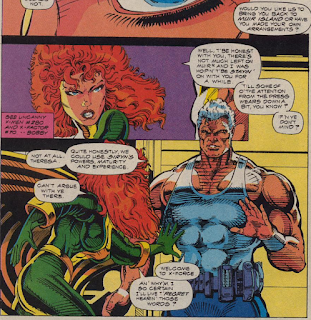 Creator Central
Though Liefeld is the only credited artist on this issue, per this Legends Revealed column, two other artists, Marat Mychaels and Brian Murray, actually penciled the issue over Liefeld's layouts. Which makes sense, as the art in this issue seems "off" (most notable in a page I post below), respective to Liefeld's art in previous issues (in some cases, the art here is, in fact, technically better than Liefeld's). It's also the first indication that Liefeld is either falling behind on deadlines and/or checking out on the series, as similar shortcuts/fill-ins begin to crop up over the next half dozen issues before Liefeld shifts to plot-only credit and leaves for Image.

A Work in Progress
Toad refers to Sauron as a mutant, which I guess is technically correct, in that he was mutated by a genetic virus after being bitten by a mutant pteranodon, but isn't quite the same context as what we usually think of when the term "mutant" is used (ie he wasn't born a mutant).

Toad lays out the goals of his new Brotherhood. 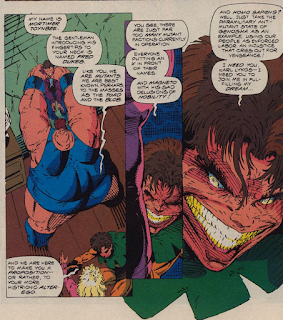 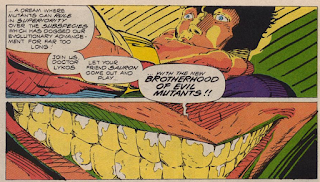 No mention is made of how Blob (and Pyro, not appearing in the issue but in the group shot on the cover) escaped from Iraq following Freedom Force's disastrous final mission in the 1991 annuals, but I believe it later gets established (outside this story) that Toad helped back them out of Iraqi jail.

X-Force apparently now has a Danger Room in their new base, as that's what a narrative caption describes the setting of Shatterstar's training scene as.

In the meeting to discuss how the government will handle X-Force, it's decided that the new X-Factor isn't ready yet to face them.

Project: Wideawake, the secret government project intended to handle the mutant problem, formed in the wake of the assassination attempt on Senator Kelly back in Uncanny #142, is mentioned here. 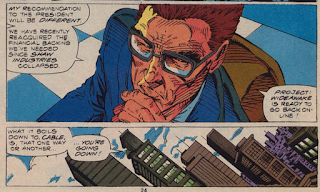 The Cable Guy
This issue establishes that Cable, Domino, Bridge and Kane all worked together as a group in the past (previous issues established they had a shared past; this just fleshes in one of the details of that past).

The Grim 'n' Gritty 90s
Gideon appears as a talking head on a news report regarding the World Trade Center attack in the previous two issues, denouncing Cable, and we're expected to believe people are taking this guy with a pony tail of green hair spouting out the top of his otherwise-bald head seriously. 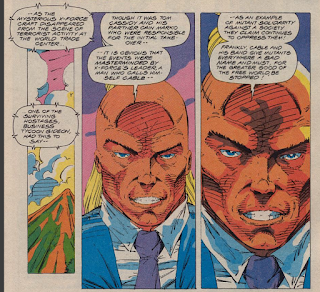 Warpath spends a couple pages angstily running through the woods, angry in general at the atrocities committed against Native Americans (he also calls out Frost, Shaw and Leland as objects for revenge; while its understandable he hasn't learned about Frost's fate yet, or possibly even Shaw's, he should be well aware of Leland's death, as it happened before "Mutant Massacre", at a time when Warpath was still part of the Hellions).

501 Genes
A pretty clear example of pencils not drawn by Liefeld is this page, though Boom-Boom's feet still suffer from the usual Liefeld Foot Aversion, here just sort of fading away into nothingness (though that could be more a result of deadline pressures than Foot Aversion). 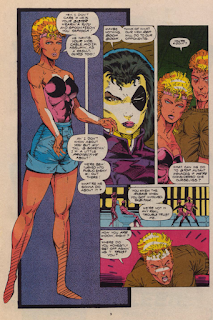 Also, Shatterstar's hair goes from "long enough to hang out and over the edges of his big poofy helmet" to "short, military-style buzz cut" between panels.

It's in the Mail
A letter writer in this issue suggests the idea of Douglock, a resurrected form of Doug Ramsey and Warlock. The response laughs off the idea as absurd/unlikely, but within a couple years, we will indeed have a character named Douglock operating as a member of Excalibur.

Austin's Analysis
While this is the least proactive/EXTREME! issue of the series yet (there's barely any action in it all), Gideon pinning the blame for the World Trade Center attack on Cable and X-Force, is actually a fairly significant development for the series, as it's the thing that really cements "X-Force" as an outlaw team. Prior to this, they've been (kinda) acting like a proactive strike force, but nothing they were doing (outside of Cable's attempt to kill Black Tom last issue) was all that further outside the legal limits than what the X-Men usually do. That changes with this issue: while they weren't actually behind Black Tom's attack, the world now believes they were, cementing them as outlaws on a larger scale than the X-Men (who mostly act unilaterally, without official sanction, but aren't considered out-and-out terrorists by most reasonable authority figures). The idea of X-Force as an outlaw band, even amongst outlaw superheroes, really comes to define the team, and sticks around far longer than the initial setup of being an proactive team that takes the fight to the bad guys.

All that aside, this is a surprisingly quiet issue, one dealing with the fallout of the last story, while reintroducing a classic villain as setup for the next storyline (which will run over the next five (!) issues). And while there's certainly nothing wrong with a quiet issue, it definitely feels more out of place in this series, which thus far, has been defined by some fairly energetic (albeit mostly nonsensical) plotting. Combine that with the lesser presence of Liefeld on art, which is the series' other defining characteristic (even though it's not very good, Liefeld's art is almost a character unto itself at this point in the series), and this feels like a "down" issue, even though it's technically just doing some of the same things other series get applauded for doing.