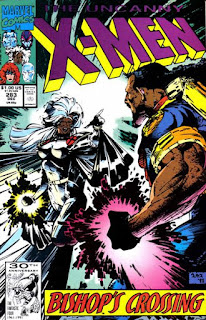 In a Nutshell
Bishop battles the X-Men.

Plot
Bishop, Malcolm & Randall proceed to round up Fitzroy and his criminal cohorts, only to learn that Fitzroy's portals are one-way, preventing them from returning to their home time. With no other option, Bishop authorizes the immediate termination of all the criminals, something which Storm can't abide. The X-Men intervene to stop Bishop, and Fitzroy manages to slip away, only to be caught and taken away by agents of Shinobi Shaw. As Bishop battles the X-Men, he wonders if they really are the legends he grew up admiring, but slight variations between them and the stories he was told convince him they are just agents of Fitzroy. Meanwhile, Professor X returns Jean's consciousness to her body, while the captive Fitzroy demands the arbitration of the Gamesmaster, who finds in Shaw's favor. Back at Fitzroy's base, charges he set begin to detonate, allowing Bishop, Malcolm & Randall to escape. But as the X-Men fly home, Storm remains insistent on finding Bishop and answering the questions he's raised. Elsewhere, Gamesmaster meets with Selene, who is pleased with the progress of her Upstarts game.

Firsts and Other Notables
As part of a general ramping up/bigger tease for the Upstarts storyline, Gamesmaster makes his first appearance in this issue, and is presented as being the arbiter of the Upstarts competition. We will eventually learn he is an omnipath (which is basically a super-charged telepath who is always in mental connection with every mind on the planet) who launched the Upstart competition as a way to distract himself, but as with so much of the Upstarts plotline, that idea is never really developed and/or outright contradicted by other teases/reveals related to the plotline. 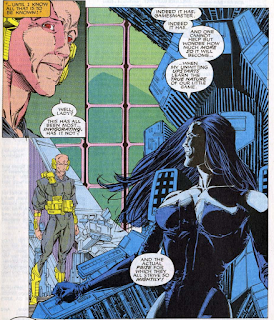 To wit, Selene returns this issue, making her first appearance in an X-book since New Mutants #75, and is suggested to be the secret power behind the Upstarts competition (and thus further tying that competition to the idea, suggested in this story, that the ultimate prize is control of the Hellfire Club, something else that will change often in the months ahead), though her role in the competition will also morph over time, and she suggests here that the true prize is something else entirely.

Jean is returned to her proper body this issue, thanks to Professor X, though Emma Frost remains unconscious (and in a coma, we'll soon learn). In the process, Byrne (scripting the issue) seems to rollback slightly the idea that Jean always had telepathic powers that were suppressed by Xavier for her own good as a child, dusting off the notion that Xavier "shared" his telepathic abilities with her when he faked his death back in the Silver Age. 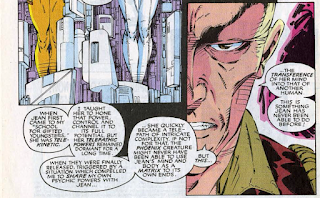 Pretty lackluster cover on this one. Just two figures facing each other, with one of them mostly blocked from the viewer, with no background or additional details whatsoever.

A Work in Progress
Though the future police force to which he belongs is not named this issue, the patch on Bishop's shoulder reads "Xavier's School Enforcers", which will be confirmed as the name of the organization (and is also the name of one of my fantasy football teams, incidentally).

This issue also establishes Bishop's mutant power: the ability to absorb and redirect energy. Basically, if you shoot with him energy, it won't affect him, and he'll be able to redirect that energy back at you (usually via generic energy blasts, though this issue suggest he returns the blast in the same way he received it, ie hit him with an eye beam, he'll shoot back via an eye beam). It's a simple enough power on the surface, though it doesn't hold up well to much scrutiny (for example, he absorbs Storm's lightning bolt, but does the heat from such a thing still effect him? He can absorb the energy of Cyclop's blast, but could just a blast still knock him over, since Cyclops' blast is concussive?). 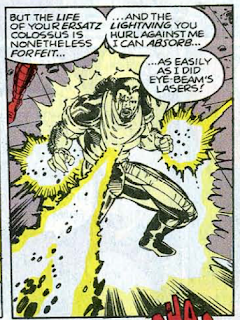 It's established quickly that Bishop views the X-Men as legends and carries a great deal of reverence for them, but finds the real ones he encounters to be lacking (which becomes a recurring theme for the character, coming to terms with the difference between legend and reality). 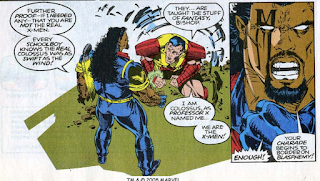 In a random moment, Iceman makes a snarky comparison between Storm and Cyclops' leadership abilities.

Shinobi pops up in this issue, his finger having been reattached, and wearing some kind of weird, brightly-colored uniform, attended by a group of random people wearing similar attire. Regardless, this particular look/entourage is never seen again.

Days of Future Redux
Storm wonders if Bishop hails from the "Days of Future Past" future; later stories will confirm his time of origin to be a few decades after the notable events of that story. 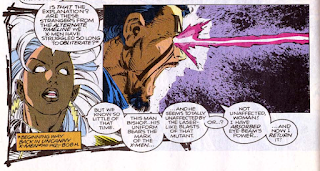 Bishop notes that Archangel looks like Angel but not quite, suggesting that in the DoFP timeline, Warren was never transformed by Apocalypse. 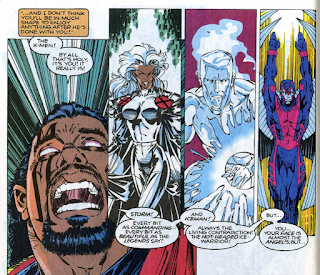 For Sale
There's a half page ad in this issue for the two-volume Photojournal Guide to Marvel Comics, a set of over-sized hardcovers, they contained pictures of the cover to nearly every Marvel comic at the time (so basically a print, Marvel-only version of today's GCD). While I never owned the set (they were expensive!), I checked both volumes out from the library religiously as a kid, and along with Les Daniel's coffee table book on the history of Marvel Comics from around this same time, they served a my introduction to a lot of Marvel lore in those pre-Internet, largely pre-reprint collections days. I of course found myself liking the older Silver Age covers, because they contained more text than the modern covers, enabling me to both get a better understanding of the contents of the issue, and giving me something to do with the book besides just look at it. 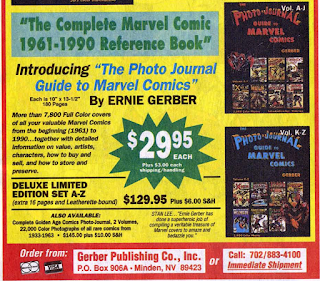 Austin's Analysis
Although last issue is considered the first appearance of Bishop for collecting purposes, this one serves as his proper introduction, as it's really almost entirely about him. To the credit of Portacio (and whomever else in the braintrust - Harras, possibly Byrne - involved in his creation) he emerges on page more or less fully-formed, at least in terms of his dominate characteristics going forward in the near future: his enmity towards Fitzroy, his role as a law enforcement officer from the future, his mutant power, his kewl/90s/EXTREME take-no-prisoners attitude, and his deep, abiding reverence for the X-Men (despite the fact that his 90s attitude puts him at odds with the X-Men, creating immediate conflict).

All of those elements will serve as the primary fodder for Bishop's story and characterization for the next several years (alongside the upcoming X-traitor mystery), and they're all pretty much right there on the page in his actual first appearance, making him one of the more fully formed new characters that we've seen in awhile; as much as Bishop gets lumped in with Gambit and Cable as paragons of the 90s, he doesn't fit the same "mysterious figure with mysterious origins and mysteriously mysterious motivations" mold as those two; Bishop is pretty up front about his whole deal (mutant future cop who takes no prisoners) from the get-go.

The rest of the issue is chiefly concerned with wrapping up this introductory Fitzroy story, such as it is, removing the villain from the board (a la Shinobi) for the time being, teasing the larger Upstarts storyline with the introduction of Gamesmaster and the reintroduction of Selene, and getting Jean Grey's mind back in her proper body, but all of that is really ancillary to the Bishop stuff. The point here is to introduce Bishop, and whatever comes of that character in the future (and for however else this little three part story suffers), it's hard to argue this doesn't do the job it was tasked to do rather well.

Next Issue
Tomorrow, Toad sets about reforming the Brotherhood of Evil Mutants in X-Force #5. Friday. a multiple Madrox melee in X-Factor #73. Next week, the first appearance of Cyber in Marvel Comics Presents #85-92 (Wolverine story).