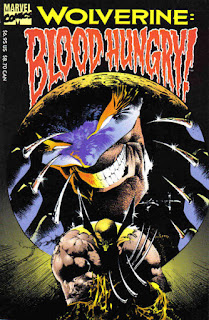 In a Nutshell
The first appearance of Cyber

Plot
Detecting a familiar scent on the air, Wolverine meets with Tyger Tiger, and learns that General Coy is meeting with a new drug supplier. Wolverine proceeds to investigate, and learns that the supplier is his old foe Cyber. The two fight and Wolverine manages to escape, but not before Cyber gashes his abdomen, drugging Wolverine with his claws. As Wolverine suffers vivid hallucinations, Cyber meets with Tyger, offering to sell the drugs to her instead of Coy. After settling on a price, he double-sells the drugs to Coy, setting up a conflict between the two, while Tyger finds the delirious Wolverine and helps bring him back to his senses. However, he is too scared of Cyber to help her, and when Tyger arrives to take possession of the drugs, she finds Coy waiting as well. Cyber proceeds to kill their men, but before he can attack them, Wolverine arrives. As he and Wolverine resume their fight, Coy and Tyger retire to discuss matters in the wake of Cyber's attack. Though Wolverine is once again doused with Cyber's hallucinatory drug, he fights the effects, and manages to gouge out Cyber's eye before sending him crashing into truck full of the drugs. With the drugs entering his system through his eye injury, Cyber freaks out, running into the ocean, where he ultimately disappears, leaving a weary Wolverine to return to Tyger Tiger for some much needed comfort.

Firsts and Other Notables
This story features the first appearance of Cyber (he first appears in shadow in issue #85, then in full in issue #86, but I believe #85 is usually cited as his first appearance), who will go on to be a minor recurring antagonist for Wolverine, first in his existing solo series and then in the later Wolverine: Origins series. He is yet another heretofore unmentioned figure from Wolverine's past, albeit one who seems to genuinely frighten Wolverine (I've not read much of Wolverine: Origins, so I have no idea what their past together entails, if that ever gets detailed).

His big schtick is that in addition to a little adamantium claw on each fingertip, he has adamantium skin. I don't know how he received his adamantium implants, since he never really shows up amongst the rest of the Weapon X crew through the years, but given his later role in Wolverine: Origins, I'm going to assume Romulus has something to do with it. Notably, Cyber's adamantium will serve as the source material in the first attempt to rebond the metal to Wolverine's bones (following its forcible removal by Magneto in "Fatal Attractions"), an ultimately failed attempt that leads to the infamous Noseless Wolverine. Aside from the introduction of Cyber, this story is notable for featuring art from Sam Kieth, who will go on to create the Maxx at Image Comics, in a series which will run for 35 issues (all plotted and drawn by Kieth) and inspire an animated series on MTV. Previous to this story, he also drew the first five issues of Neil Gaiman's celebrated Sandman series. He will provide interior art to a pair of upcoming Marvel Comics Presents stories, as well as a ton of covers for the series around this time. His work is surrealistic, with exaggerated figurework eschewing realism, but also with a very cartoony vibe.

This story ran concurrently with the Beast feature "Just Friends".

Creator Central
Peter David writes this story, and is the credited co-creator of Cyber, who he'll also use in an upcoming X-Factor story.

The Chronology Corner
This story takes place between X-Men #3 and #4 (Wolverine is still in his brown and orange costume), and between issues #47 and #48 of his solo series.

A Work in Progress
Both Tyger Tiger and General Coy, mainstays of Wolverine's Madripoor setting, feature heavily in this story.

Issue #86 establishes that Cyber has a vague, psionic mutant ability, but the exact details of how it works aren't revealed.

There's a legitimately funny bit towards the end of the story where Coy and Tiger are negotiating the proper response to Cyber's incursion, all the while holding guns on each other, from the field to having coffee, to playing ping-pong. 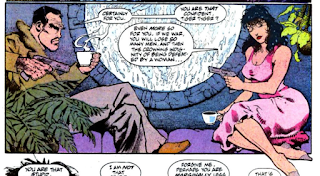 Pun with Peter!
Upon being introduced to General Coy, Cyber proclaims himself to be shy in response. 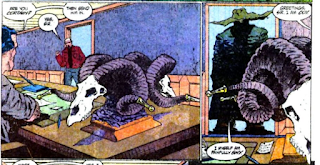 When Tyger gives Cyber a counter-offer, he responds by saying if he wanted a counter, he'd be at a diner. 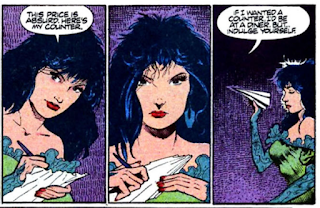 We also get the old "surely you're joking?/Don't call me Shirley" chestnut later in the story. 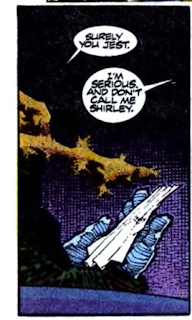 The Reference Section
David hangs a lampshade on Tyger Tiger's name, reciting part of the William Blake poem that inspired the name (as well as a bit of the Romper Room song).

The Best There is at What He Does
In issue #85, Wolverine is "hunting" a wolf, just trying to get close enough to touch, which recalls a similar scene with a deer in X-Men #109. 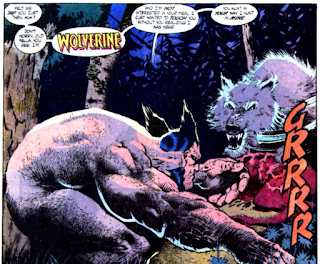 Something that will get played up a lot in future Wolverine origin stories, Wolverine suggests that the exact details of what Cyber did to Wolverine in the past have been blocked from his memory by his healing factor, because they are too painful. 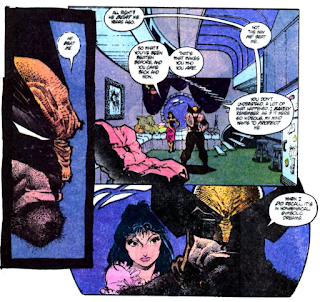 Austin's Analysis
As Marvel Comics Presents stories go, especially Wolverine ones, this isn't half bad. It's amazing what a difference an established writer and an artist with a distinctive style and vision can make in elevating a story (also witnessed in the preceding "Weapon X"). Given that, along with the heavy use of Wolverine's Madripoorian supporting cast, this could easily have worked as a two parter in the Wolverine solo series (cutting out most of the hallucination stuff, which just seems like padding to extend the story to the usual eight parts while giving Keith a chance to flex his artistic muscles), and would have stood out amongst the post-Claremont, pre-Hama issues.

Aside from the Keith art (which is quite nice - certainly not approaching anything like realism or even traditional comic art, but with a fun energy that fits the more darkly humorous tone of David's story), this story is notable for its introduction of Cyber. On the surface, he is yet another "previously unmentioned figure from Wolverine's past", one who is playing the 90s game of one-upsmanship (Wolverine has three adamantium claws and bones; Cyber has five claws - laced with poison - and adamantium skin!). But what helps Cyber stand out is that Wolverine is genuinely afraid of him, which enables us to see a side of Wolverine we've never really seen before (even in his early battles with Sabretooth, Wolverine never seemed terribly afraid of the villain, even if he was presented as stronger and more fierce than Wolverine). We don't get much specific explanation as to why (beyond "he beat me bad once upon a time"), nor am I even going to attempt to try to find meaning in the extended Grease/Happy Days hallucination that finds student Wolverine fighting teacher Cyber for a girl's affections beyond "Sam Keith wanted to draw that", but the important thing is that, for whatever reason, Cyber is the first foe to truly frighten Wolverine.

It's not quite the artistic achievement of "Weapon X", or even as pulply-satisfying as concurrent issues of Wolverine, but as the immediate follow-up to the former story, in a title that all too often presents mundane Wolverine stories lacking any artistic verve, connection to the character's ongoing storylines, or development of his character, "Blood Hungry" is a pleasant surprise.