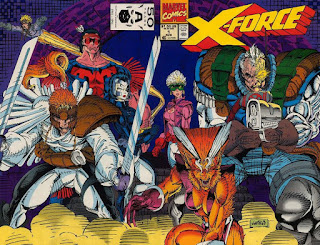 In a Nutshell
X-Force attacks the MLF and draws the attention of SHIELD.

Plot
After weeks of training, X-Force attacks the Mutant Liberation Front's Antarctic base. Though they take out a fair number of the MLF's troops, Stryfe manages to escape, triggering the base's self-destruct mechanism in the process. Meanwhile, Roberto and Gideon prepare for a corporate buyout meeting at the World Trade Center. Later, SHIELD commander G.W. Bridge inspects the remains of the MLF base, determining that Cable was involved and resolving to bring him down. Meanwhile, X-Force acclimates themselves to their new headquarters, Larry Trask's old Sentinel base in upstate New York, and Cable tells Sam a bit about his "son", Tyler. In Manhattan, Gideon and Roberto arrive for the meeting, but the head of the company being bought out announces she is refusing to sell, then brings in Black Tom Cassidy, who declares that everyone in attendance are now his hostages. In Canada, Bridge checks in with Nick Fury, who gives him a mandate to bring in Cable. Bridge then asks to be connected to General Clarke in the Canadian military, declaring it's time to bring in Weapon X.

Firsts and Other Notables
It's the first issue of X-Force, a series which will run for 129 issues, then get cancelled and restarted as X-Statix for another 26 issues, eventually settling in as one of Marvel's go-to "start it up, run it for awhile, then cancel and restart again" X-books in the 00s and 10s.

For a brief period of time (before the release of X-Men (vol. 2) #1 two months later, this issue held the title of the best-selling comic of all time, selling around 5 million copies overall. To date, it is still the second best-selling issue of all time (behind that X-Men issue). Of course, those sales were all to distributors/retailers, not to specific customers, which is why you can find plenty of copies hanging around in quarter boxes to this day.

Much of those sales were driven by the fact that this issue was polybagged (ie sold in a sealed plastic bag) with one of five different trading cards. Coming as the speculator market of the early 90s was just beginning to boom, this led to many fans buying multiple copies of the issue to assemble a full set of trading cards, and/or to have one copy to read, and one to leave unread, sealed in the polybag, in mint condition.

The five cards feature Cable, Deadpool (who, keep in mind, has made only one appearance at this point), Sunspot & Gideon, Shatterstar and X-Force as a whole. The card design is similar in style to the then-current second series of Impel's Marvel Universe cards. 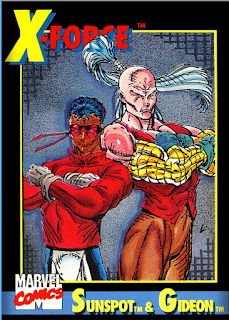 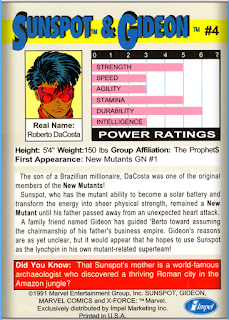 It also features a wraparound cover, another common gimmick of this era, though a less egregiously cash-grabby one. Of course, in true Liefeld fashion, a thin layer of dust adorns the bottom of the image, obscuring the characters' feet. And like other "hot" issues of this time, it received a second printing, which was releases sans trading cards.

SHIELD commander G.W Bridge makes his first appearance in this issue; a former partner of Cable's from his mercenary days, Bridge will be a recurring antagonist for X-Force in the early goings of the series (we'll eventually learn that "G.W." stands for "George Washington", making his name a pun beneath even Peter David). 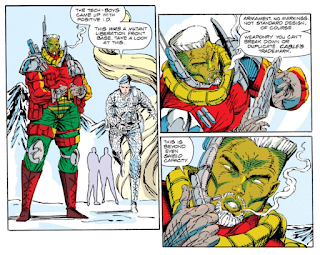 This issue establishes that X-Force has moved into Larry Trask's old Sentinel base in the Adriondacks, from X-Men #57-59, to use as their new headquarters, a nice (and surprisingly deep) use of continuity. It will remain X-Force's base until shortly before "X-Cutioner's Song".

It also reveals that Cable does indeed possess a mutant power, as he's shown levitating tools (technically, this could be a magnetic power, but it'll eventually be confirmed to be telekinesis), something he's keeping secret from the team (sans Domino, who already knows about his power) because mysteries. 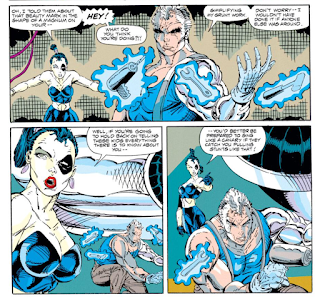 Mentioned previously, we get some more info about Cable's son, Tyler, most of which will turn out to be rendered blatantly false by future issues. Cable says Tyler was like a son to him (he actually is his son) who ended up getting captured and turned by Stryfe into becoming a member of the MLF (he is captured and turned by Stryfe, but in Cable's future and not as part of the MLF), where he ultimately died (Tyler is, unknownst to Cable, still alive). 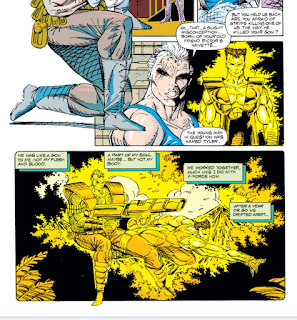 We see Cable (and X-Force) bodyslide for the first time this issue, teleporting from one location to another. We'll eventually learn this is facilitated by Cable's futuristic space station in orbit around the planet, and will become a frequently-used mode of travel by the character for a time.

Black Tom Cassiday, last seen in Marvel Team-Up #150, pops up in this issue, taking hostage a group of businessmen (including Gideon & Roberto) at the World Trade Center, which is setting up X-Force's next story arc. Also, he's apparently become enormous in size. 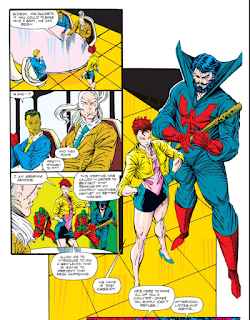 In the vein the Apocalypse Files that were included in recent issues of X-Factor, this issue includes excerpts from the Cable Guide, featuring Liefeld-drawn pinups and biographical information written from Cable's perspective. Included are Deadpool (whose entry mentions Wild Pack, making it, I believe, the first mention by name of Cable's former mercenary group, and also suggests Deadpool is chiefly motivated by money), Feral, Shatterstar (which reveals that Shatterstar is essentially stranded on Earth and has Cable say that while he agreed to help Shatterstar free his homeworld in exchange for joining X-Force, he never said when he's help him) and G.W Bridge (which contains a few hints about Cable's past as well). 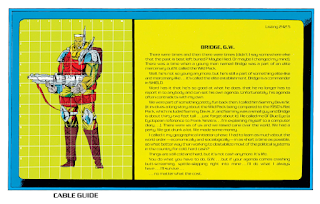 The issue ends with Bridge calling for Weapon X, a loaded name at this time (Barry Windsor-Smith's Weapon X story was running in Marvel Comics Presents when this went on sale). The new Weapon X will appear next issue.

A Work in Progress
The Sunspot/Gideon cards lists them as members of a Group called the Profit$, and suggests that Gideon wants to build his own mutant team; neither of these ideas. ever appears outside this card.

Cable nags Shatterstar about learning the proper way to tell time and call out positions during battle. 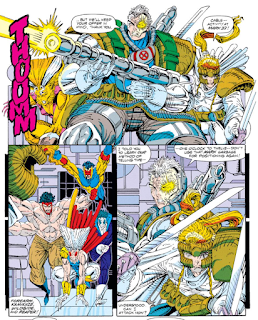 Shatterstar cuts off Reaver's hand this issue, a detail which will, surprisingly, stick for the character moving forward. It is unclear which, if any, digit on that hand is a thumb, because Liefeld. 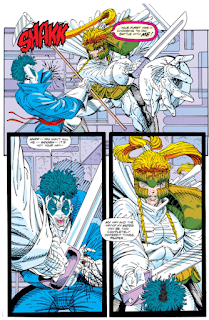 Stryfe knows that Cable's name is Nathan, though he suggests it's just an alias (it's not). 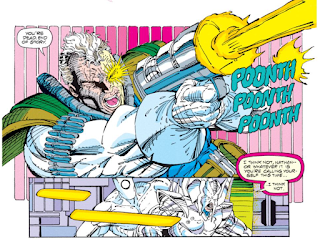 Cannonball notes that they've spent six weeks training for the attack on the MLF.

Meanwhile, it's revealed that Roberto has been with Gideon, learning the ropes of business, for six months, meaning at least that amount of time has passed since Roberto left in issue #99. Given that #99 more or less led directly into #100, most of that six months time had to have passed between issue #100 and this one.

The Cable Guy
The self-destruct code for the MLF base is "Nathan 0-0-0", clearly an attempt to tease the Stryfe/Cable relationhip following the reveal in New Mutants #100 that both characters share the same face.

Cable's uses the oath "Stab his eyes!" for the first time, as Stryfe escapes; this will quickly become something of catchphrase for the character.

Nick Fury apparently believes that Cable is worse than Hydra or AIM, which seems like a pretty laughable attempt to build up a pet character by tearing down long-established ones.

To the EXTREME!
Cable admonishes Feral's bloodlust during the battle withe MLF, saying they'll only kill in self-defense. Which, granted, is different than the usual policy of the X-Men never killing, no matter what. 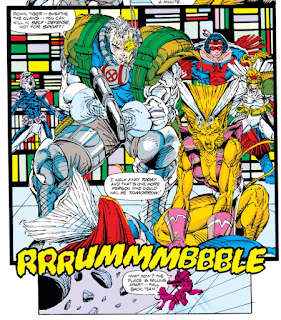 The Grim 'n' Gritty 90s
X-Force's new base is referred to as "Chalet Schwarzkopf".

This is a #1 issue polybagged with one of five trading cards sealed inside drawn by Rob Liefeld. That's pretty much the 90s in a nutshell. 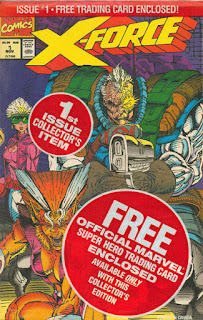 Artistic Achievements
Liefeld, who will present an all-sideways issue in #4, experiements with layout a bit here, turning in a sideways double page spread of Stryfe observing the battle. 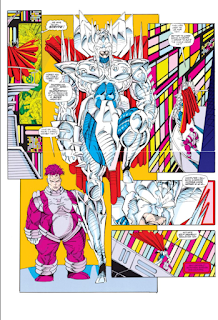 501 Genes
I called out a few particularly egregious Liefeldisms already, but they're replete throughout this issue. I mean, just pick a page at random and you'll find some bit of odd anatomy or a questionable storytelling decision.

Teebore's Take
X-Force, at least under the auspices of Rob Liefeld, will very quickly become very not good, but as first issues go, this isn't half bad, even while it's also not the groundbreaking achievement it was, perhaps, touted as at the time. It begins with a big action sequence that effectively introduces the characters and their powers (mostly - Domino continues to do little besides be vaguely motherly and pilot stuff) to any potential new readers, featuring the closest thing the main characters have to archenemies at this point, and in doing so it give this book's audience plenty of what they likely came to see: pure Liefeldian art. Then it settles in for a bit of setup: introducing the new headquarters, a new antagonist in Bridge, some potential new plotlines and mysteries. It's routine but effective first issue stuff.

Of course, X-Force's big claim to fame, the thing that supposedly sets them apart from the X-Men and required the change from being "New Mutants", is that they're the extreme team of mutants, who shoot first and ask questions later, who aren't afraid to get their hands dirty doing what needs to be done, etc. But as much as this reads like a pretty typical first issue, it also reads not all that differently from a typical X-Men issue. Yes, X-Force is shown taking the fight to the MLF in the opening pages, but nobody is killed in the ensuing fight - Reaver loses a hand, and Feral wants to kill people, but that's not all that removed from the usual "Wolverine holding his animal instincts in check" kind of material. Even Shatterstar says he's withholding from killing in deference to his new teammates' desires.

Presenting heroes who want to kill, even if they don't, ultimately, was, arguably, a departure from the usual ethics of the X-books at the time, in 1991 certainly moreso than today. But for all the sword- and gun-wielding characters in this book, for all the talk of X-Force is doing things differently and that the characters are soldiers now, in execution  it's really not that different from any other superhero book in any but the most cosmetic ways, and that's something the series will struggle with, particular in this early goings as Rob Liefeld tries to convince us how badass this all is. But the question of what makes X-Force different from any other team of mutant superheroes is also something with which the series will grapple, to both its detriment and benefit at varying times, pretty much throughout its entire existence.