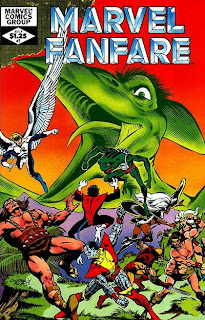 In a Nutshell
The X-Men battle Sauron in the Savage Land.

Plot
Issue #1: Tanya Anderssen visits Angel at his Aerie and asks him to help her journey to the Savage Land. Thanks to a recent article, she believes her lover, Karl Lykos, is still alive and living there. Though Angel worries that Lykos may be in the Savage Land to keep his villainous alter ego of Sauron in check, he agrees to help Tanya. When word of the expedition gets out, J. Jonah Jameson, sensing a story, sends Peter Parker along with Angel and Tanya. Reaching the Savage Land, their helicopter is destroyed by a Pterosaur. Reaching the ground safely, they are attacked by the Savage Land mutants created by Magneto. Tanya escapes, but Angel and Spider-Man are captured, taken to Garokk's destroyed citadel, and used to test a machine meant to devolve them.
Issue #2: Tanya is found by Ka-Zar and is finally reunited with Karl, but the group is attacked by barbarians led by the horribly devolved Spider-Man and Angel, and Tanya is captured. At the citadel, the Savage Land mutants' leader, Brainchild, uses the devolution machine on Tanya. Ka-Zar and Karl attack the citadel, destroying the machine in the process, but Karl is able to drain the mutant energy from Spider-Man, Angel and Tanya, restoring them to normal. However, the influx of energy causes Karl to transform back into Sauron, who flies off, declaring war on the Savage Land. As Angel and Spider-Man leave the Savage Land, Tanya decides to stay, still hoping to help Karl, and Angel promises to ask the X-Men for help. 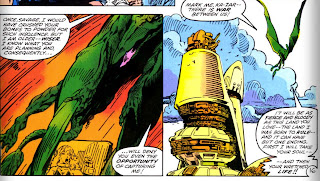 Issue #3: The X-Men meet Angel at an Antarctic UN base. They enter the Savage Land and are attacked by a group of Savage Land mutants, which they easily defeat. Their prisoners lead them to Garokk's citadel, now being used by Sauron and Garokk's former priestess, Zaladane. Unaware of a field surrounding the citadel which saps their willpower, the X-Men are easily captured by Sauron, except for Angel, who manages to escape before falling unconscious. Inside the citadel, Sauron uses the rebuilt devolution machine on the X-Men, intending to devolve/evolve them repeatedly in order to siphon off the excess energy, creating an unlimited source of energy on which he can feed. Meanwhile, Angel awakens to find he's been saved by someone.
Issue #4: Angel discovers he's been saved by Ka-Zar, and together they plan to attack the citadel and free the X-Men. As Sauron devolves then evolves Storm, he sees Angel flying overhead, and takes off after him. Bringing Storm to his quarters to serve as his mistress, Brainchild is attacked by Ka-Zar, who infiltrated the citadel while Angel distracted Sauron. Together, Storm and Ka-Zar free the other X-Men. Together, the X-Men are able to force Sauron to expend enough energy that he reverts to Karl Lykos. He begs the X-Men to kill him, but they tell him Professor X is working on a cure for his condition. Back at the mansion a few weeks later, Xavier does successfully cure Lykos, seemingly ending the threat of Sauron, and allowing Karl and Tanya to be together at last.

Firsts and Other Notables
Marvel Fanfare was the brainchild of Al Milgrom, a prolific writer/penciller/inker/editor for Marvel, who created the title to serve as a showcase for the industry's best talent. He edited the entire 60-issue run and contributed an illustrated column to each issue. Each bi-monthly issue was 36 pages long (usually containing a primary and back-up story) with no ads and printed on magazine quality paper, and thus usually cost twice as much as a regular comic book. The stories were a combination of solicited material and inventory material (stories commissioned by editors to serve as fill-ins when the regular creative teams of books needed a break) that was never used elsewhere.

Issue #4, pencilled by Paul Smith, is considered to be Smith's "audition" for X-Men. He gelled so well with Claremont, and Claremont was so impressed with his work, that Smith will eventually be asked to replace Cockrum as the regular penciller of X-Men when Cockrum leaves the book.

Though Claremont will return to the Savage Land again during his run, this story marks Claremont's final use of Sauron. Seemingly cured at the end of issue #4, Sauron will not return until after Claremont has left the book. Claremont has mentioned that he originally intended for Karl Lykos to stay on as the school's physician and become a supporting character in the upcoming New Mutants spinoff, but never followed through on that plan (and, as Jason Powell notes, "curing" Sauron and taking him off the board is also a brilliant way for Claremont to prevent himself from falling into repetition).

The Savage Land Mutates, the mutants created by Magneto in X-Men 62-63, return, and like Sauron, they are presumably taken off the board at the end of issue #4, as they are reverted to their original Swamp Men forms (though they will appear again in Claremont's run, with little explanation). 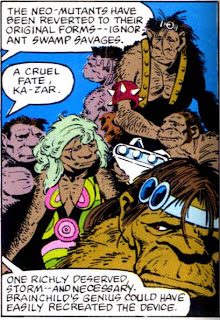 Vertigo, one of the Savage Land mutates, appears in issue #1 for the first time. She will go on to be a member of the Marauders. 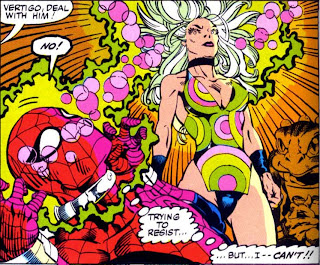 Zaladane, the high priestess of Garokk who last appeared in X-Men #114-116, also returns, and will also pop up again later in Claremont's run. 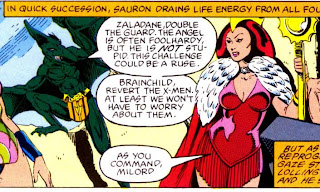 Cyclops doesn't travel with the team to the Savage Land in issue #3, as he is suffering from a cold, and Kitty is said to have stayed behind to look after him (though both appear in the final panel of issue #4), a bit of dialogue on Claremont's part most likely meant to cover for the fact that he wrote this story before Cyclops returned to the team in the issues of X-Men contemporaneous to when these issues were published. 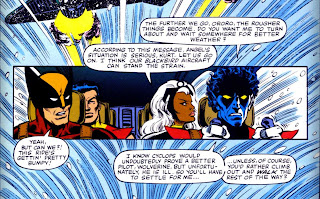 A Work in Progress
Angel has returned to his blue and white costume since leaving the X-Men in issue #148, and is back at his Aerie in New Mexico alongside Candy Southern (whose last name is occasionally misspelled "Sothern"). 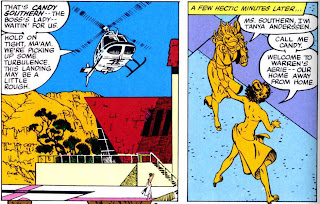 In fact, Angel's short-lived tenure with the team post-"Dark Phoenix" seems largely glossed over: a narrative caption in issue #1 refers to him having left the team in issue #94 and having since formed the Champions, with no reference to his more recent stint on the team. The only allusion to it is a comment by Wolverine in issue #3, about how Angel doesn't like his methods (the reason Angel quit the team), and even that could be read as a more general statement. 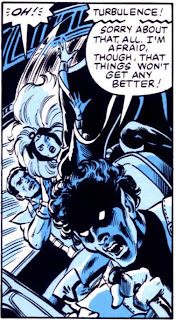 When Sauron hypnotizes the X-Men, it is depicted in a manner similar to the effect used in issues #61 and #115. 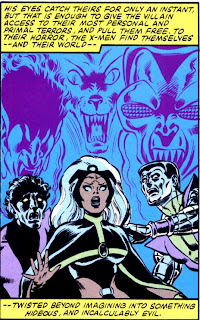 Issue #3 references a series of international military bases in Antarctic scattered around the perimeter of the Savage Land, meant to discourage the pillaging of the Savage Land's natural resources. Call me cynical, but I find it hard to believe the nations of the world wouldn't already be pillaging it... 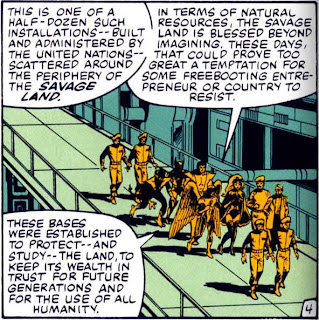 I Love the 80s
It is said that both the Avengers and the Fantastic Four are engaged in other missions, preventing them from assisting in the Savage Land, which is the usual excuse given for the absence of either team when a planetary crisis is afoot, back when Marvel was more concerned with maintaining the consistency of their universe.

Professor Xavier's curing of Lykos in issue #4 is rather abrupt and narratively-convenient, given the fast-approaching end of the story. "This may not work. Nevermind, it worked."

Claremontisms
Twice Claremont refers in narration to Colossus being "nigh-invulnerable" in his armored form, one of his favorite adjectives. 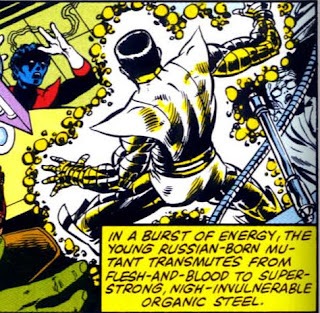 The Best There Is At What He Does
The aforementioned comment from Wolverine about Angel disliking his methods serves as another explanation of Wolverine's particular morals.

Teebore's Take
That Marvel turned to Chris Claremont and a story featuring Spider-Man and the X-Men (in part and then in whole) to launch a new title is a testament to the still-growing popularity of the X-Men in the early 80s. Claremont turned in a story that, especially in the final two chapters, would have felt right at home in the X-Men's regular book at the time: nothing groundbreaking or exceptional, but a nonetheless solid Savage Land story with the expected characterization beats that deals with, once and for all, Sauron (at least as far as Claremont is concerned). But the real star of this story is the art. Michael Golden, Dave Cockrum and Paul Smith, though all different in their own ways, each turn in stunning work for their individual contributions. Usually, my preference is to have consistent art across a story, but when each of the contributions are this good, the inconsistencies in style are made up for by the consistency of the quality. These issues aren't essential reading, but the solid story and the fantastic art combine to make them a fun read.

Next Issue: Uncanny X-Men #151
We return to the main title, as does the Hellfire Club.
Newer Post Older Post Home
Posted by Austin Gorton at 10:00 AM