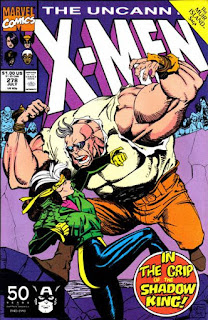 In a Nutshell
The X-Men launch their attack on Muir Island.

Plot
As the Shadow King gloats to Lian Shen about the level of hate & discord in the world empowering him, Professor X breaks into a WHO base and steals back the Blackbird from Excalibur. Meanwhile, on Muir Island, new arrivals Rogue and Guido fight in the arena, Moira's version of the Danger Room, and Rogue is stunned by how bloodthirsty both herself and the other residents have become. Not far away, Xavier meets with the X-Men, and they plan their next move. On Muir Island, Rogue is fully overwhelmed by the Shadow King, just as the X-Men launch their assault on the island. However, all but Forge are quickly attacked by one of the island's residents. Meanwhile, Professor X arrives on the grounds of the X-Mansion, hoping to use Cerebro to locate the presumed-dead X-Factor and locate the Shadow King. Just then, an out-of-control car careens down the drive, with the driver leaping free just before it crashes. As Xavier tends to the driver, Stevie Hunter, the Shadow King appears, projecting an image of the defeated X-Men just as the enthralled Colossus emerges from the fiery wreckage of the car.

Firsts and Other Notables
This is Chris Claremont's last full issue of Uncanny X-Men; he does about half of the next issue, and of course writes the first three issues of X-Men (vol. 2) before leaving the franchise entirely (I think, but I'm not entirely sure, he was officially already gone by the time this issue was on stands, with his work on #279 and X-Men #1-3 completed before this issue was printed). This marks the end of an impressive, unprecedented run of issues continuously written by Claremont stretching back to issue #94.

This issue kicks off the "Muir Island Saga" (a clear, if overreaching, reference to "The Dark Phoenix Saga", a title taken from its placement on the top right corner of the cover for each issue in the storyline. It runs through issue #280 of this series, as well as X-Factor #69 and #70, and effectively serves to close off the current iterations of the X-Men and X-Factor (and specifically end the long-running Shadow King subplot) and transition the series into the linewide relaunch that sees the debut of a second X-Men title and a revamped X-Factor (alongside the soon-to-debut X-Force).

Of course, the "Muir Island Saga" as presented is vastly different from how Claremont initially envisioned it, stitched together from leftover of "Mutant Wars" unused by "X-Tinction Agenda" and bringing to an end the Shadow King subplot where Claremont originally intended to merely move it to its second phase, not resolving it entirely until issue #300. A fairly thorough accounting of what might have been can be found here and here.

Both Rogue (last seen in the Savage Land in issue #275) and Guido (last seen abandoned by Lila in issue #274) are on Muir Island now, with Rogue the more recent arrival and both having been more or less inextricably drawn there, with nowhere else to go (we, of course, know this is because of the Shadow King's influence). Keep an eye on Rogue's costume; costume consistency is not one of this storyline's strong suits. 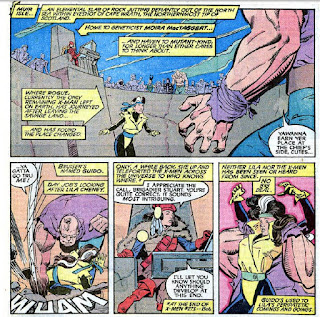 Tom Corsi and Sharon Friedlander are both still on the island as well, though they mention bringing Guido to the Morlock Healer, despite the Healer having died during the Reavers assault on the island in issues #254-255. 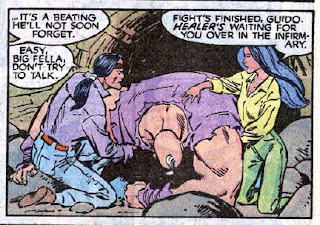 Amanda Sefton is on-hand as well, despite having not appeared with the Islanders during "Kings of Pain". However, likely thanks to the shift in writers next issue, she disappears from this story after this issue, without explanation; she next appears in Excalibur #75. Given that Fabian Nicieza wrote "Kings" and takes over from Claremont next issue, perhaps he doesn't like (or doesn't know about) the character.

Similarly, when Professor X experiences a worldwide static field inhibiting his telepathy in all but the shortest distances, he attributes it to the doings of the Shadow King (the Shadow King really shouldn't be able to do that, but maybe it's a more general "he's influencing the darkness in more and more people and that's causing the static" kind of thing), but later in the story, Polaris will be credited with causing the static.

Wolverine battles a Shadow King-controller Rogue, and though it mostly goes unremarked on, this is the first interaction between those two characters since just after "Inferno". Banshee and Siryn are seen interacting with one another on-panel for the first time since there first meeting, all the way back in X-Men #148. 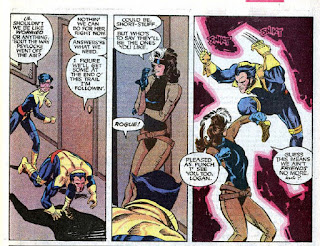 Banshee notes that Moira's odd behavior started when Lorna first showed up on Muir Island (in issue #253) but got worse after Lorna disappeared - in the first case, Lorna's new "absorb negative energy to get stronger but make people go nuts around me powers" are to blame, while things getting worse later is caused by the possession of Legion by the Shadow King, who captured Lorna because she was immune to his power. 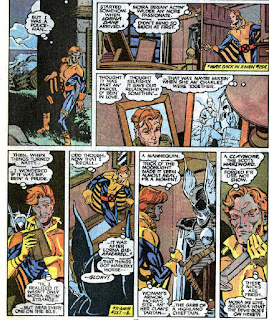 A Work in Progress
Lian Shen, the doctor whom the Shadow King enthralled whilst chasing Kid Storm in Cairo, Illinois and who was at his side during Gambit's debut, pops up in this issue, still his servant/aide-de-camp.

The headquarters of WHO, previously shown to be inside the Tower of London in Excalibur, is here said to be a far more pedestrian air force base.

Professor X wears the Shi'ar Warlord armor worn by his Skrull counterpart while stealing back the Blackbird that Excalibur took for themselves after "Inferno" in Excalibur #8, a nice touch of continuity. 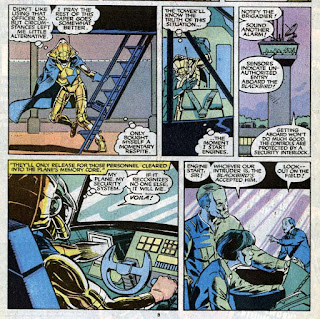 Excalibur is said to be gone (presumably, this is taking place while they're in Limbo during "The Promethium Exchange") and X-Factor presumed dead (as a result of Ship blowing up in X-Factor #66), though Professor X rightly points out that the world once thought much the same about the X-Men. 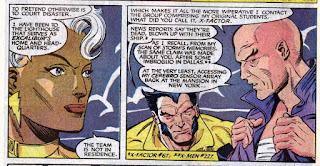 Forge uses the backdoor he built into the Muir Island security system, at Banshee's request, in issue #257, to get the X-Men onto the island undetected. He remains the one X-Men still free by the end of the issue.

Shadow King declares that Colossus is now "mine, body and soul".

Young Love
Forge mentions that he'd like to go flying with Storm sometime, the first acknowledgement (albeit a minor one) of their relationship/feelings for one another since Forge succeeded in his initial mission of finding her.

For Sale
The front cover ad is for the first (and only, I believe) set of G.I. Joe trading cards; I picked up a wax box of packs deeply discounted a year or two after their initial release and managed to assemble a full set; they're actually a really well-designed set of cards, with some great artwork in places.

It's in the Mail
The letter column in this issue runs a message detailing the upcoming shakeup and the issues involved in the "Muir Island Saga". Of note, Peter David and Larry Stroman are (correctly) announced as the new creative team on X-Factor (so Erik Larsen at this point is out) and Chris Claremont is (wrongly) still said to be writing Uncanny with issue #281, suggesting that maybe he hadn't quit yet (or quit after this editorial went to press). Also, both X-Force and Wolverine are hyped as well, but poor languishing Excalibur gets nary a mention.

Teebore's Take
On the whole, the "Muir Island Saga" is a bit of a mess, suffering from sloppy plotting and issue-to-issue continuity, the result of it being a story intended to transition an entire franchise of books from one status quo to another at the same time that a major creative transition is taking place in that franchise. But most of those problems rear their ugly head starting in the next chapter; this one is, suitably, all setup: bringing Xavier and the X-Men back to Earth and giving each a specific mission, bringing the Shadow King and his control of Muir Isle back to the foreground and ramping up his threat to a global scale, and establishing that both Rogue and Guido (two characters destined for larger roles in the franchise post-storyline) have joined the cast of diffuse X-characters hanging out with Moira, essentially awaiting their new series assignments.

Not surprisingly, given its role as a transitional story, all three Uncanny chapters of this story feature fill-in art. With Jim Lee off to greener, adjectiveless pastures, Paul Smith returns for this issue, and whether it's the absence of Wiacek's inks, the result of being a last minute fill-in, or just the passage of time (or something else entirely) his work is definitely lacking something from his earlier run on the title: everything seems zoomed out to roughly medium depth in every panel, making the action easy to follow but also not terribly exciting or dynamic. There are flashes of his old style in some of the figure work (especially his Wolverine, who looks very much like Smith's classic Wolverine) and his animation influences can be seen in some of the fight scenes, but overall it lacks the energy of Lee's previous issues as well as the energy and overall polish of Smith's earlier work.

Similarly, this issue represents some of the most workmanlike writing of Claremont's tenure; he still manages to work in a few Claremontian character beats, things like Banshee & Siryn fighting each other or Jubilee's excitement at flying, but for the most part, this issue is all plot mechanics, moving pieces into place for the next chapter of the story, with little concern for theme, symbolism or characterization. Perhaps had Claremont hung on to finish out the story himself, this would be less egregious in hindsight, but as it is, it's a relatively soulless final issue for the man who made the X-Men into what they are (including the soon-to-be highest-selling comic book characters of all time). Thankfully, his final, ultimate departure from the characters will be somewhat more resonant.

Next Issue
Tomorrow, "The Promethium Exchange" ends in Excalibur #39. Friday, the fate of Cyclops' son is revealed in X-Factor #68. Next week, another crappy (I mean, probably, right?) Excalibur oneshot, Possession.