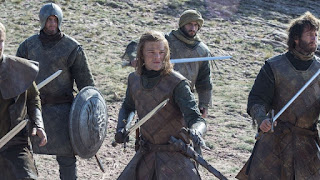 Meereen
Varys has his ways of getting information, doesn't he? He can find little birdies of information even in foreign land of Meereen. This time his birdies pointed hm to a women. (A prostitute, I believe?) Whatever her profession, this woman is aligned with the Sons of the Harpy and Varys intends to get her to talk.

Varys' method of interrogation is threatening the woman's life and the life of her son. It's a little jarring to see him this ruthless. But he keeps at it. The woman rightfully says that the Sons of the Harpy would kill her if she talked so she's screwed either way. Varys says that if she talks she gets safe passage out of Meereen. It's her best option and she takes it.

Meanwhile, Tyrion tries to make small talk with Grey Worm and Missandei and it goes over exactly the way you'd think an affluent playboy trying to joke around with two people who grew up in squalor and servitude would go over. Varys interrupts the awkwardness with the “news” that the Slave Masters are behind the Sons of the Harpy. I wouldn't think it would take an interrogation to figure that one out but to each their own.

The party reviews their options. A full on attack of Astapor and Yunkai would leave Meereen vulnerable. Also, taking over those cities by force didn't work the first time. It looks like diplomacy is in order.

Somewhere on a Boat
Sam is headed for the Citadel. Women aren't welcome at the Citadel. (Where are women welcome in Game of Thrones?) So Sam wants to leave Gilly and her son with his family in Horn Hill. Gilly doesn't want to leave him but Sam pukes, cutting the argument short. It's supposedly seasickness but maybe Sam is just sick at the thought of leaving Gilly and her son alone with his abusive father?

Vaes Dothrak
Daenerys arrives in Spinster City. She talks herself up but the head spinster lays down the law. If you're the wife of the Khal you can't do anything but stay there, if they even allow that. There seems to be some kind of option where Daenerys may be sentenced to slavery? Or death? What are they going to do? Burn her at the stake? I'd like to see them try that!

Way the Hell up North
Bran is having another vision of the past. This time it's Ned Stark facing Arthur Dayne, the greatest swordsman ever. Or one of them. I have no idea where he ranks against Jaime, Renly, Brienne, etc. There's a lot good swordsmen around.

Anyway, Arthur is good enough to fight off, like, 8 people at once. Ned is, seemingly, the last man standing as he tries to fight Arthur but he's losing. Luckily, Meera's father was still around and stabbed Arthur in the back. I think this is supposed to be a revelation about this fight or something but, really, nearly every battle in Game of Thrones ends with some cheap victory. Besides, would 8 people taking down Arthur be any more honorable?

After Arthur is dispatched there is a baby's cry coming from the Tower of Joy where Ned's sister is being kept. Just as Ned is about to enter the tower and confirm everything the audience has already figured out the vision is stopped by the Three Eyed Raven. Bran wants to see more but ole Thee Eyed knows you can't give everything away in third episode of the season!

King's Landing
Apparently Qyburn has taken control of Varys' King's Landing “birds.” They're young kids and they're easily swayed by strangers with candy. Way to adhere to the stereotype kids!

Braavos
Remember what happened in Braavos last episode? Well, pretty much the same thing here except it's occurring inside the House of Black and White. Although, when Arya resists Jaqen's bribes to get Arya to say her name this time Jaqen rewards her with a drink of water that gives Arya her eyesight back. So, yeah, Arya was blind for a whole three episodes. That was worth it.

Winterfell
Ramsay meets with...wait a minute, let me look it up...Smalljon Umber. Smalljon wants help dealing with the Wildlings that have been let through the Wall. Ramsay offers to help on the condition that his ass gets thoroughly kissed by Smalljon. But Smalljon kisses no ass!

Instead of kissing ass, Smalljon offers something better: Rickon Stark and Osha. The, sigh, severed head of Shaggydog is offered as proof of Rickon's identity. Ramsay's usual sadistic smile spreads across his face.

The Wall
Jon Snow is still alive and now everyone knows it. Jon walks around a bit to show off his sexy physique. Then he wants to know what it all means. Davos pretty much says it doesn't have to mean anything. Just accept the miracle for what it is.

Everyone pretty much views Jon Snow as a god at this point. Jon Snow doesn't get it. He's like, “Since when does coming back from the dead make you a god?” Well, to be fair, they don't have the Bible in the world of Game of Thrones.

Anyway, it's time for Jon Snow to get down to business. In the end, he's got Stark blood in him and if there's something the Starks love it's executing people in the name of honor and justice. So Jon Snow rounds up the treasonous Night's Watch members, most notably Ser Alliser and Ollie, and hangs them real good.

Jon Snow then gives up title as Lord Commander and leaves the Wall presumably for good as he states “My watch has ended.” I suppose your oath to the Night's Watch is no longer valid after death? Regardless, Jon Snow's outta there but I have no idea where he intends on going.

Other Thoughts
I'll be honest, I had to look up the name of Vaes Dothrak. I couldn't figure out what the hell was written on the opening map. I wrote down Oaes Dothpak.

What exactly do the Khal widows do in Vaes Dothrak?

Melisandre prays to the god of light to bring back Jon Snow and it works. She still seems to doubt her religion. Uh...what more proof do you need?

Game of Thrones is super nihilistic so of course Jon Snow saw nothing after he died.

I'm not sure if I was supposed to know Meera's father knew Ned.

I wish they could've got Sean Bean back for these flashbacks.

Also, Ned Stark making an attempt at a cool, action hero one liner!?

I really would have liked to see the scene where Rickard is actually kidnapped. Maybe we'll get a flashback?.

Is Jon Snow simply not worried about the White Walkers anymore?

Davos: You clean up as much of the shit as you can.
Jon Snow: I don't know how to do that. I thought I did, but... I failed.
Davos: Good. Now go fail again.

Arthur Dayne: And now it begins.
Young Ned Stark: No, now it ends!

Tyrion: A wise man once said a true history of the world is a history of great conversations in elegant rooms.
Missandei: Who said this?
Tyrion: Me, just now.