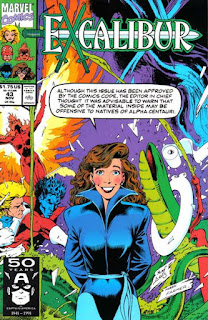 "Home Comforts (or Who Exploded the Toilet?)"
Early November 1991

In a Nutshell
The Nightcrawler/Meggan/Captain Britain triangle comes to a head.

Plot
Kurt dreams of Meggan, murmuring her name in his sleep, which enrages Brian, who overhears him. Already on edge due to the presence of Technet in the lighthouse and the ongoing repairs, he storms out. Technet continues to be underfoot, disrupting Kitty's work on Widget, destroying the building's one bathroom, and pestering Brian. Giving up, he attempts to fly off to his home in London, but the recently installed anti-gravity elevator messes with his takeoff, sending him crashing into the device and sending pieces flying. Seeing Kurt tending to Meggan, Brian's temper flares again, and he attacks Kurt, who defends himself. Their fight spills out onto the grounds, and doesn't stop until after Kurt's leg is broken, when Meggan intervenes and declares that while she loves Brian, she's not an object to be fought over. Saying she no longer feels safe, she flies off. Rachel pursues her, while Kitty gets a medkit for Kurt's leg. In the aftermath, Brian and Kurt reconcile. Just then, members of the Captain Britain Corp arrive and take Brian to Otherworld for immediate court martial. Meanwhile, on another plane of existence, Kylun and his rebel forces rescue his beloved, Princess Sat'neen, from Necrom, and declares that they will defeat him.

Firsts and Other Notables
The Captain Britain-Meggan-Nightcrawler triangle comes to a head this issue, with Brian confronting Kurt and the pair coming to blows. In the end, Meggan flies off, angry at both of them, and Nightcrawler asserts that while he's undeniably attracted to Meggan, he's not in love with her, and doesn't want to come between her and Captain Britain, while Brian admits some additional jealousy to the ease with which leadership comes to Nightcrawler and how the rest of the team follows him. 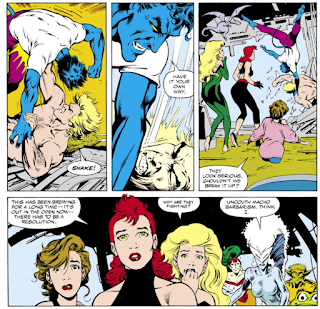 In the wake of their fight (in which Nightcrawler's leg is broken), Captain Britain is captured by a trio of alternate reality Captain Britains, for immediate court martial. 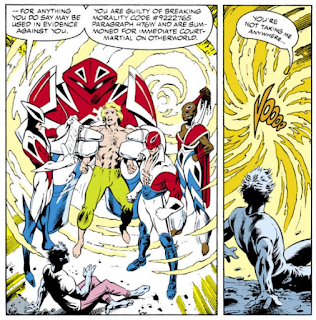 In the offworld subplot department, Kylun meets up with Princess Sat'neen, presumably his world's Saturnyne. 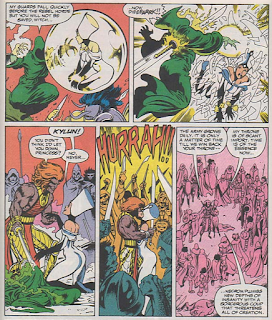 For reasons unknown to me, Marvel published two issues of Excalibur this month, so this one is listed as "Early November" in the indicia.

With Davis back, we get a return of the more comedic cover, with Kitty talking directly to the audience and acknowledging that she's in a comic book.

A Work in Progress
In a nice bit of continuity, Davis draws Kitty wearing her glasses while working around the lighthouse. 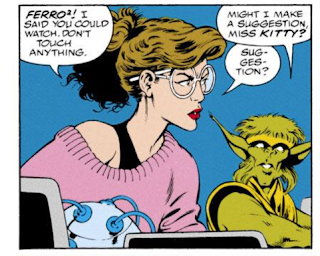 Captain Britain is described via that old comic book chestnut as moving "with a speed that belies his bulk".

Meggan, upon realizing why Captain Britain and Nightcrawler are fighting, rightly asserts that she's not an object to be fought over and won. 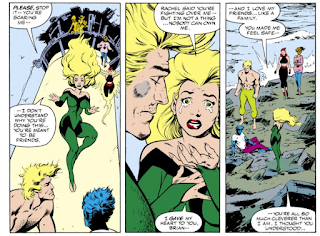 She also reiterates that she doesn't know what her true form is, and that her outward appearance is only a representation of what she thinks Captain Britain likes.

Teebore's Take
The dangling plot thread tie-up tour continues, as Davis uses Technet's new status as co-residents of Excalibur's lighthouse to push the tension between Captain Britain and Nightcrawler over Meggan to the break point, thus finally addressing overtly that long-simmering subplot, with Nightcrawler admitting an attraction to Meggan but insisting he's not in love with her, while Meggan affirms her feelings for Captain Britain while also rightly declaring that she's not an object to be fought over and won, and Captain Britain admits to feeling jealous over Nightcrawler's aptitude for leadership and the way the rest of the team responds to him. The Technet stuff is characteristically whacky, but makes for an effective contrast to the more serious character work being done, and the whole thing is, of course, gorgeously illustrated. Fun stuff.

Next Issue
Tomorrow, we dive into Wolverine's past in Wolverine #48. Next week, the oddly-double-shipped Excalibur #44.