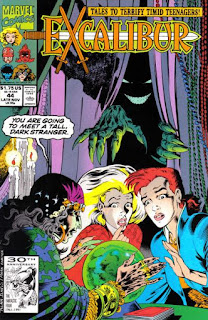 "Witless for the Prosecution"
Late November 1991

In a Nutshell
As Meggan searches for information about her past, Captain Britain is put on trial.

Plot
Captain Britain is brought before a tribunal of the Captain Britain Corps, with Hauptmann Englande prosecuting his case. On Earth, Rachel helps Meggan explore her memories, prompting a recollection of the Scotts, who may have some more information on Meggan's past. Meanwhile, Alistair arrives at the lighthouse, hoping to invite Rachel to join him on a trip, but in her absence, Kitty invites herself along instead. On E'erath, Kylun and Sa'tneen's rebellion continues. Back on Earth, Meggan and Rachel meet with the Scotts, a family which Meggan and Brian befriended early in their superhero career. They direct Meggan to one of the gypsies who took in Meggan as a child, Madame Zelda, who is working as a fortune teller in town. At the lighthouse, Inspector Thomas comes looking for Excalibur's help, but with everyone away, Nightcrawler is forced to consider using Technet in their stead. In London, while Meggan meets with Zelda, Rachel is drawn to an antique shop, where a strange energy being tries to steal a dagger and she runs afoul of FI6 agent Micromax. Meggan then emerges, saying the last Zelda heard of her parents suggested they were in France. On Otherworld, Hauptmann Englande runs down the list of Captain Britain's offenses, Fed up, Captain Britain declares that he refuses to recognize the authority of the court, which prompts the chief magistrate to thereby find him guilty and sentence him to death, to be carried out immediately.

Firsts and Other Notables
Micromax, a size-changing mutant named Scott Wright, appears for the first time this issue. He will appear semi-regularly throughout Alan Davis' run on the series, working with Excalibur, though I don't believe he ever officially joins the team, before fading away into general obscurity outside the occasional guest or background appearance. 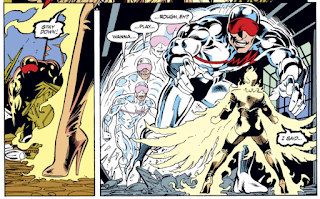 Both Meggan and Captain Britain's histories get essentially recapped this issue. First, Meggan, as she recounts to Rachel the circumstances of her birth. 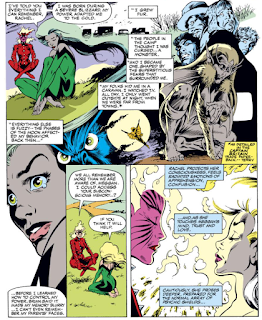 Later, Captain Britain's trial serves as a recap of some of his past adventures and events from this series. 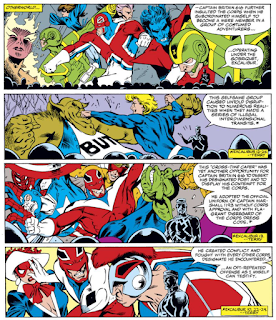 Hauptmann Englande, the Captain Britain of the alternate Nazi reality who fought Excalibur in early issues of the series, returns as Captain Britain's prosecutor. His defense attorney is Captain UK, whom he teamed-up with in issues of his earlier solo series.

The Scott family are the parents of Mickey Scott, the young boy who died in Captain Britain's first adventure, which was also referenced in Excalibur: Possession. 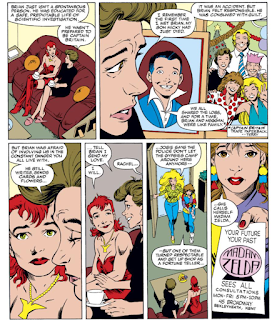 For whatever reason, this is the second issue of this series to ship in September of 1991 (cover dated Early and Late November), giving the series a random one month of bi-weekly shipping.

A Work in Progress
This issue confirms that Captain Britain is on trial for attacking Nightcrawler last issue, a violation of his Earth's morality code. 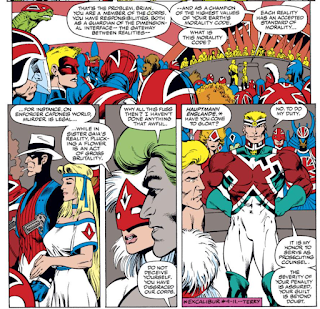 Rachel theorizes that her and Meggan's similar way of handling memories might be responsible for the rapport they share, as we saw off-and-on during "The Cross-Time Caper". Not sure if this is meant to be Davis closing off that dangling thread, or just reminding readers it exists so as to address it again later. 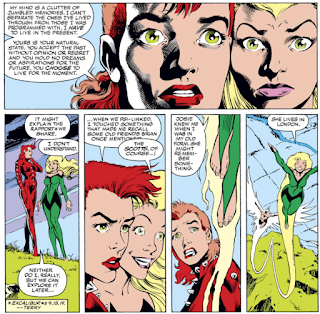 The Earth on which Kylun is leading his rebellion is designated as Earth-148 in this issue.

Upon meeting the Scotts, Rachel wills the Phoenix Force to lie dormant, the first such time she's done that since adopting the power. 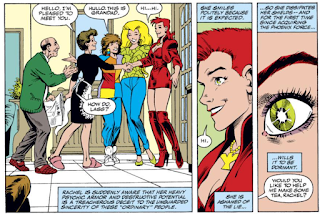 It's noted that Nightcrawler's fur feels like velvet, for what it's worth.

In pointing out Captain Britain's killing of Slaymaster (the villain who took out Psylocke's eyes before she joined the X-Men and had them replaced by Mojo), it's established that the Captain Britain Corp has a clause in their morality code that allows for the revenge/justice killings of people who attacked denizens of Otherworld. 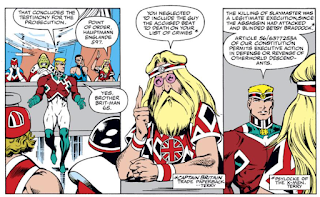 Young Love
Alistair shows up hoping to invite Rachel along with him on a working holiday to Ireland; in her absence, Kitty manages to invite herself along instead. 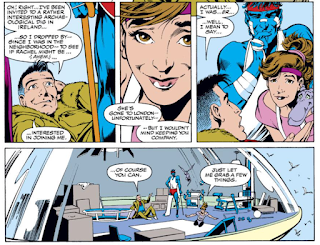 Austin's Analysis
The bulk of this issue (which is pretty much a Classic Claremont Quiet issue, in that it's about a lot of different things and very little of them have anything to do with superheroes fighting super-villains) is an assortment of scenes that further or setup new subplots (like Nightcrawler leading Technet or Kitty's trip to Ireland with Alistair) or characters (Meggan's origin refresher leading to the introduction of Micromax). But the main plot, such as it is, deals with Captain Britain being put on trial for jealousy attacking Nightcrawler last issue. Like the Meggan material, it largely serves as a (well-illustrated) infodump about the character's past for readers who may not have read Cap's previous UK adventures, and for any that have, this is all probably a bit boring.

But as someone who hasn't read much pre-Excalibur Captain Britain, I got a big kick out all the all the Captain Britain Corps shenanigans: the way each captain is judged relative to the moral code of his/her/it's dimension, bringing Hauptmann Englande back as the prosecutor (which immediately clues the reader in that this maybe isn't the most fair tribunal), tying in little bits of Excalibur continuity (like Brian's adoption of a new costume) as evidence, and even addressing past contradictions to what's being presented here (like the death of Slaymaster). It's borderline fan-wanky and a little twee (and I'm not quite sure I entirely buy Brian's hostility towards the tribunal, at least without knowing much about his past dealings with the Corps), and if someone said they didn't like this because it was just a nicely drawn recap, I couldn't argue with them. But this uses continuity smartly, to inform character and move the current story forward, and I rather enjoyed it.

Next Issue
Next week: more about Bishop in Uncanny X-Men #283, a new Brotherhood of Evil Mutants debuts in X-Force #5, and Madrox fights Madroxs in X-Factor #73.