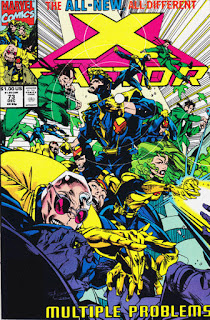 In a Nutshell
X-Factor battles an army of Madrox duplicates.

Plot
X-Factor's press conference explodes into a fight between X-Factor and the Madrox duplicate claiming to be the original, with each Madrox creating additional duplicates with each punch. Once they reach their limit and stop producing dupes, Havok orders everyone to start knocking out Madroxs, in the hopes that when the original falls unconscious, the rest will disappear. Eventually, all the Madroxs are rendered unconscious, but both their teammate and the duplicate claiming to be the real one remain. Elsewhere, Vic Chalker completes his suit of high-tech armor, but realizes he made it too big to operate. Back at X-Factor's headquarters, the team interrogates the two Madrox, but can't determine conclusively who is the original. Havok suggests submitting them to a lie detector, and Val says she happens to know one of the best polygraph experts, who happens to owe her a favor: her ex-husband. Meanwhile, the villain attacking X-Factor, having targeted first Quicksilver and now Madrox, ponders who to turn his ricochet power on next, and settles on Guido.

Firsts and Other Notables
While giving a ranting interview to a reporter (which he later claims he did to distract her), Guido coins the term "Genetically Challenged" or "GeeCees", as a more appropriate term for mutants than "mutants" (which he claims the media has turned into a pejorative). Unlike the creation of the term "flatscan" over in X-Men, this seems mostly just a gag poking fun at the rise of political correctness (which was very much a thing in the early 90s - poking fun at political correctness), and while it resurfaces a few times in this series, it never catches on in any serious way and/or shows up much outside this series. 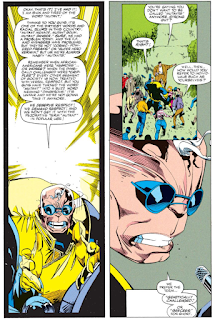 The villain attacking X-Factor behind the scenes call his power his "ricochet ability", which is where the name commonly used to describe him comes from.

A Work in Progress
Madrox theorizes that a mental block is preventing him from absorbing both the duplicate that was killed at the end of issue #71, and the rogue dupe claiming to be the real deal.

Following up from his first appearance last issue, this issue sees Vic Chalker having completed a high-tech suit of armor which he intends to use against mutants. However, upon completion, he realizes he made it too big for him to use, and the idea of the Chalkers being undone by their own mistakes becomes a part of their running subplot. 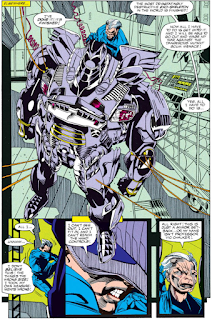 This issue reveals a little about Madrox' motivations for joining X-Factor, saying that after all his time on Muir Island, he grew tired of hiding his head in the sand. 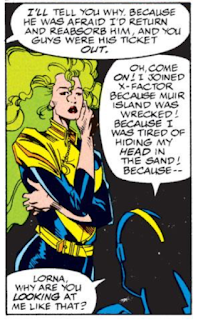 Rahne bemoans being the only mutant team without a telepath (though X-Force technically doesn't have one either, since Cable isn't one yet. 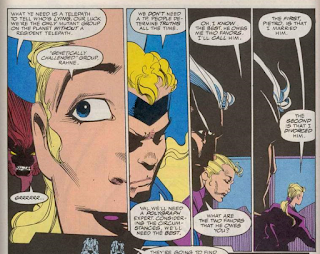 The Reference Section
The issue opens with a commuter listening to his car radio, which announces a song off Weird Al's new all-mutant parody album, "Multiple Man", to the tune of They Might Be Giants' "Particle Man". 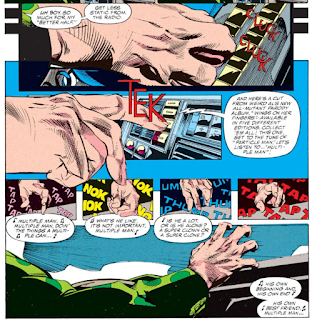 I think that's supposed to be Flavor Flav on the left hand side of the panel.

Spectators discuss sending footage of the fight to Bob Saget, who was the host of America's Funniest Home Videos (aka proto-YouTube) at the time. 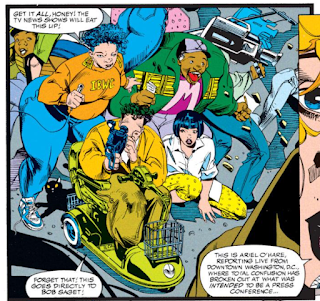 There's a recurring joke in which spectators think Madrox is the Rocketeer (I believe the movie was in theaters around the time this issue was on sale). 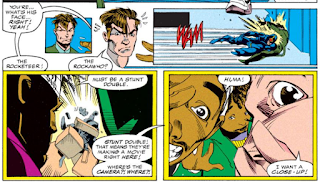 Pun with Peter
X-Factor's Madrox jokes that he's the real deal because his grammar is worse than the Madrox who is claiming to be the real one. 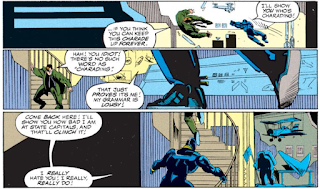 The Awesome and Terrible Power of Cyclops
Lorna tries to get Alex to relax, telling him he doesn't have to be the same kind of leader as his brother, whose face, she says, would crack if ever tried to smile. 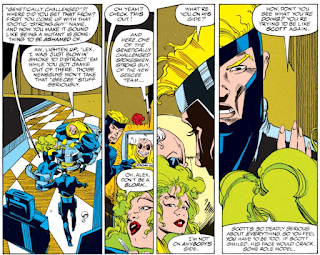 Teebore's Take
While leaving the Madrox mystery/the larger question of who is targeting X-Factor simmering, David and Stroman turn in the most action-orientated issue of the revamped series yet. Of course, all the action involves the team fighting one of its own members (something not lost on the characters themselves), which underscores another difference between this series and its contemporaries: a relative lack of villains. While X-Men deals with Magneto and Uncanny Fitzroy (and classic X-baddies Black Tom & Juggernaut lead into a new Brotherhood of Evil Mutants in X-Force), this series features a shadowy figure attacking the team from behind the scenes, with all of its action, three months in, amounting to an intra-team fight.

The shadowy figure will eventually be revealed, as will his connection to another classic X-villain, and other, more traditional super-villains will appear in this series, but it's clear from the outset that David is less interested in typical hero vs. villain slugfests, and more in exploring what makes the team, as a group and individuals, tick. Which, of course, is another factor for why the series suffered, sales-wise and in terms of popular acclaim, at the time, but also why it's regarded so fondly now, relative to all the 90s-sturm und drang happening in the other titles.