Game of Thrones 6x04: Book of the Stranger 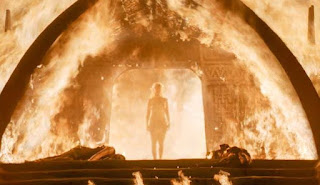 The Wall
Now that Jon Snow has flown the coup...wait, what? He's still at the Wall? That's...kind of confusing. But it's not a bad thing because Sansa shows up and we have an honest to goodness reunion between two Starks! Seriously, that happened. On Game of Thrones!

Meanwhile, Davos finally remembers that one thing he was going to ask Melisandre. He says, "Remember that time I was Hand of the King to that guy, what's his name? Stannis Baratheon? That was crazy, wasn't it? You kind of mentioned he's no more, but what happened there? And, oh yeah, there was that little girl I kind of cared for like she was my own daughter, you know anything about her?" Melisandre is like, "Yeah...about that..." but then they're interrupted by Brienne who's all, "I was there, I saw what happened. Stannis and his army got their ass kicked. Then I killed Stannis myself. I might do the same to this red head here because she's also responsible for my King's death." Then they all go their separate ways lest the weight of all the awkwardness becomes so great it tears a hole in the space/time continuum.

Sansa and Jon Snow do some catching up as I still struggle to believe this is happening on this show. Sansa even apologizes for being so evil. It's crazy! Jon Snow says he'll protect Sansa from now on but isn't sure where they should go. Sansa does and that's to Winterfell to kick some Ramsay ass. Jon Snow says they'll need an army which Jon isn't sure he can get. Then a letter from Ramsay taunting Jon Snow with the fact that Ramsay has Rickon held hostage arrives and Jon Snow is more eager to fight. He's got the Wildling army behind him but he'll need more. I wonder where Jon Snow could find more troops...

The Eyrie
Remember Little Finger? He's still around! And so is Robin. Robin still sucks as much as ever. When Petyr arrives he gifts Robin a rare falcon for...reasons...and the talks of the "news" that Sansa was kidnapped by Ramsay. Petyr then accuses Robin's teacher and guy-generally-in-charge-of-things Yohn Royce of treachery by alerting Ramsay of Sansa's whereabouts.

Yohn obviously objects to being labeled a some sort of traitor. Little Finger demonstrates how Robin is wrapped around his....little finger...and shows how easily he could convince Robin to sentence Yohn to death by moon door. Yohn shits a brick or three but Petyr calls off the dogs, so to speak.

In the end Petyr convinces Robin to assemble an army to save Sansa. Hmmmm...I wonder if there are any other army's aiming to battle Ramsay that they could team up with?

Winterfell
Ramsay kills Osha. She tried to use her womanly ways to seduce and kill Ramsay but to no avail. I, obviously, wanted her to succeed but I knew better. Game of Thrones is only nihilistic about things that'll piss the viewer off. So, really, Game of Thrones is more pessimistic than nihilistic but, whatever. It's what the people want!

Meereen
The slave masters are arriving for negotiations. Grey Worm and Missandei aren't on board with this "talking to them" plan. Tyrion assures the two that diplomacy is the best solution. You know what else Tyrion thinks is a good solution? Letting one of the greatest injustices against human beings continue for seven more years. That's his plan, to allow the slave masters to use slaves for seven more years. Grey Worm and Missandei are NOT happy.

However, Grey Worm and Missandei do understand a little about politics. They defend Tyrion and his discussions with the slave masters to the public. In private, however, they warn Tyrion that he may think he's playing the slave masters but he's the one likely being played. I'm....not so sure?

Pyke
Theon shows up and Yara is stilled pissed he didn't let himself be saved and she's also worried he'll throw a wrench in her plans to become queen. Theon says he has no desire to be king and wants her to become the ruler. That's all.

King's Landing
Margaery is brought before the High Sparrow as he regales her with the story of his conversion. He was once a man obsessed with possessions and status but learned the futility of it all and blah, blah, blah. We know this story. I was afraid Margaery was falling for it but after Margaery gets to see her brother she tells him to stay strong and not fall into the Sparrows' trap. So she still seems cool. But Loras is ready for it all to end regardless of the price. I'm afraid Margaery will submit to the High Sparrow's punishments just for her brother's sake.

Tommen meets with Cersei and says he needs to tell her something the High Sparrow told him. We don't know what was said specifically but Cersei and Jaime confront Olenna and Kevan and tells them that Margaery will have to do the walk of shame...er...atonement. Cersei thinks that the Tyrells should attack the Sparrows during Margaery's walk so they could take down the Sparrows where Margaery is in public and safe. But...I don't trust the Lannisters.

Vaes Dothrak
Jorah and Daario are hot on the trail of Daenerys and have what I believe is supposed to be witty, playful banter but it just seems mean spirited to me. They end up in Vaes Dothrak and, shockingly, their stealth mission it ends in violence. They cover their tracks and end up finding Daenerys but she tells them that this isn't her first rodeo. She's got this shit.

So the Khal's all gather in a hut with Daenerys to discuss her fate. Daenerys is defiant so naturally this results in the Khal's discussing various way Daenerys is going to be raped. I was about to ding the Dothraki for this is but, really, what people in Game of Thrones don't threaten rape regularly?

Anyway, no scale in the world goes high enough to measure how over all this Daenerys is. So she tips over a brazier. Next time the Khal's build a wooden hut I'd recommend they don't coat the floors in kerosene oil because that fire spreads QUICKLY! A young Khal wife Daenerys had recruited bars the hut doors and the Khal's are left with no other option but to spend their remaining few minutes of life thinking about how they got bested by a girl!

The fire blazing from the Khal's hut garners the attention of the Vaes Dothrak residents. From the burning hut emerges a nude, unburnt Daenerys. Like many other citizens before, the Vaes Dothrak citizens end up bowing before her. So do Jorah and Daario. Although, Jorah is the only one who can't keep from staring at the naked Daenerys which I'd make fun of him for but my house has way too much glass to start throwing those particular stones.

Other Thoughts
I feel like the last time Daenerys emerged from a fire nude and unharmed the Dothraki were less than impressed. But I suppose the Khal's weren't all murdered that time..

At least Edd brought up that perhaps Jon Snow still should help with the White Walker problem.

I was surprised by the hugging and joy on Jon Snow's and Sansa's faces. This is Game of Thrones. I expected slight, curt nods.

So are we really, truly sure that Brienne killed Stannis for realsies?

It's interesting that Osha has been killed so unceremoniously. I had just read an article about how much he liked what the show did with Osha and wished he had done more of the same in the book.

I think Pyke is becoming the new Dorne.

I think my biggest issue with the Sparrow story line is I have no idea what they believe in or what they are truly trying to accomplish. I mean, I get their beliefs are vaguely, generic Christian but how much of that is just me bringing the real world into this story? How about you clarify what this religion is, what they believe, why they believe it and what the goal of the Sparrows are.

Ramsay: Does that worry you at all?.
Osha: You eat them after?
Ramsay: No.
Osha: Then I've seen worse.