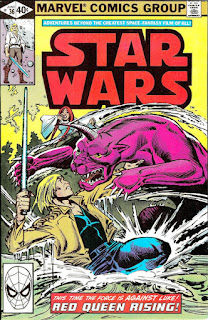 In a Nutshell
Luke is manipulated by Domina into a duel with Darth Vader.

Plot
In orbit around Monastery, the Millennium Falcon is captured by Darth Vader's Star Destroyer. Hiding Leia in one of the smuggling compartments, Han attempts to pass himself off as a legitimate spacer, but Captain Wermis knows him and his ship, and imprisons Han and Chewie. On the planet below, Luke rescues Domina from an attacking jungle cat, only to learn the creature was actually her docile pet, weakening him in the eyes of the watching elders, which was Domina and Darth Vader's (who goaded the creature into attacking) plan all along. In orbit, Leia climbs out of the hidden secondary compartment, telling Threepio to warn Luke, via Artoo, about Vader's apparent schemes. Just then, Domina arrives to take Luke to plead his case for the Rebellion before the elders. However, when he enters the chamber, he discovers that Domina has maneuvered to be named the All-High Priestess, who declares he and the Rebellion are threats to the natural cycle of galactic life. When he argues that Vader is influencing Domina in order to turn her order against the Rebellion, Vader challenges him to a duel, which Domina condones. Meanwhile, Leia manages to free Han and Chewbacca and arrange for the escape of the Falcon, but as they race away from the Star Destroyer, a revived Baron Tagge appears, leveling a blaster and ordering them to take him to the planet's surface.

Firsts and Other Notables
Teased last issue, this one sees the return of Baron Tagge, as he awakens from the stasis Vader placed him in aboard Vader's Star Destroyer. 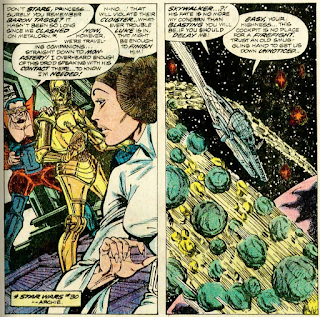 A Work in Progress
This issue suggests that Darth Vader has been training Domina, though it's unclear in what, exactly (and whether Domina is Force sensitive). 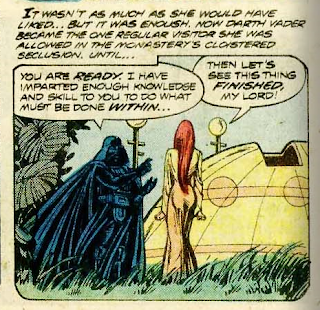 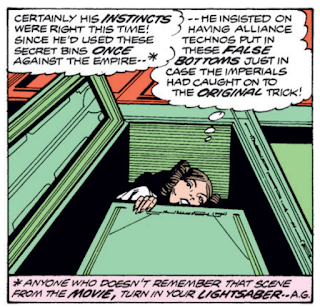 Austin's Analysis
A pretty standard "moving the players into position for the climax next issue" middle chapter of a three part story, this issue shines on the strength of its two female characters, Leia and Domina. The former gets a chance to rescue Han and Chewbacca from an Imperial prison, a deliberate reversal of their first encounter in A New Hope (and one which highlights Leia's skills, as she does markedly better in her attempt than the boys did in theirs), while latter shows she is no shrinking violet, and that while Vader may think he's the dominant partner in his alliance with Domina, the Tagge sister has an agenda of her own. Willing to ally with her brother's enemy to get revenge on his (alleged) killer, but not letting that get in the way of her settling her brother's score on his behalf, all the while seemingly maintaining a legitimate devotion to the religious order to which she's been consigned, Domina, in her short amount of time, has already become far and away the most interesting and complex member of the Tagge family.