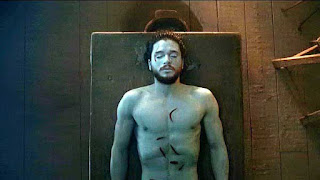 Way the Hell Up North
Remember Bran? He was certainly a character at one point. But he's back! And he's having dream visions.

Bran is seeing Winterfell in the past. It's the far enough in the past that we're denied a Sean Bean cameo. Instead we see a very young Eddard Stark and his brother Benjen sparring with each other. Ned's sister Lyanna and a talking Hodor (real name Wylis, apparently) make appearances too!

After the vision Bran meets with Meera who is all sad that her brother died in a fiery blaze of agony and death. Meera doesn't know what to do with herself but is told that Bran will need her help. So, yeah, woman, stop moping about your brother. You've got a man to tend to!

King's Landing
Some intoxicated dude is drunkenly bragging about waggling his dick at Cersei during her walk of shame. You can almost hear the “cacacaca” and “chachachacha” when the man walks down a dark, empty alley to pee. Jason...er...Zombie Mountain shows up behind the man and crushes his skull. I guess insulting Cersei in King's Landing is the equivalent to sex, drugs and booze at Crystal Lake.

Cersei, meanwhile, is confined to the Red Keep and can't go to Myrcella's funeral. Tommen thinks her leaving is too dangerous because he's can't keep the Sparrows in check because he has no fucking clue how to be a King. Or maybe he just wants Cersei away from Myrcella's funeral because Jaime is already there and Tommen knows what happens when his parents get together in front of their children's corpses.

At Myrcella's funeral (with those creepy stone eyes) Jaime is mourning. The High Sparrow shows up and Jaime is all “IT'S ON!” but, just as Jaime is about to skewer the High Sparrow, other Sparrows show up and surround the two because the Sparrows are made up of the poor and unfortunate and the poor unfortunate outnumber the rich and affluent. So Jaime must stand down.

Meereen
Things suck in Meereen. With Daenerys gone the other cities she freed, Astapor and Yunkai, have been retaken. Tyrion decides that their only hope are the dragons. He knows that dragons need to be free to be strong. So Tyrion frees the two remaining dragons while avoiding becoming dragon-food. Good for Tyrion!

Braavos
Arya still sucks at blind staff fighting. After getting schooled by the woman from the House of Black and White Jaqen shows up. (Or, whoever it is. This whole faces thing makes identifying people confusing.) Jaqen offers Arya food, lodging and her sight all in exchange for saying her name. Arya doesn't and Jaqen is like, “You just passed this very, very obvious test. Come with me.”

Winterfell
News of the hunters' failure to capture Sansa and company reaches Ramsay and Roose. Ramsay wants to march to the Wall and kill Sansa and Jon Snow because war and death are the only things that make Ramsay happy. Also, he thinks if he eliminates all Stark lineage he'll have enough support to hold the North.

Roose Bolton then gets the good news that his child has been born. It's a boy! Ramsay pretends to be happy about this but then predictably commits patricide. This is what happens when you raise a sociopath, Roose. It's hard to imagine a scenario in which Ramsay wouldn't have done this to Roose eventually.

Ramsay then meets with his adoptive mother and gets to hold his half-brother. I half expected Ramsay to just throw the baby on the ground but this show is much classier than that. Instead Ramsay  feeds his adoptive mother and her newborn child to his dogs as she pleas for her life. I'm reminded that the second most popular show on television right now routinely has things like women being raped, children being murdered, incestuous sex during the funeral of the siblings child, etc. I'm not sure what that says about us but it's sure saying something!

The Iron Islands
The Iron Islands are as gloomy and unwelcoming as ever. I mean seriously, it's like someone saw an always storming Luke Skywalker's island, stuck their flag in it, and said "I want to live here!" Who would do that!?

Sorry. Anyway, things aren't going well for Balon Greyjoy. He has lost his last costal castle and he's still pissed Yara tried to save her brother. Then he decides to take a leisurely stroll down one of the rickety, unstable bridges that litter the Iron Islands during a thunderstorm. He meets the man who I believe is his brother and gets tossed off the bridge. Didn't see that coming!

Miraculously, the Iron Born find where the body of Balon washed up on shore. Yara thinks she's in line to become the new ruler but apparently a ceremony will take place that will declare who the new ruler will be. It could be Yara but this is the world of Game of Thrones and sexism is always on the menu. In fact, it's their most popular dish!

The Wall
Davos and the men loyal to Jon Snow are in a bit of a bind. The Night's Watch is trying to bust down the door to the room they're in and kill them all. Just when it looks like they'll go down swinging, Edd and a Wildling Army show up and start kicking ass! They take down the Night's Watch and I'm kind of happy but I'm also reminded how the Wildlings slaughtered innocents. It's Game of Thrones, no one is truly likeable.

After that business is taken care of, Davos pleads with a mopey Melisandre to try and save Jon Snow's life. She says she's seen someone bring the dead back to life but she doesn't think she can despite the fact that she's birthed smoke monsters and the like. Davos just wants her to try and Melisandre agrees because why not? What's the worst that could happen, Jon Snow stays dead?

The ceremony is performed. It doesn't work. Everyone leaves the room. But wait, guess what? It actually did work! Jon Snow is alive! Who could have seen that coming!

Other Thoughts
Well, Ser Alliser was afraid that the Wildlings would be the death of them all...

The dude bragging about showing his wang to Cersei, I think we actually saw him during the walk of shame last season?

Wang Dude was pretty drunk. I wonder if drinking is allowed in the High Sparrow's King Landing?

At first I thought Jaime could take out the High Sparrow and his minions. Then I remembered he's missing a hand. How soon we forget!

I kind of want Tommen to just order the death of all Sparrows.

Tyrion's instincts with how to handle dragons almost seem...innate!?

The dragon's fire CGI was less impressive than most special effects on Game of Thrones.

I was a little confused, initially, if Roose was killing Ramsay or vice versa. Perhaps that was intentional?

Are we positive the Hound is dead?

Seriously, the Iron Born need to look at upgrading the bridges on the Iron Islands.

Tyrion: Dragons do not do well in captivity.
Missandei: How do you know this?
Tyrion: That's what I do. I drink and I know things.

Melisandre: Everything I believed, the great victory I saw in the flames, all of it was a lie. You were right all along. The lord never spoke to me.
Davos: Fuck him, then. Fuck all of them.

Season 5 Totals
Boob Count: 2. No nudity at all in this episode, I think?
Full Frontal Count: 2
Butt Count: 2
Coitus Count: 0
Main Character Death Count: 5 (Roose Bolton and wife Walda.)
Hodor Count: 4 (Do I count other people saying Hodor? Is so, the count would be 8...)
Newer Post Older Post Home
Posted by Dr. Bitz at 6:17 PM