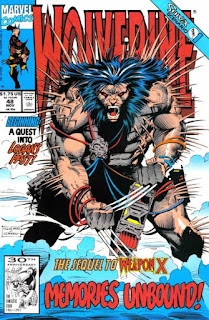 In a Nutshell
Unknowingly exploring the old Weapon X base, Wolverine is bombarded by memories.

Plot
Wolverine and Jubilee are led to an abandoned nuclear facility in Canada, one which seems familiar to Wolverine. Exploring further, they discover an old car with a medicine bag attached to the key ring; this triggers a memory of Wolverine being abducted from that car by agents of the Weapon X project. Going deeper into the facility and spotting claw marks on the walls and doors, he flashes back to the simulation in which he attacked Weapon X soldiers, hunting for the Professor. When Jubilee presents him with a small handgun she found in the glove box of his car, he remembers a mission he ran with Sabretooth and Mastodon on his birthday, in which they attacked a gang of revolutionaries that included Silver Fox. In the memory, Wolverine transforms into a spiky version of his post-Weapon X self, and takes the medicine bag from his keychain off Silver Fox's neck. Waking up, he tells Jubilee they're returning to the X-mansion, as he needs Xavier's help sorting through his memories, and the pair leave without noticing the large man-shaped mold labeled "Shiva".

Firsts and Other Notables
Billed on the cover as a sequel to the "Weapon X" story which ran in Marvel Comics Presents (it completed about two months before this issue went on sale), this issue kicks of a story that represents the first concerted effort to explore Wolverine's past done in this series. The covers of this issue and the next refer to the story as "The Shiva Scenario", while the interior story titles are all "Dreams of Gore: Phase One, Two and Three".

Jubilee, last seen in X-Factor #70 getting some upsetting news from Wolverine (or in Wolverine #46, depending on the order in which you read them) and thus far completely absent from either of the two X-Men books, appears here, accompanying Wolverine with no mention made of their conversation in X-Factor. 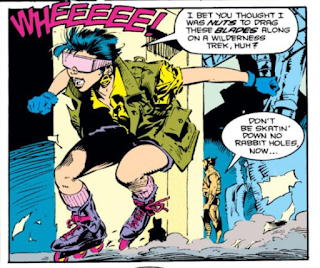 Fellow Weapon X/Team X members Mastodon, John Wraith and Maverick all retroactively appear for the first time in this issue, though only Mastodon is mentioned by name (and his appearance, which occurs in a false memory, is inaccurate). The latter two "Morse" and "Carlisle", the mercenaries working with Silver Fox, as later issues will reveal that Weapon X, in part, play-acted the false memories. The Professor, from "Weapon X", is also part of Silver Fox's gang in that memory. 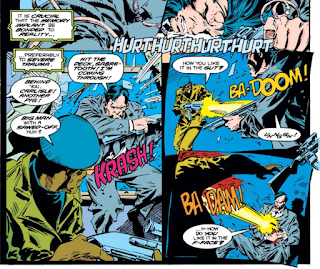 Mentioned for the first time but not seen (outside of large piece of machinery with its name on it) is Shiva, from which the story gets its cover title, a robotic program designed to protect the secrets of Weapon X. 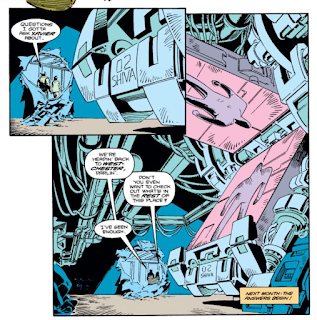 Harry Tabeshaw, a minor recurring character in this series, appears for the first time this issue. It's revealed that he helped Ronald Parvenue track and capture Hunter in the Darkness prior to issue #45.

One of the flashbacks in this issue features narration from unidentified individuals discussing the importance of tying false memory implants to instances of pain, as the mind is less likely to remember specific details of events while dealing with pain. These false memories thus come to be known as the "painscape", and are usually visually represented by the presence of thorns/spikes in the scene.

A Work in Progress
The scene in which a pre-adamantium Wolverine is captured by agents of the Professor, as seen in "Weapon X", is revisited here. 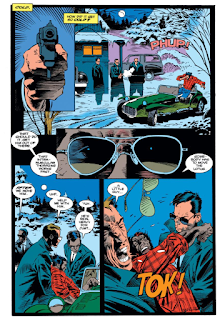 Similarly, the scene in which a post-adamantium feral Wolverine attempts to hunt down the Professor is recreated, though as that scene as presented in "Weapon X" was of a simulation, the scene as presented here also contains the spiky thorns that indicate it is tied to an implanted memory. 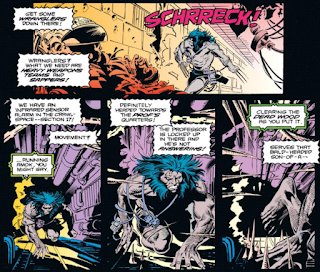 Teased in issue #46, this issue shows Wolverine and Sabretooth as partners, in action on Wolverine's birthday against some revolutionaries, including Silver Fox, though once again, this seems to be taking place in the thorny "painscape". 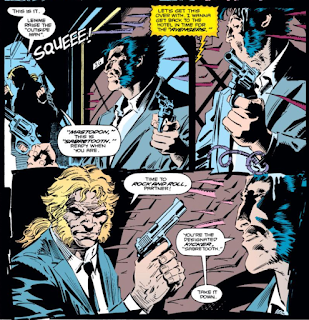 The Grim 'n' Gritty 90s
It's not quite as egregious as the ubiquitous belts and pouches, but for whatever reason, Wolverine is wearing some kind of utility vest over his uniform throughout this issue. 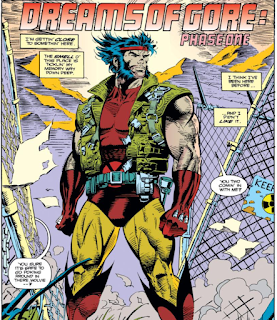 Jubilee spends much of this issue on rollerblades.

Austin's Analysis
This issue kicks off the first legitimate deep dive into Wolverine' past that this series has ever done. I know that the end result isn't generally regarded very favorably, as memory implants get layered upon memory implants, with nobody wanting to commit to anything concrete about the character, with his overall mystique getting watered down as a result. But I've always been less bothered by all that than many fans, in large part probably because the only Wolverine I've ever known is the one who was part of Weapon X and had a past with Sabretooth and Maverick and Silver Fox, and constantly struggles with determining which of his memories are real and false. That was the status quo in place for the character when I first started reading comics (albeit just barely, as I've come to realize; we're just about a half a year away, publication-wise, from my first issue at this point), so it's really all I've ever known. And I'm also one of those anal-retentive people who wants everything explained, who wants to know all the details, however mundane, of a character's past, even if that doesn't always make for a good story (this may also be part of why the Star Wars prequels have never bothered me as much as everybody else). Plus, if Wolverine's past was going to be explored (and, given his popularity, Marvel would have been commercially stupid NOT to explore it, at some point), it makes sense for that to happen here, in his solo book. Frankly, it's rather astonishing it took forty-eight issues to get here.

Now, all that said, I've only ever read ABOUT these stories, not the stories themselves (we're still much farther away from when I became a regular reader of this book), so I'm encountering them now for the first time. It's one thing to know about a story, and quite another to experience it. A convoluted past and false memories may be my personal status quo for Wolverine, but if the stories that establish that are bad, they're still bad stories. So it remains to be seen how the execution of all this works, regardless of whether or not the overall idea established by the stories is good or bad. I like the idea of learning more about Wolverine's past, and the whole "brainwashed and implanted with false memories" is one of those genre tropes I tend to personally like more than dislike, but it remains to be seen if these issues, on an individual story level, are any good.

This issue is itself is...fine. It's mostly just Wolverine wandering around the old Weapon X facility (him not knowing that's what it is) and having flashbacks to "Weapon X" and other events of dubious accuracy. Jubilee's presence is appreciated, taking some of the starch out of the otherwise grimdark material, and while Silvestri is no Barry Windsor Smith, he does an effective enough job at evoking some of the visual elements of "Weapon X" (I'm less certain what Wolverine's utility vest and headband add to the proceedings). As a first chapter, there's enough of a hook (I honestly don't know what elements of these memories are real or false, though I suspect they're all mostly false), and I was genuinely surprised when the issue ends with Wolverine and Jubilee heading back to the X-Mansion (I kinda assumed the whole story was going to unfold at this facility). This is all mostly setups, teases and flashbacks of questionable accuracy, but for a first chapter, that's good enough.

Next Issue
Next week, I take a break in anticipation of MSP ComicCon, and only review the curiously double-shipped Excalibur #44.