Season Three was undeniably a good season; perhaps even a contender with the legendary opening year.  Season Four…is Okay TV for the most part, but the drop in quality is noticeable.  Some of the storylines are recycled from previous episodes (sometimes within the same season; notice that the beginning and end of the season both involve detectives reluctantly taking undercover assignments), and the number of recycled actors is also hard to forgive.


The most glaring example is actor Reni Santoni who first appeared as a veteran investigator in Season Two, jealously protecting the Webster serial killer case against Bobby Simone.  He shows up this year in "Caulkmanship" as a neighborhood dope who accidentally killed a man and eventually confesses to it.  Recycling minor roles, in terms of Thug #2 or Drug Addict on the Floor #7, would be perfectly understandable, but giving an actor with a memorable face a prominent role as a fellow detective one year and then bringing him back as a suspect a little over a year later feels wrong.  Also, are we supposed to be memorizing the bit players from these cases or not?  Sometimes they do return, such as Holly, the timid abused woman that Sipowicz tries to help in Seasons Two and Three.  If they expect us to recognize Holly, won’t we recognize the detective that tried to screw Bobby out of a case in Season Two?  Or the Private Investigator that was conning a grieving family out of cash in Season One, who also appears this year as a suspect?

The most disappointing aspect of Season Four is the formula that develops -- Simone and Sipowicz work the main case, which is always a murder, Martinez and Medavoy handle the B-plot, which is always less serious (even if it is a murder instead of a robbery, there’s some humorous angle attached to it), and now there’s a C-plot, usually handled by the two female detectives.  As many viewers noted, the cases handled by the female detectives often require “a woman’s touch,” meaning the case involves a baby or someone being molested in some way. 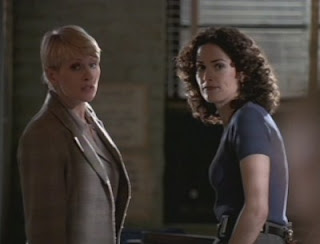 Not every episode abides by the formula, but at no point this year do we see a real variation on a detectives’ daily duties (such as having to testify in court), and the show is also rigid about presenting practically all cases from the very beginning.  I’m not sure if this was a network note or not, but it’s irritating to have your hand held during every step of an investigation when the first season gave you credit for being able to figure most of this stuff out on your own.

Season Four certainly has some standout episodes, though.

Season Highlights
To steal an old line from the commercials, if you watch only one episode this season, it has to be “Taillight’s Last Gleaming.”  Not only is it one of the best showcases for the underused Lt. Fancy character, but it’s one of the finest Sipowicz episodes of the show’s entire run.  It’s also a stunning example of the show boldly breaking the standard NYPD Blue format while remaining true to its core.  “Taillight’s Last Gleaming” is the first time the show ever breaks from the faux-documentary style and presents a dream sequence, opening with a shocking vignette set in a diner that has Sipowicz looking past the patron next to him and realizing that his deceased son is sitting on the other side of the counter.  Sipowicz asks the trucker sitting next him to swap seats so that he can sit next to his boy, a brief exchange that we learn has much deeper implications by the episode’s end.

Sipowicz tries to have a conversation with Andy, Jr. but they end up stepping on each other’s toes before Sipowicz abruptly awakes.  Sipowicz keeps dreaming about his son, but their conversations never seem to get any better.  I won’t spoil the rest of the episode, but it’s a classic script by the late David Mills that eradicates the stale formula the show occasionally falls into while also providing excellent character work for Dennis Franz.  The fact that the episode even made it to air is surprising -- Blue is a show so committed to the documentary style that you don’t even see both sides of a phone conversation (a rule that’s briefly broken in Season Five’s premiere, when the leads Simone and Sipowicz are on the phone together.)  Now, not only are they cutting to another location, they’re cutting to Sipowicz’s tortured dreams.  It easily could’ve been a disaster, but the episode is executed so well I have to forgive it for abandoning the basic rules.

Other fine episodes this year include “Upstairs, Downstairs,” which examines rivalries between uniform cops and detectives, “Yes, We Have No Cannolis,” an early attempt to break format without breaking the standard rules of the show, “Where’s Swaldo?,” which perhaps has Dennis Franz’s greatest monologue as Sipowicz (maybe even the finest monologue Milch has ever crafted), and “Ted and Carey’s Bogus Adventure,” which is possibly the last time Sylvia Costas makes a significant contribution to an episode.

Season Four just might trump Season Three when it comes to a misguided, never-ending subplot that everyone hates, however.

What was the Point of THAT?
There are a few candidates for the title of “Most Pointless Ongoing Subplot,” a category that includes “Simone Inherits an Apartment Building” (which produces one tolerable story arc and is then forgotten), “Sipowicz Takes Extra Work So that Sylvia Can Care for the Baby” (dropped after one episode), and “Martinez Runs for Union Delegate” (a plot Milch discussed with the press while promoting this season, then eventually forgot).  Nothing’s going to top “Greg Medavoy Twists Himself into Knots After Being Asked to Father a Lesbian Couple’s Child,” however.

Looking back, I can almost see what the producers were going for.  Medavoy as a character is defined by two traits:  1) His relentless anxiety issues and 2) the fact that he views himself as a family man, yet is always separated from his family.  Having Medavoy develop a crush on a female officer, learn she’s gay, progress into a friendship with her, then decide to father her child only to discover later that he’s not truly a part of their family…yes, that could be a legitimate Medavoy story.  What we get instead is Greg continually making a fool of himself, a couple that chooses Medavoy as the father of their child even though any sperm bank surely has a million more qualified candidates, and far too many sequences of Medavoy talking about his, ahem, “specimens.”

Alan Sepinwall, an established TV critic who entered the field because he loved NYPD Blue so much as a college student, so hated this storyline that he publicly announced he was abandoning his weekly reviews and possibly giving up on the series altogether.  It’s truly that irritating; I’m not surprised the producers made another attempt to introduce a lesbian cop (played by Paige Turco -- yes, April O’Neil from the Ninja Turtles movies) after the botched Lesniak storyline from the previous year, but what a horrid story for everyone involved.

Sipowicz Says
“Get her a lawyer. We don't do that often enough.”  Sipowicz’s response when he's asked to help Geri the PAA give a statement that could enable her to avoid jail in“Tom and Geri.”  One of the few meta-jokes the show ever indulged in. 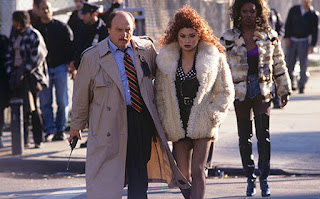 I Love the ‘90s
Blue usually avoids pop culture references, likely because Milch was already in middle age when the show was created, but this season has possibly aged worse than any other.  The main culprit is the OJ trial, which had already concluded when this season began, but remained in the public’s consciousness.  OJ’s referenced in almost every episode during one stretch of the season.  The other culprit is Bobby’s Jerry Maguire-themed proposal to Diane, which is just painful to watch now.

Next Time: I really should get to Brooklyn South, the failed attempt to (kinda) spin the show off on CBS.  Or I might go back to more Hill Street Blues.  Or resolve the cliffhanger from this year and move on to Blue Season Five.
Newer Post Older Post Home
Posted by G. Kendall at 6:30 PM