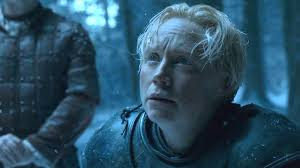 Winterfell
Ramsay Bolton is acting all sad over the death of Myranda. It's an act. Hell, maybe he's trying to fool himself? Regardless, he's a sociopath so he's incapable of feeling sadness. To emphasize this fact he wants Myranda's body to be fed to the dogs.

Roose Bolton reminds Ramsay that their hold over the North is tentative and can only be solidified with a Stark. Unfortunately for Ramsay, he is now Stark-less. Roose then reminds Ramsay of Roose's unborn baby and how, if it is a boy, Ramsay is replaceable. If Roose actually loved his unborn baby he certainly wouldn't taunt Ramsay with it. That's a recipe for disaster. So either Roose is stupid or uncaring. My vote is for both!

Meanwhile, Theon and Sansa did indeed survive their jump from the castle walls. I know we were all worried! They are on the run from some hunters and their dogs. Theon wants to go through a river but Sansa is more apprehensive.

I know Sansa has been a bit of a whiner on occasion in this series but I'm with her! It looks cold out there and that water looks freezing. Walking through it is a very real danger.

But they don't die even after leaving the river. Walking in the cold in wet clothes is a recipe for hypothermia. They don't even get a fire going! It's not a big deal, though, because they're soon found. Luckily, Brienne shows up to kick some ass! Podrick is there too and he gets to penetrate one person. With his sword, of course.

Anyway, Brienne pledges allegiance to Sansa Stark. Sansa accepts and now Brienne, Sansa, Theon and Podrick are all together. Yay for characters coming together!

Dorne
Shit's going down in Dorne! News of Mycella Lannister's death reaches Doran Martell via a letter. Then, news of Doran Martell's death reaches Doran via Ellaria's knife. All Doran's guards do is watch, because everyone apparently hates him. Doran's son Trystane also is killed in what could have been a cool battle but wasn't. He just got stabbed from behind by Obara.

Also, as expected, the Sparrows keep on Sparrowing. They're keeping Margaery locked up and want her to confess to her sins. She doesn't. She asks the High Sparrow if he would give her information on her brother Loras. He doesn't.

Meereen
Tyrion and Varys walk around talking about typical Tyrion and Varys things. There's not much going on because Daenerys is missing so the Sons of the Harpy have nothing to do. They do set fire to Meereen's fleet though. (Well, presumably it was them.)

Speaking of a missing Daenerys, Daario and Jorah are hot on her trail. Well, especially Jorah. He gets hot just thinking of Daenerys. Frankly, I wouldn't doubt that Daario does too. Let's just say there's a lot of hotness going around.

Anyway, where was I? Oh yeah, Daario and Jorah find the bread crumb in the form of a ring Daenerys left behind. Daario is off to follow the trail while Jorah stays behind for a second to roll up his sleeve and show his greyscale infection to no one in particular.

The missing queen herself is being held captive by a Dothraki clan. They say mean things about her in their language unaware that she knows exactly what they're saying. Apparently what happened to Kraznys isn't common knowledge.

The leader of this Dothraki clan is Khal Moro. Naturally, he wants to rape Daenerys but she bursts his bubble by announcing that she was the wife to Khal Drogo. The good news for Daenerys is she avoids sexual abuse, the bad news is that she is now to be shipped off to Spinster City for the rest of her life.

Braavos
Arya's blind. The woman from the House of Black of White plays the part of Stick and starts beating Arya with a...stick. The beat down eventually stops but the woman vows to be back.

The Wall
Jon Snow is dead. I mean, probably not for long, but for now he's still dead. Davos comes across his dead body and realizes things are not well at the Wall.

Ser Alliser (who freely admits to murdering Jon Snow) and the rest of the Night's Watch are trying to get Davos and company out of the store room to presumably kill them. Davos can only hope for a miracle (probably performed by Melisandre) which, in the real world, would probably amount to jack squat. But when you're in a world of magic then miracles can and do happen.

We end with checking on Melisandre, the most likely candidate to perform said miracle. She's retiring for the night, takes off her necklace and guess what!?! She's an older woman in the guise of a young woman!!!!! Which means............something?

Other Thoughts
For an end of the episode hook, this one was pretty weak. I can't remember if Melisandre ever alluded to be older than she appears before but it's not surprising. If she is very old or the age she appears, it doesn't change her character as a mysterious witch. Her appearance being an illusion doesn't reveal anything more about her character. She's still just a magical woman. I mean, if she was secretly a white walker or a dragon then that would be something!

What's Jorah's end game? Does he hope to be cured of grayscale or is he just hoping to save Daenerys before dying?

I think Brienne should be referred to as "The Bloody Woman" from now on.

Does every ship come with a few caskets just in case?

Even without reading the books, anytime something feels off I have to resist the temptation to blame it on the lack of source material. The Tyrion and Varys dialogue felt off this episode (especially the oddly childish and very unclever "cock" line by Tyrion). However, their dialogue was better last season even though, I believe, Tyrion and Varys haven't even met in Meereen in the books. Maybe I'm wrong on that, though?

Anybody excited by the fact that with Daenerys kidnapped and the Meereen fleet burnt, Daenerys' return to Westeros is delayed indefinitely?

This episode was a bit lackluster, especially for a season opener. This really felt like an extended "last time on Game of Thrones." Most scenes were about reminding the audience what was going on. Except for Dorne, I suppose. But nobody cares about Dorne.

Varys: I used to steal from people like you when I was a boy.
Tyrion: It's a good thing you're not a boy anymore.........because you have no cock.

Edd: If you were planning to see tomorrow, you picked the wrong room.