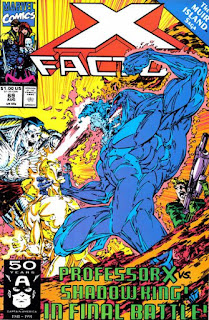 In a Nutshell
X-Factor joins the fight against the Shadow King.

Plot
In the wake of angry, hate-filled riots breaking out all over the world, Val Cooper calls X-Factor to the White House on behalf of the President, where they are reunited with Professor Xavier. On Muir Island, Forge frees Banshee from the Shadow King's control, and he tells Forge, Wolverine and Rogue that the Shadow King is using Polaris as a nexus between the real world and the astral plane, her ability to absorb negative emotion empowering him, which he then uses to fan the flames of hatred in the world. Meanwhile, X-Factor and Professor X, at the head of an international task force including Val Cooper and FBI agent Jacob Reisz, are approaching Muir Island via submarine. They plan to send X-Factor to the island, using Jean's telepathy to mask their presence, and disrupt whatever nexus the Shadow King is using. 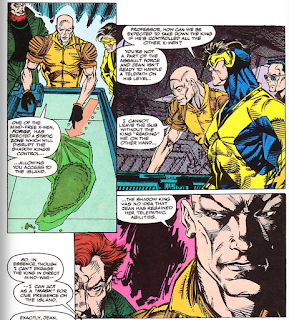 After landing on the island, they are attacked by a group of possessed X-Men, while the Shadow King, in the body of Reisz, attacks Xavier on the sub. Xavier calls to Val for help, but Reisz says she is his thrall. However, Val suddenly changes, morphing into Mystique, and blasts Reisz, destroying the Shadow King's physical host. On the island, X-Factor discovers the nexus is Polaris, but just then, the free X-Men arrive, saying if they disrupt Polaris they'll kill her. But before they can figure out an alternate plan, the Shadow King takes a new host: Xavier's son, Legion. He tells the X-Men both they and their dream are dead, then triggers a massive explosion.

Firsts and Other Notables
Though issue #71 marks the beginning of the new iteration of X-Factor, for all intents and purposes, this is the last issue of the series to feature its original characters; next issue, written by new regular series writer Peter David, serves as an epilogue to the "Muir Island Saga" and while X-Factor appears in it, it's really a jam issue closing out the story and setting up the next iteration of the series.

This is also Whilce Portacio's last issue as the series' artist, ending his short run that began in issue #63; he moves from this book to Uncanny X-Men with issue #281, which, in Claremont's absence, he also begins plotting.

Even though last issue seemed to suggest that Jean's telepathy wasn't fully restored, here she is back to having full telepathic abilities without comment, and this time they'll stick around, another bit of table setting for the upcoming "back to basics" relaunch. 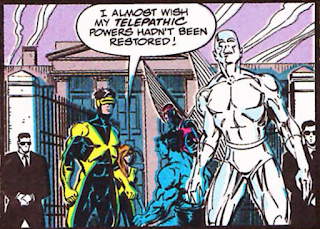 This issue reveals that Mystique, thought killed by a Shadow King-controlled Val Cooper in X-Men #265, is actually alive, and has been posing as Cooper ever since (next issue will go into more detail into exactly what happened when Val tried to kill Mystique and how the switch happened). While X-Factor-only readers (and probably some X-Men readers who'd forgotten about it) were likely confused as to where the heck all this Mystique business came from, it's another example of a dangling plot getting wrapped up in this storyline to clear the deck for the relaunch. 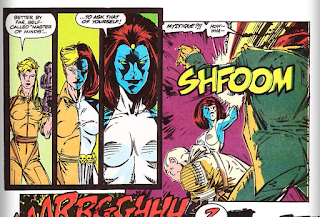 Though he spends most of the issue unknowingly at Xavier's side, the Shadow King is forced to abandon the Jacob Reisz body he took over in X-Men #253. 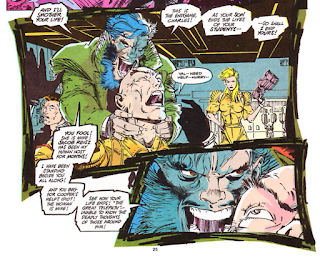 Following this, he takes control of Legion, and Portacio puts a nice Sienkiewiczian shine on the character when he becomes possessed. 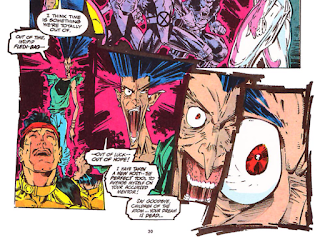 In one of the more egregious bits of sloppy plotting (it stuck out to me as a kid, even when I completely glossed over stuff like Rogue's perpetually-changing outfits), Colossus disappears entirely halfway through this issue - he's with Xavier in Washington when they meet X-Factor, but doesn't appear on the sub or go onto the island with X-Factor. Yet he'll show up without explanation on Muir Island in X-Men #280.

A Work in Progress
X-Factor is said to have been in isolation at Archangel's Colorado home (seen in X-Factor #1) since the end of last issue, recuperating from those events.

Third chapter of the story, third Rogue costume; this change is more egregious than the last, as Rogue is still out in the woods where we last saw her in X-Men #279 and, being on the run from the Shadow King, seems unlikely to have made the time to find another outfit and change into it. 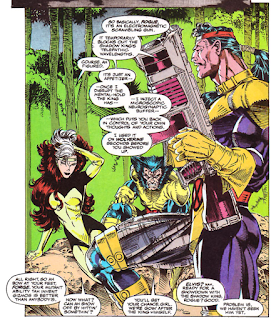 Similarly, the method by which Forge frees people from the Shadow King's control now includes some kind of inoculation, which he uses on Banshee. 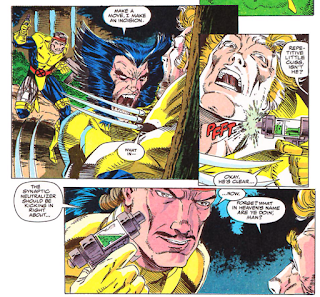 Banshee explains that Polaris is the key to the Shadow King's growing power, as he's using her new ability to absorb negative energy to supercharge himself, extending the range of his power and enabling him to ferment more negative emotions, which then empower him further, etc. All of which kinda fits with Polaris' vaguely-explained new powers, but it isn't entirely clear how Banshee learned all of it. 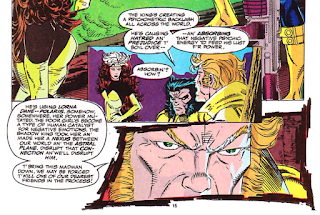 Professor X once again declares that the Shadow King is the reason he formed the X-Men. 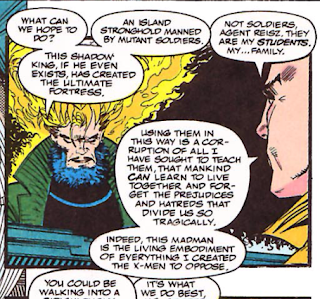 It's confirmed that at this point in time, the Shadow King only exists as telepathic energy, and that he needs to possess physical hosts in order to interact with the world physically.

Professor X offers Cyclops his condolences regarding Nathan, noting that he never had a chance to meet the child he'd have considered something of a grandchild. 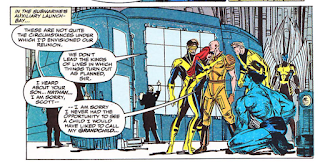 Professor X is at this point outright referring to X-Factor as X-Men. 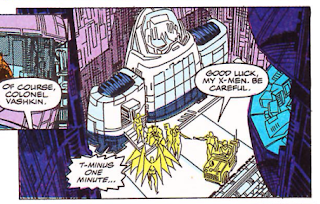 There's a Soviet agent amongst Professor Xavier's group called Colonel Vashkin; Uncanny X-Men #280 makes it clear this is meant to be Colonel Vazhin.

The Grim 'n' Gritty 90s
Professor X is dressed like he's on the verge of zoot suit riot. 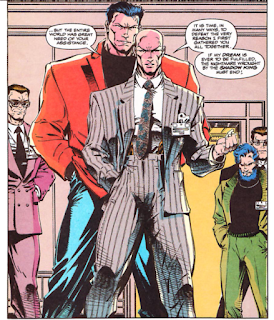 Iceman mentions going down in a blaze of glory, which Beast credits to Bon Jovi. 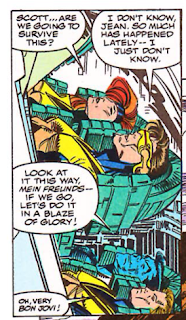 Young Love
In another surprisingly deep and effective use of continuity, Iceman's one-time crush on Polaris from the Silver Age days is mentioned when X-Factor discovers being held as the Shadow King's captive (and the thing she's being held in kind of resembles the same thing that was holding her captive in X-Men #269). 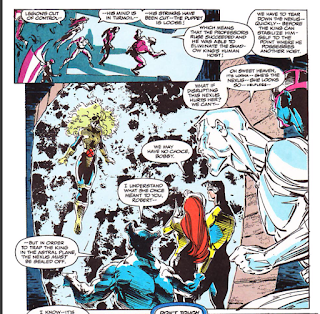 Teebore's Take
This is another serviceable issue, on which moves the story forward and into the conclusion in Uncanny X-Men #280, but which also showcases the sloppy plotting that in many ways defines this story: Rogue is, of course, in yet another costume, Forge's method of freeing the X-Men from the Shadow King's control has become some kind of injected serum, Banshee suddenly knows that Polaris is the key to everything, and, worst of all, Colossus, so important to the previous chapters of the story, just up and disappears.

But there's also some decent stuff happening on the margins of the main plot. The breakneck pace of a franchise on the verge of a major shakeup doesn't allow Cyclops much of a chance to grieve the loss of his son on-panel, but the events of the previous issue are at least acknowledged, and there's a nice moment between him and Professor X which reminds us that, sadly, Xavier never got to meet Nathan. In fact, this issue gains a lot just from seeing the original X-Men back with Professor X for the first time in decades (given that Xavier and all five X-Men haven't shared page time since X-Men #94). Best of all is the lingering menace of Shadow King, standing right there next to Professor X as Jacob Reisz, throughout the issue, a great bit of suspense brought on by the readers knowing the truth about Reisz while the characters don't (of course, in the end, it turns out Xavier did know. But we didn't know that at the time).

This can hardly be called a character-driven issue, but it's those kinds of things, the little moments happening in and around the main plot that makes "The Muir Island Saga" memorable (the best issue of the story, next issue, is nothing but those moments), that help shore up a rather sloppy narrative that is unrelenting in its drive to get everything into position for what's coming next.

Next Issue
Next week, we look at the second series of Marvel Universe trading cards in Unstacking the Deck.