The Walking Dead 6x03: Thank You 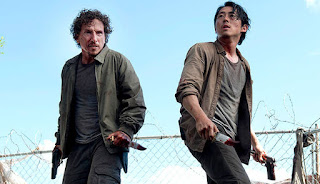 *****
Alright, due to laziness, moving and other stuff keeping me busy, I'm obviously very behind on my The Walking Dead reviews. I'm attempting to play catch up here. The plan is to do one a day until I finally catch up. So, take a trip down memory lane with reviews of these episodes you probably barely remember!
*****

How did they even manage to build that wall? I would've assumed there'd be numerous accidents like Alexandrians nail gunning their shirt sleeve to a wall panel and then flailing about helplessly as zombies eat them or an Alexandrian accidentally grabbing a knife by the wrong end or Alexandrians mistaking bleach for water. I think there were around 50 to 100 Alexandrians before the Wolves attacked. Judging by this episode, there must've roughly been 1,000,000 when the city first formed.

That was the point of this episode, right? To show us how inept the Alexandrians are? There has been a narrative in The Walking Dead (at least from Rick's point of view) that the Alexandrians have been lucky. They built a wall and haven't had to deal with all the death, heartbreak and soul-killing decisions that other people outside of walls have had to deal with. They were lucky because of the walls they've built sheltered them.

I've always argued that finding other ways to survive besides violence and sacrificing "the weak" is its own kind of strength. I understand the need to at least be trained on weapons in the world of The Walking Dead but I also think that intelligence, amongst other skills, can be just as valuable as good aim and zero empathy. I said Rick's group and the Alexandrians could learn from each other respective strengths and weaknesses and both could become better for it. That's the direction I wanted the show to go in. But, in the end, the writers hold all the cards. The writers really wanted to show how much better Rick's groups ways was in contrast to the Alexandrians and by golly they did it.

First of all, within minutes of splitting with Rick the remaining group gets attacked by a smattering of zombies and immediately one Alexandrian gets eaten, another Alexandrian accidentally shoots a different Alexandrian in the leg and then runs away (only to be eaten later). Meanwhile, a completely separate Alexandrian, David, is bitten in the back.

This leaves the runner up in Alexandrian ineptness, Nicholas, to help lead the group back to Alexandria despite the fact that he melts down at the slightest obstacle placed in front of him. (Nicholas is runner up because the champion of ineptitude is still the dude who shot his fellow Alexandrian and then ran off only to get eaten.) This all culminates in Nicholas and Glenn (after the group decides to regroup in a town despite Rick's instructions and thus getting overrun with zombies) having to light a building on fire to distract zombies.

Nicholas has no idea where to lead Glenn and, after bumbling his way around town, Nicholas finally leads Glenn to an empty spot where the building is supposed to be. Nicholas panics some more and then leads Glenn into a zombie hoard. Glenn and Nicholas find themselves atop a dumpster as zombies claw at them from below. It's finally time for Nicholas to snap out of it and prove himself useful, right? Of course not! Nicholas panics some more and then shoots himself in the head. His dead body falls on Glenn and they both fall off the dumpster where Glenn is eaten by zombies. Nicholas can't even kill himself right.

There are only two positive things I can say about the Alexandrians. One, a few of them were self-aware of their ineptitude enough to tell the others to leave them behind. Two, David got bit but decided to stay with group as long as possible to help them out. That's the kind of pragmatic attitude more people in The Walking Dead could use. If you're bit but still alive, you literally have nothing to lose at that point. Go down helping others as much as possible. But, that's about the only good things I can say about the Alexandrians. In the end, the writers have won. The Alexandrians suck!

Other Thoughts:
Last review I joked about this season just showing the same period of time from different perspective. Right now, it seems pretty close to that!

So I'm not sure how I'd feel if I overheard someone say "leave him to die if he slows you down." I mean, it sounds mean, but even I have to admit that it's kind of necessary in the zombie apocalypse (depending on how much I'm slowing people down).

Beyond that, it should've been very obvious to Heath that Michonne and Glenn were not planning on abandoning them.

In a slasher movie, sex, drugs and alcohol is a sure sign someone is going to die. In The Walking Dead, disagreeing with Rick is a sure sign of death.

I'm not sure I'm a fan of Daryl nearly abandoning Abraham and Sasha.

I'm glad that Michonne and Glenn still value lives...but this series really has me thinking that the lesson will be they, and other like-minded people, are wrong.

I have no idea how Michonne didn't get bit in the ankle while climbing the fence.

I suppose I should note that Glenn isn't confirmed dead. We saw zombies eating intestines but were they his or Nicholas'? Now we're on a collision course with not only not knowing if Glenn is dead but not knowing if we're supposed to know if Glenn is dead. I hate that!
Newer Post Older Post Home
Posted by Dr. Bitz at 1:37 AM