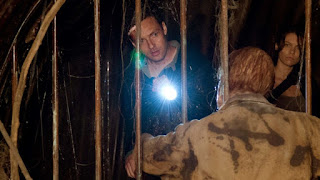 If there was an “it” couple in The Walking Dead it would certainly be (have been?) Glenn and Maggie. Now, this is mostly by default since the only real competition they have had has been...ummmm...Rick and Lori? We certainly don't want to go there. Abraham and Rosita? Well, regardless, even if they're the default couple, Maggie and Glenn have generally been likeable.

So naturally The Walking Dead writers want them to go through as much turmoil as possible. They did it in Season 4 and they're doing it again. However, the writers seemed to learn a lesson since Season 4.

After the prison fell in Season 4, Maggie and Glenn ended up getting separated. Both held out hope the other was alive and they both searched for each other. Eventually they ended up on the same path which lead to a tearful, emotional reunion.

It wasn't a bad plot line. In fact, showing characters having faith and loving one another and actually having the characters faith and love rewarded is all too rare on this show. However, I don't think the distress of the two protagonists nor their reunion captivated the audience as much as the writers would have liked.

The problem with the Season 4 Maggie/Glenn plot line was that the audience already knew both of them were alive and well. It wasn't a case of IF Maggie and Glenn would be reunited but only WHEN they would be reunited. (Of course, I half expected them to reunite only to see one of them get bitten thus giving Glenn and Maggie precious few moments left with each other. Thankfully we were spared from that!)

This season we once gain have Maggie and Glenn separated. A good part of this episode was focused on Maggie trying to locate the whereabouts Glenn. Most of the other characters believe Glenn is dead but Maggie wants to find out what happened for herself.

So, with the help of Aaron, Maggie sneaks out of Alexandria. The two travel to the sewers to get as close to the town Glenn was last seen in as possible. Unfortunately a zombie horde blocks Maggie and Aaron's path and the two have to return to Alexandria with no more information than when they left. Maggie, though, still isn't ready to give up completely.

The difference between this plot line and the one in season 4 is this time the audience is in the same shoes as Maggie. It certainly looked like Glenn died but are we 100% sure? Were those not Glenn's organs? Did Glenn survive somehow? Or are we just in denial of Glenn's true fate?

I have to admit, it is effective story telling. Once Maggie (and we the audience) learn the fate of Glenn it's tough not to think that scene won't be moving. The only question is, will the scene elicit joy or sadness?

Maggie is certainly not ignorant of the fact that she may never know the fate of Glenn. If the episode Thank You is the last we every see of Glenn I can't decide if that's good story telling (the incompleteness the audience feels by not being sure of what Glenn's fate truly mirrors what Maggie is feeling) or if it would just be a dick move by the writers.

Other Thoughts:
I liked Spencer's speech but it does seem antithetical to what The Walking Dead espouses. (Of course, it turns out Spencer doesn't believe in what he was saying, so that makes him a protagonist...right?)

Rick loves talking about how lucky the Alexandrians are and how much better his group is but, when you think about it, things in Alexandria seemed to hum along nicely until Rick and company showed up. That was when everything went to shit.

Letting personal melodrama get in the way of trying to survive an apocalypse is something that always bugs in my in any disaster movie/television show. But...I guess it's a little more understandable when those kids are teenagers. I mean, if I was Carl's age and the idea of me dying a virgin was very real, well, I bet you can guess what my first priority would have been.

I think Aaron is too hard on himself. He's done a lot of good things and, frankly, the Wolves would've probably found out about Alexandria sooner or later anyway.

Living in the zombie apocalypse would suck, I get it. So I can't really blame someone for decided to just end their life but if that's the decision you made, for God's sake, shoot or stab yourself in the head instead of slitting your wrists or dying any other way that will result in your zomibification.

I figured Eugene and Denise had a bit of a budding romance but it looks like Tara and Denise have something brewing. I would say I should be a bit more open minded and not make assumptions on people's sexual orientation but perhaps I'm just subconsciously guarded due to all the other times I had really wanted two female characters to get together but it never happened.

I think Rick and Jessie are going to get together but I'd love for that not to happen.

I have no idea what was up with the ending of Deanna banging on the wall.
Newer Post Older Post Home
Posted by Dr. Bitz at 12:38 AM