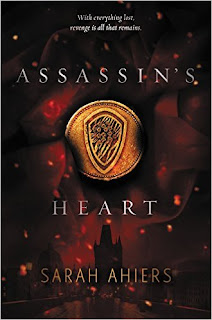 As those of you follow me on social media are probably well aware by now, February 2nd sees the release of my good buddy Sarah's debut novel, Assassin's Heart. Long time blog readers may know Sarah as Falen, who comments here occasionally, when she's not busy being awesome on her own blog and, you know, publishing excellent books.

You can read the official plot synopsis of the book on it's Amazon page, where the book is compared favorably to Game of Thrones, Romeo & Juliet, and The Godfather (which are apt, and impressive, comparisons). I've read the book in a couple different drafts (though not yet in its official, published version), and while the plot synopsis is spot-on, it doesn't speak to two of the most impressive things Sarah does in the novel. For one, her world-building is impeccable, as she crafts a believable universe for her to characters, one where assassination isn't just legal, but revered. She put a lot of thought into every detail of her universe, from the strata of assassin families and their relationships to one another, to the differences and similarities between the various fictional city-states and how religion shapes their societies, right down to the types of clothes worn and weapons used by the characters. The world of Assassin's Heart at once feels both familiar but unique, lived-in but refreshingly-new.

Secondly, in Lea, Sarah presents a remarkably compelling protagonist, someone who, despite her role as a professional killer, is ridiculously easy to root for. Lea is far from perfect, but her foibles and failures will only make you root for her more, to hurt when she hurts and cheer when she cheers (and there's more than one fist-pumping, cheer-worthy moment in this book). Lea is not an invincible superwoman, which makes her competency all the more compelling, her catastrophes all the more crushing. The world of Assassin's Heart is not a fun, friendly place, but by the time the book is done, you'll want to live in it, if only to give Lea a hug, to clap her on the back, to simply hang out with her, and that's all down to the marvelous job Sarah does at making Lea a fully-realized, three-dimensional character.

I've know Sarah for a long time now (coming up on...jeesh, seventeen years? That can't be right. We can't be that old), and been in a writing group with her for just about that long. To make it in publishing, especially traditional publishing, it takes some measure of talent, and a hell of a lot of hard work. Sarah has always had talent in spades, but she's also one of the hardest workers I know (our writing group insists she possess some ability to bend time; she insists that's not the case. We don't fully buy her denials). Assassin's Heart is the culmination of all that hard work, crafted by her not-insignificant talent, but it's also only the beginning. There's big things ahead for Sarah. She's earned it.

If you're so inclined, you can purchase Assassin's Heart here, in traditional book form, eBook, or audiobook, whatever your preferred flavor.
Newer Post Older Post Home
Posted by Austin Gorton at 12:00 PM