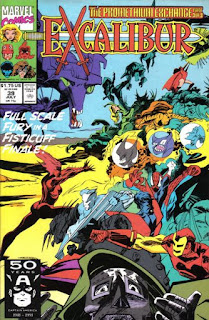 Plot
In Limbo, Phoenix is able to telekinetically hold back Doom's sword stroke, preventing him from destroying the heart of Limbo. Just then, the horde of demonic superheroes attack Excalibur and the Avengers, leaving Darkoth to fight Doom. Their struggle distracts Phoenix, enabling Doom to plunge the Soulsword into the heart of Limbo, reducing the demons to indistinct forms and opening a portal to Earth. His work done, Doom leaves the place. But in his absence, Darkoth claims the sword just as S'ym suddenly appears, wanting it for himself. But Darkoth swallows up S'ym and declares his intent to kill himself, destroying Limbo in the process and thus fouling Doom's plan. A horrified Meggan overhears this, and willing merges with Darkoth, using her empathic abilities to overcome his sorrow. At peace with himself, Limbo becomes calm and orderly, a reflection of its new master. Opening a portal, he declares he will remain as the guardian of the now-empty Limbo, and the heroes return to Earth.

Firsts and Other Notables
Darkoth ends up the new ruler of Limbo, wresting control of the Soulsword from Dr. Doom and fighting off a brief attack by S'ym, showing up here alive after all following his last appearance at the end of "Inferno", in New Mutants #73. However, Darkoth has made no additional appearances outside this issue, and is only briefly mentioned in passing when next we journey to Limbo.

The injuries sustained by Lockheed in this story will form the basis of next issue's story. The footnote also pulls a me and attributes the issue he sustained his injuries to...this issue. 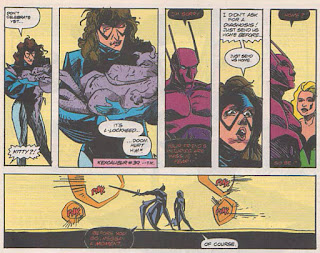 A note in this issue's letter column says that Brad Vancata colored issue #37, not Glynis Oliver, as the credits had stated. I've left Oliver listed in the credits of that post, as my general rule is present the credits as they appeared in the issue, be they correct or otherwise.

A Work in Progress
When Doom's armor is damaged, he replaces it with the armor afforded him as ruler of Limbo (the same armor Illyana and Kitty have worn whilst wielding the Soulsword), and says the armor is made from promethium. So I guess that means Illyana's armor was promethium. 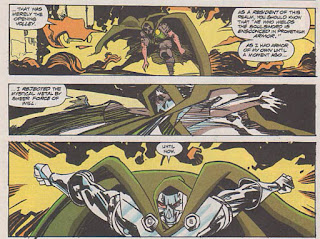 Darkoth confirms that in the wake of Doom's defeat, Limbo has been purged of promethium, establishing a reason for Tony Stark or someone to not figure out a way to bring its limitless energy to Earth for the benefit of all.

Artistic Achievements
In addition to the still-a-mess art, this issue also features a lot of dialogue from Darkoth, which is rendered via purple ink on a blackground and it's, well, it's borderline illegible in most places.

Teebore's Take
I read online recently that when Lobdell was given this assignment, knowing he was just killing time before Alan Davis came back in issue #42, he was also tasked with tying up some lingering loose ends in anticipation of Davis' return, at Davis' request. I couldn't find a source for that idea, so I have no idea if it's true, but it would make sense: Lobdell's run has featured a surprising amount of loose-thread-tying-up for an ostensible fill-in: Nightcrawler's teleportation problems were resolved in issue #37, Lobdell will soon tackle the issue of Excalibur's relationship with the alive-after-all X-Men, and this entire storyline, in retrospect, seems to be about addressing Kitty's ownership of Illyana's Soulsword and the status of Limbo following Illyana's death. That becomes even more apparent this issue, as a new ruler of Limbo is crowned and the place changes to reflect his rule, becoming, for all intents and purposes, a blank slate, thus cleaving Excalibur from any additional ties to the place (that, of course, won't last, but Davis at least won't be dealing with it).

Whether Lobdell was specifically asked to do it or simply took it upon himself to clean things up, the end result is the same: despite the series still lacking a clear purpose, a distinct identity, or a consistent artistic vision, this batch of issues is a far cry better than the usual fill-in fare. Excalibur is still the least of the X-books at this point, but it could be (and has been) worse.