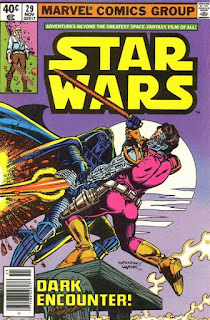 In a Nutshell
Darth Vader battles Valance the Hunter

Plot
Aboard his Star Destroyer, Darth Vader tortures a Rebel spy, learning the name of Rebel deserter, Tyler Lucian, who knows the identity of the pilot who destroyed the Death Star. On Centares, Valance the Hunter, seeking the same man, roughs up a cantina owner and his patrons in order to learn the whereabouts of Lucian. After running afoul of some Stormtroopers, Valance finds Lucian hiding out in the tower of an old resort, long abandoned after the Empire poisoned the water, but he arrives just moments before Vader. Meanwhile, on Yavin Four, Artoo is restored to full operation, while Luke learns that Leia has left on a mission alone. Back on Centares, Valance and Vader fight, with Valance unwilling to let Vader get the identity of the Death Star destroyer from Lucian. 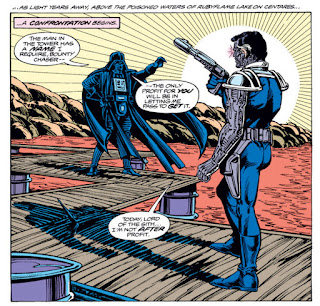 Vader seemingly defeats Valance, but a badly-damaged Valance manages to get a vice-like grip on Vader's leg, and slowly drags him into the poisoned water. Just before he hits the water, Vader cuts off Valance's hand with his lightsaber. But Lucian, inspired by Valance, finally finds his courage, and plunges into the water himself, ending his life and preventing Vader from learning the identity of the Death Star destroyer, from him, at least. Returning to his ship, Vader declares that everyone is at alert status until he says otherwise, then begins his long search again.

Firsts and Other Notables
Darth Vader gets his largest role yet in an issue of this series, as he comes into conflict with Valance while on the hunt for the identity of the pilot who destroyed the Death Star. 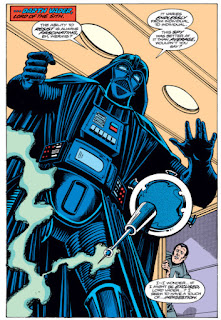 This issue marks the first and only appearance of Tyler Lucian, a former Rebel who fled Yavin Four when the Death Star approached, but heard over the com about Luke destroying it as he flew away. Targeted by both Valance and Vader because of this knowledge, he ultimately kills himself to prevent Vader from extracting the info from him.

Artoo is repaired this issue, thanks to the parts acquired by Luke and Threepio in issue #27. 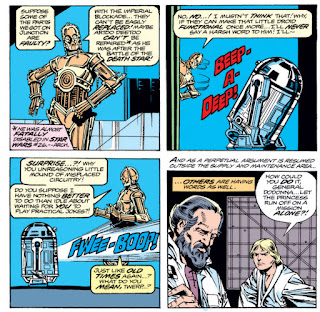 Luke also learns that General Dodonna has sent Leia on a mission, saying she convinced him she had more value than just being a symbol, and after Luke objects, he suggests another mission for Luke, all of which is setup for future issues.

A Work in Progress
Wermis, the Imperial officer attending Vader in "The Wheel Saga", appears again in this issue, serving the same function.

The anti-droid sentiment is, not surprisingly, played up in this issue, with two Stormtroopers being perfectly fine with Valance killing a few cantina patrons, until they discover he's cybernetic, and are unwilling to let him go after he killed "normal organics". 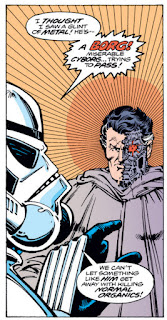 Later, another pair of Stormtroopers complain about being stuck in their armor for so long, making them feel like borgs. 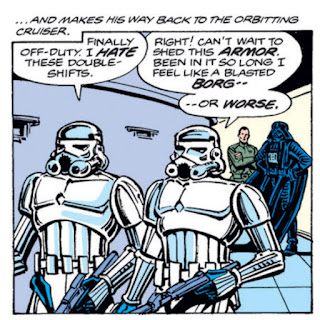 The story notes that Centares was once a thriving resort world, known for its lakes which were pleasantly warmed by underground volcanic activity, until the Empire came to the world and harvested the lava beds and poisoned the water with industrial waste. The idea of the Empire poisoning/destroying worlds simply as a by-product of industry (as opposed to as a military maneuver) is something that will pop up a lot in Expanded Universe fiction. 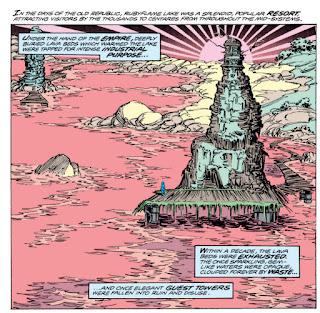 Valance tells Vader that Luke represents something better, a time when even someone like Valance may not be considered a freak, calling it a foolish dream, but no moreso than destroying the Death Star once was. 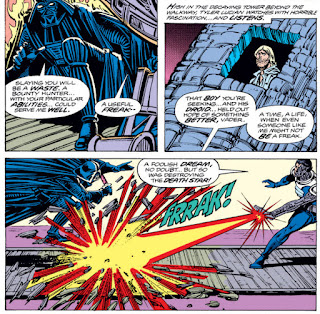 Knowing full well that Vader will, eventually, learn Luke's identity, Valance is content to merely delay Vader for the time being, as he knows Luke is powerful in his own right and believes, with enough time, he'll be able to defeat Vader, which is nice bit of unintentional foreshadowing for the saga as a whole. 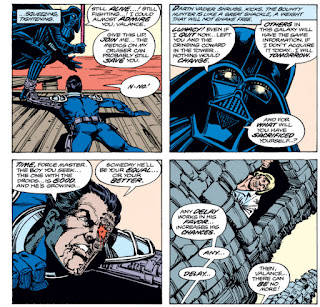 That 70s Comic
Valance hangs a lampshade on comic book characters' tendency to speak out loud to themselves in order to deliver exposition to the reader when he manages to track down Tyler, who was in the midst of doing just that. 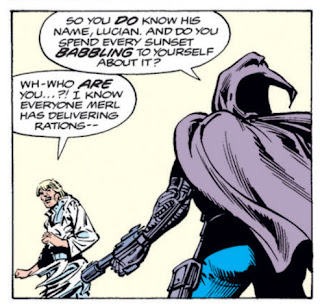 Um, Actually
Vader is depicted as being much more agile than special effects technology at the time would have allowed him to be in the movies (leaping across bridges and whatnot), and which in-universe we understand to have been difficult for him due to the nature of all of his prosthetics and armor.

Similarly, hindsight adds another layer of thematic resonance to the Vader/Valance fight, as we now know that Vader is as much, if not more, a cyborg as Valance himself (though the issue does acknowledge this somewhat: when Vader offers Valance a chance to rejoin the Empire, he mockingly turns it down, saying he could be a freak serving the Emperor just like Vader).

Teebore's Take
The danger in using Darth Vader in stories set between Star Wars and The Empire Strikes Back (and between Empire and Return of the Jedi) is overexposure. Have Luke face off with Vader too many times between their cinematic encounters, and those cinematic encounters lose much of their power. One way to address that concern, and still use Vader (because, let's be honest, Star Wars licensed fiction in this era without any Vader would just be disappointing), was used in "The Wheel Saga": Vader was involved in the story, but he and Luke never encountered one another directly. This issue is another example of how to do it: tell a story where Vader is the focus, and Luke is nowhere to be found.

Instead of battling Luke (or Han, or Leia), Vader here goes up against Valance the Hunter, which is a shrewd move on the part of Goodwin & Infantino. Not only does it allow them to use Vader without fear of watering down events in the sequel film, it also allows them to further (and, ultimately, finish) the arc of Valance, while also continuing to develop Vader's ongoing hunt for the identity of the pilot who destroyed the Death Star. The end result is one of the series' strongest issues yet, something firmly rooted in past events yet unlike anything the series has done before (as in Valance's first appearance, the series' main characters only make the briefest of appearances), handing over the narrative entirely to a pair of ostensible villains.

While it's a shame this marks the end of Valance, the character does, at least, get something rare in serial fiction: a complete story, with a character arc that starts in one place and ends in another. It's doubtful that Valance's story could have ended any other way than with his death, but it still would have been nice to see that end teased out a bit, just to get a few more appearances out of the character. Nevertheless, coming as it does, it leaves us wanting more (another rare thing in serial fiction), and the brevity of Valance's story is just another reason for why it's the crowning achievement of this series thus far.