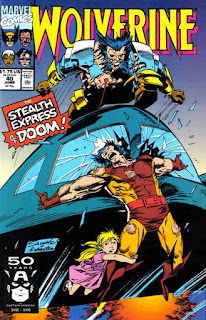 In a Nutshell
Elsie-Dee and Albert are reunited in New York.

Plot
At the X-Mansion, Forge examines Elsie-Dee, determining her to be made mostly of explosives, and that her destruct sequence has only been halted, not eliminated, making her a continuing danger. In Venice, federal agents arrive to obtain Albert, but discover he has healed and upgraded himself, making his escape from the police station easy. Able to sense Elsie-Dee across the country, Albert breaks into a military base and commandeers a stealth aircraft to fly to New York. In the city, Wolverine and Elsie-Dee hustle pool, but as Albert draws closer, Elsie-Dee picks up his signal, and requests Wolverine take her to higher ground so she can get a solid lock on it. The pair race to the top of the World Trade Center, where Elsie-Dee is able to establish communication with Albert, just as he reaches the city, flying the jet into Wolverine. The two fight, until Elsie-Dee breaks it up, telling Albert they're free of Pierce's programming thanks to Wolverine. Just then, the stealth aircraft is attacked by US fighter jets who had been pursuing it, and the plane crashes into the river, along with Albert, Elsie-Dee and Wolverine.

Firsts and Other Notables
Along with Storm, carrying over from the previous two issues, both Forge and Jubilee guest star in this issue. Given that Wolverine and Jubilee have been operating as a hero/sidekick partnership for almost two years now over in Uncanny X-Men, her appearance in this series is long overdue, and she'll remain a fairly regular presence in the book up through issue #75. 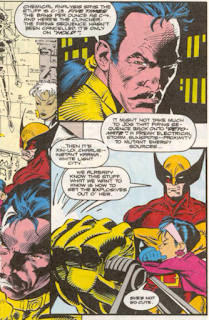 Similarly, the four X-Men appear in the X-Mansion subbasement, making this the first appearance of the X-Mansion ever in this series. Given the circumstances surrounding it, between the X-Men being in Australia, then there being no X-Men, and Wolverine always being very determinedly removed from the events of the other book in this one, its understandable, but at the same time, it's kind of amazing to realize that it took forty issues to show Wolverine in his team's central base of operations.

After upgrading himself between issues, Albert adopts his character's more familiar and consistent look in this issue, with the metal "eyepatch" and pointed shoulder pads (this, for example, is the look used for his action figure). 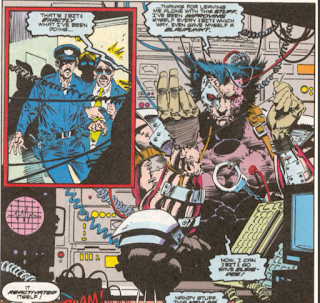 The Chronology Corner
As with Storm in issue #38, Forge and Jubilee appear in this issue following the end of the "Muir Island Saga" in X-Factor #70.

The Grim 'n' Girtty 90s
Needless to say, the climax of this issue, in which Albert flies a plane at and crashes into the World Trade Center, could only have happened before 2001. 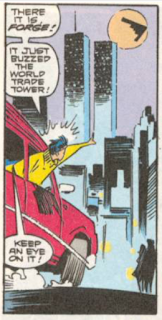 Teebore's Take
Though they'll stick around for a couple more immediate issues (and be a presence in the book beyond that), this effectively ends the initial Albert/Elsie-Dee story, but the big takeaway from this issue is just how much bigger the series feels with Wolverine back in New York and interacting with fellow X-Men again. Given that they already have a hero/sidekick relationship in X-Men, it makes sense to bring Jubilee into this book (it's frankly a shame it's taken this long), and she'll thankfully remain a recurring presence in the series off and on for awhile moving forward, helping the book feel more like a traditional solo series. At the same time, the move to more familiar settings doesn't take anything away from the series' existing tone, either the loonier, more whacky one of the immediate story or the larger noir-ish high adventure vibe Hama & Silvestri have been working since their run began. Ultimately, it's the best of both worlds, and this issue might just be the best example yet of what a "traditional" Wolverine solo series looks like.