The Walking Dead 6x07: Heads Up 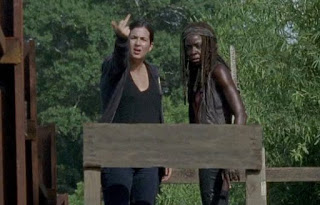 Is it surprising? I'm not sure. I will admit that when I first saw the end of "Thank You" I thought Glenn was a goner. This is partially because I've thought for the past few seasons that Glenn was primed to die. Glenn is the most expendable character whose death would get the biggest reaction. (In other words, obviously Rick and Carl are safe since they're the two primaries on the show, I don't think The Walking Dead would have the guts to kill off ultra-fan favorites Daryl, Carol and Michonne and anyone else wouldn't get as much of a reaction as Glenn would. Maybe Maggie?)

Anyway, as the episodes moved forward and there was no confirmation of Glenn's death I, as well as most of the internet, got suspicious. There's the old saying in serialized fiction, no body equals no death. And, sure enough, we find that Glenn preposterously survived. Not one zombie got in a single bit on Glenn? Not one!?! Whatever.

This episode follows Glenn as he waits out the zombies underneath a dumpster and then partners up with Enid to journey back to Alexandra. Enid is, of course, all about only herself and believing she doesn't need anyone and doesn't want to get attached but Glenn eventually breaks down Enid's barriers because who could say no to Glenn's adorable face? I didn't mean it like that, you perverts. It's obvious Glenn and Enid's relationship is very paternal. They're like Wolverine and Kitty Pryde...if Wolverine was without adamantium claws and had an adorable face. I think I got off track somewhere.

So, Glenn teaches Enid that humans need to be around other people. They travel back to Alexandria only to see the zombie horde that is at Alexandria's walls. Glenn finds balloons that were originally supposed to be used as markers to now distract the zombies.

In Alexandria Maggie sees the balloons and immediately realizes Glenn is alive. Don't get too excited. Let's not forget that this is The Walking Dead. The Walking Dead may love gore, surprise character deaths and teaching us that killing anybody who is not a part of your close knit group is prudent but the thing it loves the most is snatching defeat from the jaws of victory. So, naturally, just as Maggie gets excited to see Glenn a structurally unsound church tower falls over and breaks down the walls of Alexandria. The zombie horde has been let loose upon Alexandra's citizens!

Other Thoughts:
In elementary school my class attached hand written letters to balloons. We let them go into the air outside in hopes that somebody, somewhere would find and read the note. I really hope nobody saw those balloons and mistook them as a signal that their presumed-dead spouse was actually alive.

There was also a lot of activity in Alexandria too but it was mostly focused on how much the Alexandrians still suck. Rick did soften towards Tobin near the end but Rick is still willing to let Spencer die rather than try to help.

Speaking of Rick and his desire to see Alexandrians die, he got mad at Tara for having the audacity to help save Spencer's life. Tara flicking off Rick in response may be one of my favorite moments in the history of The Walking Dead.

I wonder how much the zombies invading Alexandria will distract Carol from her mission to expose Morgan for the evil pacifist he is. I'm not really a fan of Morgan keeping one of the Wolves alive either but you know she's going to go apoplectic when she finds the Wolf. He seemed pretty secure, though. And you know what? He may have some valuable information!

I think it's safe to call the gun Rick is teaching Ron how to shoot “Checkov's Gun.” I figured it would be Rick in Ron's site but now it looks to be Carl.

I still question whether the show should've shown us Glenn was alive before he came face to face with Maggie. As mentioned in my last post, the unique thing about Maggie's dilemma regarding whether she should give up on Glenn or not is that the fans were in the same boat. Think how impactful the scene of Maggie getting to see Glenn standing before her and realizing that he's alive would be if this was also the first time the audience saw that Glenn was alive. They could've shown us HOW Glenn survived later in a flashback. I just feel like it was a real missed opportunity.
Newer Post Older Post Home
Posted by Dr. Bitz at 4:02 PM