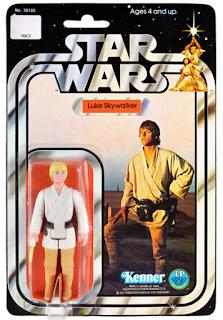 There is arguably no film more directly tied to its merchandise in the eyes of fans and the general pubic than Star Wars, and no licensed toy line has had a bigger impact on the history of toys than the Star Wars figures. The success of Star Wars toys led to countless film properties in the 80s and the 90 churning out tie-in toy lines to varying degrees of success and relevance, while the Star Wars toys also ushered in the age of the 3.75 inch action figure, which the revamped GI Joe, amongst other, would adopt to massive success in the Real American hero line.

Somewhat famously, Kenner (the initial maker of Star Wars action figures) underestimated the popularity of Star Wars, and didn't have any product ready for the holiday season of 1977 (which in itself boggles the mind, given how nowadays new figures are released well in advance of the film they're supporting; if Star Wars hadn't been a huge hit, what would have been the point of having action figures out sometime in 1978?). In order to meet the demand, they essentially sold a promise, in the form of the "early bird certificate", comprised of a cardboard backdrop and a coupon that could be mailed in to Kenner in exchange for four figures. As a result, hundreds of thousands of kids received for Christmas in 1977 the promise that they'd eventually get toys sometime later (Kenner limited the Early Bird packages to 500,00; in the first year of release, they would go on to sell over 40,000,000 figures overall). 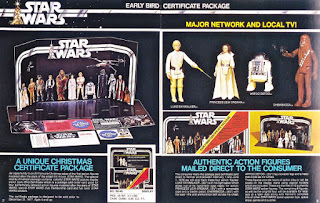 From a modern perspective, the figures are fairly basic. Only five points of articulation: upper leg, shoulders, and a fully rotating head (GI Joe would break the ground on knee, elbow and waist movement within a few years of this initial line, and also increase the range of motion for the upper legs). The sculpting is fairly basic in terms of likenesses (nobody would accuse Han's figure of looking like Harrison Ford, for example), but the rest of the figure's body is fairly detailed, and for the most part, the iconic looks of the characters' on film are recreated as well as possible given the technology at the time.

Also, even in the earliest days of the line, the figures have a lot of extra playability added to them. In addition to the packed-in accessories (usually a blaster of some kind that the figure could wield, another innovation that GI Joe would expand on and arguably perfect), there were things like the vinyl (and occasionally, soft-goods) capes on figures like Princess Leia and Darth Vader, which gave them a little added texture and visual distinction, and "action features" in the form of Luke, Vader and Obi-Wan's extendable lightsabers, which could be extended and retracted from their right hands. Though most of the detail on Artoo's body's came in the form of a sticker, turning his "head" made a clicking sound vaguely reminiscient of some of his movie sound effects, and both his upper dome and all of C-3P0 were vac-metallized, giving them a shiny, robotic look (which, at the time, was nothing to sneeze at).

While I was without a doubt both an action figure junky and a devout Star Wars fan as a kid, being born in 1981 the Star Wars toys were just a bit before the time in which I'd be old enough to have some say in what kinds of toys I wanted. Any Star Wars figures still on the shelves when I would have been making purchase decisions would likely have been from the "Power of the Force" line, which closed out the initial release of Star Wars figures following Return of the Jedi, and/or loose figures picked up at garage sales or thrift stores. So as much as I WANTED more Star Wars figures, because I was a huge fan of both the movies and action figures in general, by the mid- to late-80s, Star Wars was entering its hibernation period, and as a result I was much more of a He-Man/Transformers/GI Joe (and Teenage Mutant Ninja Turtles, though that eventually became much more of my younger brother's toy line than mine) kid than a Star Wars kid, at least in terms of action figures.

As a result, I never had a lot of the classic figures from early in the line, except for the ones that got repackaged and re-released as part of a later movie's release. My Luke, Han and Leia  figures, for example, were all from later films (specifically Jedi Luke, Carbonite Han and Endor Leia, from Jedi and/or the Power of the Force line). Of this initial wave, I had a Darth Vader (though, as he was perpetually re-carded throughout the line, I doubt I had a specifically Star Wars Darth Vader), as well as a Stormtrooper (another re-carded figure; mine was acquired at a garage sale, so I have no idea which release he was part of) and a Tusken Raider (sans the plastic cape, another garage sale find). I also had an Obi-Wan figure, though with his plastic cape intact, suggesting I purchased it carded from a store instead of loose. Obi-Wan was another figure who received multiple releases, making it unlikely mine was from the initial wave either.
Newer Post Older Post Home
Posted by Austin Gorton at 12:00 PM