The Milch Studies - NYPD Blue Season One, The Story 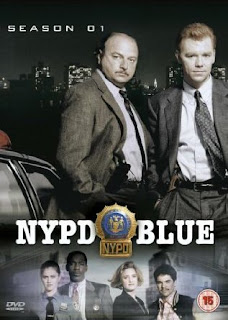 Cable television (and Netflix) has trained audiences to expect season-long story arcs with only the occasional interruption for smaller stories; a practice most network TV dramas still resist. Watching the first season of NYPD Blue, it’s not difficult to see the DNA of today’s “acclaimed” television. Not only in the flawed heroes, but in the episode-by-episode escalation of the season’s main storyline. One of the tricks David Simon employed on The Wire was to open each season with a seemingly benign incident that eventually escalates until it’s a major drama involving the community, police force, media, etc. Looking back on NYPD Blue’s first season, I see David Milch and Steven Bochco pulling the same trick. (My favorite example from The Wire is the seemingly petty controversy over who pays for a church window.) Virtually every “important” event from Season One stems from Andy Sipowicz’s grudge with overweight goomba Alfonse Giardella.


This is how the story begins…Sipowicz has an irrational hatred for low-level mobster Alfonse Giardella. Sipowicz orchestrates a “hummer bust” on Giardella (he puts nails in Giardella’s tires in order to pull him over and confiscate untaxed cigarettes in his trunk); a charge Giardella beats in court. Sipowicz, already deep into alcoholism, later seeks Giardella out in a restaurant and humiliates him in public. Giardella, in retaliation, pressures Sipowicz’s regular prostitute Lois to set him up during their weekly encounter. Giardella emerges from the closet and shoots Sipowicz repeatedly, leaving him for dead.

Sipowicz’s partner, Detective John Kelly, then goes on a “John Wayne” mission to bust or simply inconvenience every operation owned by Giardella’s boss, Angelo Marino. Joining him is a young cop from Anti-Crime, James Martinez. Kelly’s harassment catches the attention of Angelo Marino, who refuses to give Giardella up to the police. In order to deal with Kelly, he threatens patrolwoman Janice Licalsi with the exposure of her father, a cop on the mob’s payroll. He orders her to get close to Kelly and to kill him. Licalsi quickly falls in love with John Kelly and instead turns on Marino, killing him and his driver.

Most of these points were covered in the pilot episode, and that doesn’t even get into John Kelly’s relationship troubles with his ex-wife, or Lieutenant Fancy’s disgust with Sipowicz’s job performance and Sipowicz’s resentment of his black boss. Every event that drives the first season (and the four episodes of Season Two that write John Kelly off the show) stems from Sipowicz’s unexplained hatred of goofball mob soldier Alfonse Giardella. The show never has anyone stop and point this out (Sipowicz never even realizes that he’s indirectly responsible for his partner being forced off The Job in Season Two), but it’s clear in retrospect.

Sipowicz’s out of control behavior affecting everyone around him is a recurring theme of the early episodes. Even though the character of Sipowicz might be the most famous drunk in the history of television, he’s only shown drinking on a few occasions during the twelve years of the show (the pilot, his relapse in Season One, and his second relapse in Season Three). The show evolves into the story of Sipowicz’s attempts to reassemble his life and prove to himself that he’s worthy of his gold shield. That’s the heart of Season One, even if it rarely interacts with the increasingly convoluted Angelo Marino murder storyline. 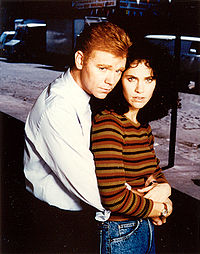 The Angelo Marino plot was originally intended for thirteen episodes, but ran closer to twenty-five. Or, to be more accurate, the repercussions of Angelo Marino’s death spiraled out further than the creators intended. The original plot, as I understand it, is that Janice Licalsi is a cop working for the mob, she turns on the mobsters, John Kelly discerns her secret, agonizes over what to do, forgives her, and they become a couple. Kelly’s ex-wife, meanwhile, becomes an Assistant District Attorney and he’s forced to deal with his unresolved feelings for her while on The Job. In practice, Milch and the writers found Janice Licalsi to be radioactive after having her commit two murders, believing that the audience wouldn’t buy her romance with the (mostly) by-the-book John Kelly. And a peripheral character who turned out to be a great love interest for Sipowicz was receiving all of the ADA storylines, leaving Kelly’s ex-wife Laura with little to do.

The writers tried their best to make their original plan work, which is likely why we discover a few episodes in that Janice Licalsi was never truly working for the mob; she was protecting her father, who wasn’t all that useful to the mob anyway. When Licalsi’s father commits suicide, she leans on John Kelly, which is intended as an emotional bonding moment for the couple, and one of the events that leads Kelly to forgive her for the murders. John Kelly, however, is shown in every episode to be a sanctimonious cop, intolerant of the moral failings of others. Is he really going to fall for someone who got away with a double-homicide? The less pure Sipowicz wouldn’t have a problem with this (when he eventually learns Licalsi’s secret, Sipowicz remarks that they should “run her for mayor”), but it doesn’t suit John Kelly, Supercop.

Realizing that Kelly and Licalsi can’t be a couple, the writers have the previously unrepentant Licalsi become increasingly tortured by her actions. She eventually turns herself in to the police after a discussion with Kelly’s priest. That’s simplifying and eliminating numerous plot twists (and the intriguing relationship Kelly has with his priest, which creates some of the season’s highlights), but ultimately, that’s where we are at the end of Season One.

As for Sipowicz, he’s in the dark for most of this season on John Kelly’s moral dilemma, just as Kelly seems indifferent towards Sipowicz’s attempt to get sober. As mentioned earlier, this is due to David Caruso’s insistence that he was the star of the show, which precluded the number of scenes he would shoot with Dennis Franz. The unintended consequence of Caruso’s ego was to give Dennis Franz even more time to develop the complex character of Sipowicz, making it clear to the producers and viewers that Sipowicz is the most engaging character on television. If Caruso wants to leave to become a movie star, let ‘im.

Next time: I examine the highlights and lowlights of Season One, and tackle one of the show’s most baffling dropped storylines.
Newer Post Older Post Home
Posted by G. Kendall at 5:00 PM