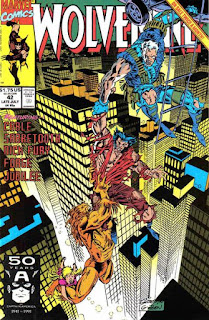 In a Nutshell
Wolverine learns Sabretooth is NOT his father after all.

Plot
Wolverine and Sabretooth continue their fight even though the chamber they're in is filling with water. On the other side of the wall, Elsie-Dee urges Cable to blast through the door to release them, but Cable refuses, saying Wolverine doesn't bring out his altruistic side. Elsie-Dee responds by removing her head and throwing it at Cable, distracting him enough that her body gets a hold of his gun and blasts an opening in the wall. Wolverine, Sabretooth and the water come rushing out, sweeping everyone into the main causeway, where they get trapped by the grate lowered by the Morlocks. But Elsie-Dee removes her head and detonates her body, destroying the grate and sending them back out into the East River, where they're picked up by Nick Fury and SHIELD, called in to help by Forge. When Sabretooth regains consciousness, he attacks Wolverine, but Elsie-Dee's head bites down on his neck, forcing him from the helicopter, and the two tumble into the river below. Afterwards, a SHIELD technician runs a blood test, confirming Sabretooth is not Wolverine's father. In the river below, a revived Albert retrieves Elsie-Dee's head.

Firsts and Other Notables
After last issue came down pretty hard on the idea that Sabretooth is Wolverine's father, this issue confirms that he is, in fact, not blood related to Wolverine in any way, after a SHIELD agent performs a blood test on both characters. Nick Fury does note, however, that Sabretooth believes he's Wolverine's father, keeping his dialogue last issue (as well as in previous encounters which seemed to hint at their father/son relationship) consistent. 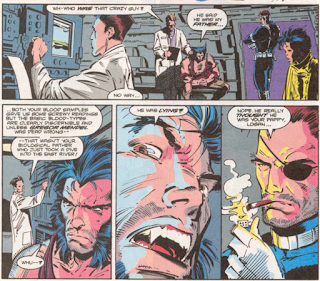 Nick Fury admits he knows more about Wolverine's past, but refuses to tell him any more, saying it's top secret. I don't think this particular vague hint goes anywhere specific, but it's possible it comes up later in the series when Hama dives deeper into Wolverine's past and the history of the Weapon X project. 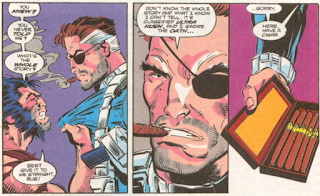 Cable is still around for this issue, though he doesn't really add much to the proceedings.

As with the previous issue, this one received a second printing, denoted by the gold logo on the cover.

A Work in Progress
Cable notes that Wolverine doesn't bring out his altruistic side, a nod to New Mutants #93-94. 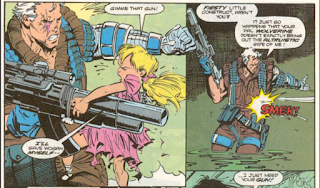 Forge calls in a favor to get Nick Fury's help locating Wolverine, citing all the weapons he's made for SHIELD in the past, which mostly fits with his backstory as a weapons designer for the government. 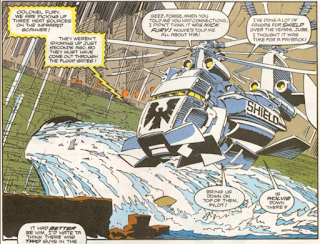 Teebore's Take
This issue is best known for putting to rest the question of whether or not Sabretooth is Wolverine's father, confirming he is not, after the previous issue teased the idea that he is. It's a notable development for two reasons. One, it's not entirely clear what motivated Hama to cover this ground now. He will certainly devote plenty of future issues to exploring Wolverine's past, but this particular bit of exploration, arguably one of the most important ones, comes in the middle of a story about Wolverine dealing with an explosive lisping robot (who, in this issue, uses her head as a weapon) and an android clone of himself. There's been a consistently whacky tone to the Elsie-Dee/Albert storyline from the beginning, and that continues here, making the relatively more serious discussions of Sabretooth and Wolverine's relationship seem a bit at odds.

Furthermore, given how far afield the X-Men in general and Wolverine in particular have been from their usual trappings of late, it isn't even like Wolverine and Sabretooth have interacted much recently; this story is their first encounter since "Inferno", so while the question of their relationship may have long been an open secret at Marvel and even amongst many fans, it's not like it was something either party was likely buzzing about at this time. Given how much Hama will come to play with Wolverine's mysterious past in future issues, maybe he just felt like he needed to clarify this particular relationship now, clearing it from the field to make more room for the revelations that are coming?

Secondly, as much as Hama clearly intends this to be the definitive word on their relationship as far as he's concerned, he writes it in a way that leaves plenty of avenues for other writers to reverse his declaration: the still SHIELD agent delivering the results of the blood test could turn out to be shady, the test itself faulty, or it could be revealed that Nick Fury orchestrated the whole thing as a ruse, etc. What's remarkable is that no other writers have taken advantage of those outs to retcon this issue and change Wolverine and Sabretooth's relationship back to the one Claremont always intended (Origin teases the idea of a Wolverine/Sabretooth blood relation, but never commits to it). For as much as it was generally considered an unconfirmed truth that Sabretooth was Wolverine's father prior to this issue, Hama's somewhat out-of-nowhere story has stood the test of time as the final statement on the matter. Whatever his reasons, for better or worse, Wolverine and Sabretooth have remained not father & son since this story saw print. Whether you like or dislike that idea, it's pretty amazing that it's held up this long.