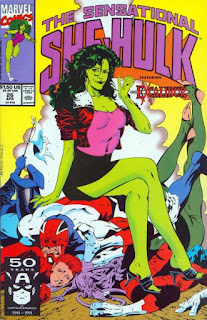 In a Nutshell
Excalibur and She-Hulk team-up to battle a trash monster.

Plot
En route to London to defend Meggan in court, She-Hulk's plane is attacked by a possessed Captain Britain. The rest of Excalibur arrives, helping to land the plane safely and chase off Captain Britain. Afterwards, they explain to She-Hulk how Captain Britain is being possessed by an evil spirit, which had earlier possessed Meggan (leading to the charges She-Hulk is there to help her fight) before jumping to Captain Britain. She-Hulk comes up with an idea to defeat the creature and prevent him from possessing anyone else in the process. The rest of Excalibur tracks down and attacks Captain Britain, before She-Hulk appears wearing little but trash, drawing the creature out of Captain Britain's body. Just then, Rachel telekinetically hurls trash at the creature, which it absorbs. She sends more and more garbage at it until its overloaded, and explodes, raining trash on the city. With enough evidence of possession to clear Meggan's name, all that's left is to clean up the possessed trash, which is turned into recycled paper.

Firsts and Other Notables
This issue is part of She-Hulk's second solo series; the first, which introduced the character in 1980, ran 25 issues before being cancelled. From there, the character popped up in various places as a guest star, eventually joining the Avengers and, later, the Fantastic Four, during John Byrne's run on the book. Byrne went on to launch this second She-Hulk series in 1989, establishing it as a more comedic book than the usual Marvel fare, in which She-Hulk would often break the fourth wall to talk to the readers and comment on various superhero tropes, though Byrne only lasted eight issues before eventually giving way to Steve Gerber.

Oddly enough, Furman on this series at this time was in a similar position to Lobdell on Excalibur: marking time in an extended fill-in run, waiting for the series' initial creator to return. After launching this series, John Byrne left the series, and Steve Gerber took over, keeping the more comedic tone, before leaving the book himself.  As of this issue, Furman is in the midst of four issue fill-in run, after which the next regular writer/artist on the book (following three more post-Furman fill-in issues) will be John Byrne once again, just as Lobdell is filling in before Alan Davis comes back to Excalibur.

Art comes from future superstar artist Bryan Hitch, also British, who collaborated with Furman on past projects and was the regular penciler of She-Hulk at this time. However, he has yet to develop the more photo-realistic widescreen style that will make him hugely popular in the late 90s and 00s; much of his work here is unrecognizable relative to his later work (though quite nice in places, with shades of Alan Davis).

The Chronology Corner
On sale the same time as Excalibur #36, this issue takes place between #34 (the conclusion of "Girls School from Heck") and issue #35, and after Excalibur's appearance in Thor (which occurs between those two issues as well).

She-Hulk, brought in to the story to serve as Meggan's defense lawyer, is apparently licensed to practice law in both the US and the UK. 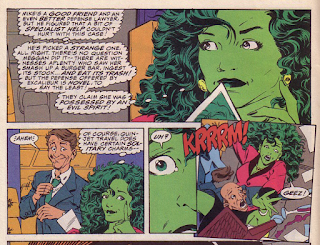 The Grim 'n' Gritty 90s
In the end, the villain gets turned into recycled paper, a nod to that newfangled 90s fad. 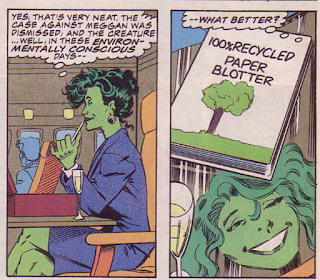 Teebore's Take
On the surface, a She-Hulk/Excalibur pairing seems fairly random - She-Hulk is not a mutant, has no strong connections to anyone in the mutant community, and isn't connected in any serious way to England or the larger UK. But both series have a reputation, at a time when most comics were getting increasingly grim and "serious", for being lighter, more comedic books, so tonally, a team-up between the two makes sense (even if both books' comedic heyday, under John Byrne and Claremont/Davis, respectively, are both behind them and looming on the horizon at this point). This issue is hardly a laugh riot, but it is fairly tongue-in-cheek (sometimes to it's detriment; She-Hulk defeating the villain by stripping down and wearing a trash bikini is...something).

Also, it's worth noting that, at a time when the X-books are huge (and on the verge of being even bigger) and Excalibur is stuck in a prolonged period of creative malaise, it is Excalibur that is routinely serving as the X-books' representative in other series: they appear here, in Thor, in Quasar (in an issue I didn't review since Excalibur's involvement was minimal). Some of that is down to circumstance - the X-Men can't exactly make guest appearances during the non-team era when there's no team of X-Men - but even with X-Factor around, the mutant team whose defining characteristic, in-universe, is being the "public" mutant team (and thus, most likely to make guest appearances throughout the Marvel Universe), Excalibur is doing the guest appearance heavy lifting.

Most likely, this is due to that same creative malaise; all the other X-books have a strong creative voice, either Chris Claremont or the bevy of future Image artists who are quickly realizing Marvel will dance to their tune no matter what, enabling them to wave away attempts to boost sales in other titles by featuring their characters. Excalibur, with no entrenched creator or series-identity for almost half its existence at this point, has no such ability, and thus, becomes the de facto "guest star-ers" of the X-books at this time.