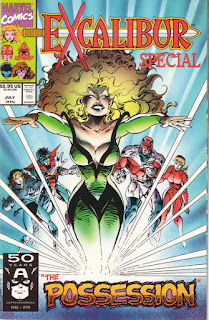 In a Nutshell
Meggan is possessed by the ghost of Changeling.

Plot
Following a training session with Nightcrawler, Meggan suddenly takes on demonic characteristics and attacks the team. Phoenix manages to subdue her, and senses that she's been possessed by a malevolent force. Alistaire Stuart directs the team to an old contact with mystical knowledge named Myrd. With Myrd's help, the team begins a seance to identify the spirit possessing Meggan. After calling forth Mickey and Jackdaw, two spirits from Captain Britain's past, as well as Doug Ramsey, Professor X appears. However, Professor X morphs into Changeling, the true culprit, who has targeted Meggan in order gain a new corporeal form and seek out his revenge. Together, Excalibur manages to cast out the spirit of Changeling, freeing Meggan, after which Myrd reveals himself to be Merlin, the wizard who first granted Captain Britain his powers. Merlin soon disappears, but only after affirming the importance of Excalibur and the work they do.

Firsts and Other Notables
The ghost of Changeling, the shapeshifting villain-turned-hero who died in Professor Xavier's place all the way back in X-Men #42 (though we didn't learn it was really Changeling who died until issue #65) is responsible for the titular possession of this issue, taking control of Meggan in an attempt to return to the land of the living. 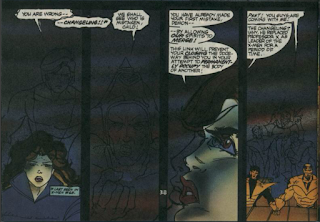 He seems to backpedal on the whole "trying to make amends and dying a hero" thing, but Alan Davis, who apparently really disliked this story, will retcon it all away eventually, saying everything here happened in Alistaire Stuart's head.

Poor dead Doug Ramsey also appears briefly as a ghost, as does Jackdaw, a supporting character from Captain Britain's solo series, and Mickey, a kid who died when Captain Britain first met Meggan. 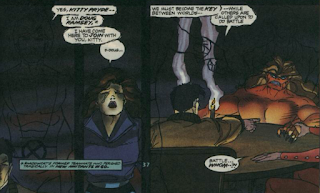 Alistaire Stuart is suddenly answering to a Mister Kaplan at WHO headquarters, even though his sister Alysande is supposed to be in charge of that organization, and we've never seen this Kaplan before. But, of course, this is all retconned away, so whatevs. 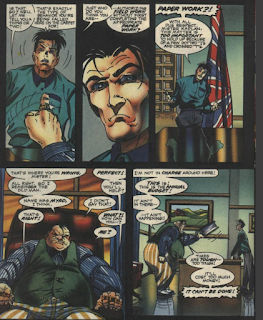 Excalibur takes the possessed Meggan to Myrd, an amnesiac man with long white hair and a beard with mystical knowledge who is totally not Merlin but that turns out to be Merlin.

The issue ends with Excalibur posing for the readers, with Merlin, Roma and (presumably) King Arthur looking down on them, in a clear echo of the end of their original debut one-shot. 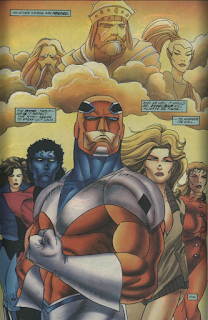 A double-sized issue, either this or Excalibur: Air Apparent is probably intended to serve as Excalibur's 1991 annual (since, like Wolverine, the series just does a standalone double-sized "special" issue in lieu of a numbered annual at this point), but I have no idea which should considered the annual and which is just a random one-shot (not that such a distinction really matters).

A Work in Progress
Despite Higgins' having written these characters before, everybody seems mildly out-of-character, especially Kitty, who speaks in mostly generic dialogue and sounds nothing like herself. But, again, none of this actually happened!

Visiting Braddock Manor, Excalibur meets Emma, the housekeeper of the estate, though she doesn't seem to recognize Kitty, despite having tended to her when Kitty landed back on Earth during "The Cross-Time Caper" in issue #19.

Though unnamed in this issue, Excalibur uses Mastermind, the computer built by Captain Britain's father, which featured in Cap's UK solo stories (though, as Alan Davis will later point out, it was very different in those issues). 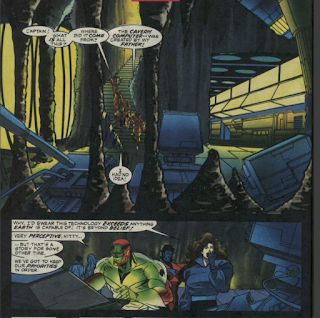 Changeling's actions are said to be made possible by the "recreation" of the Book of Darkhold, a reference to a Dr. Strange story (specifically issue #18, per the footnote). 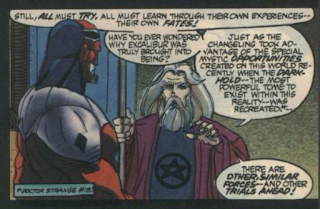 Artistic Achievements
Much like Darkoth's purple-on-black dialogue in issues #38 & #39, the outlines of the ghosts on black panels are really muddy and difficult to make out this issue.

Teebore's Take
What an odd issue. On the one hand, it seems, by the end, to be an attempt to restate Excalibur's purpose, (presumably) intentionally-echoing the end of the prestige format one-shot that launched the team, with its callbacks to Arthurian mythology. On the other hand, it never really states what that purpose is in anything but the vaguest of terms (they'll...help people...and also, Merlin?), because Excalibur, as a whole, is a fairly direction-less series at this point in time. It's written by fill-in writer Michael Higgins who seems an odd choice to be making re-declarations of purpose. On the other hand, though fill-in they may be, Higgins has logged the most issues of this series as writer outside of Claremont and Lobdell, so he's probably as qualified as any.

Most odd of all, though, is that this issue, which starts in a very supernatural bent, ties heavily in to Captain Britain's solo series and the Arthurian mythology present therein, and ultimately tries to reaffirm Excalibur's purpose, features as its villain the ghost of Changeling. I mean, I'm a bigger fan than most of mining the Silver Age X-Men for story ideas, but this is just bizarre. Changeling has no connection to any members of Excalibur, or Arthurian mythology (Marvel's or otherwise), or England. He only seems to be involved because Higgins wanted to tease the idea of Excalibur dealing with the ghost of an X-Man, which is an absurd idea anyways because at this point, we're already well past the point where Excalibur should even still think the X-Men are dead.

Kudos for the deep cut of X-Men history, I guess, and for being not as as terrible as Weird War III. But that's clearing a very, very low bar, and this is otherwise yet another forgettable Excalibur oneshot that is in no way worth the extra couple bucks charged for it. In general, I'm not a fan of creators coming in and retconning away the entirety of another creator's story in one off-hand fell swoop, but I can't really blame Davis for doing that with this issue.