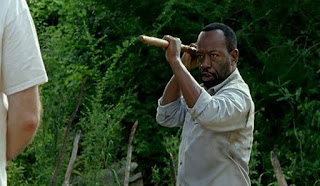 Can complete and total pacifism work in a zombie apocalypse? Is everyone worthy of life? Can pretending to be Donatello cure you of insanity?

The episode starts with Morgan talking to “someone” and begins to describe how he became the man he is now. We flashback to Morgan leaving the town where he “cleared” zombies. He sets up a camp in the woods where he will clear zombies.

Soon enough Morgan meets a man named Eastman and his goat whose milk Eastman would like to make into cheese. Us viewers know that after this story Morgan was wandering on his own. We also know that this show is The Walking Dead. So the entire episode has an air of inevitability as far as the fate of Eastman and his pet goat are concerned.

Anyway, Eastman takes his cue from The Eagles and locks Morgan in a cell in Eastman's cabin. Unbeknownst to Morgan, the cell door is unlocked. “Often times it happens that we live our lives in chains and never even know we have the key.”

Eastman is a psychologist (psychiatrist?) and attempts to help Morgan. Eastman eventually becomes Morgan's mentor and, with the help of aikido (pacifist staff wielding), Eastman brings Morgan from the brink of insanity.

So, Eastman and Morgan pal around and meditate. Two pacifist, vegetarians living in the zombie apocalypse. Naturally, this can't stand for long in The Walking Dead, so Morgan freezes when a zombie he was responsible for creating attacks and Eastman, of course, can't save Morgan from the zombie without martyring himself. That's what mentors in the hero's journey are supposed to do!

I suppose that bring up the question of how The Walking Dead view Morgan. Is he a hero? Or is will he a misguided man with a flawed perspective on life? Somebody Rick and Carol need to change?

Now, I lean towards pacifism personally, but even I recognize the need to kill in the zombie apocalypse. But I think someone who has a life philosophy against killing and refuses to do so no matter how tempting it is to break that code could be an interesting hero to watch. Hell, it worked for Trigun. But that working on The Walking Dead will all depend on how much the writers of The Walking Dead respect this philosophy. If they do then the struggles Morgan will go through to adhere to this philosophy could be fascinating (and frustrating on occasion) but if the writers just view this philosophy as silly idealism that needs to be mocked and then destroyed then this plot line will only serve to infuriate me.

Morgan is very adept at survival for, reasons? Like, where did he learn how to purify water?

When Morgan first heard the goat squeal I figured he'd let the goat get eaten. To my surprise, Morgan saved the goat but, well, we all knew he was just delaying the inevitable.

I'm not a big fan of burying people when there's an apocalypse afoot but if it helps you find peace I get it. Just so long as it's not actively putting you in danger or using up valuable resources.

The real crux of this episode is what happened between Eastman and Crighton Dallas Wilton. Crighton callously and maliciously killed Eastman's family. So Eastman tortured and kill Crighton. Eastman didn't find the peace he was looking for. It's an interesting look at how murder for the sake of revenge may not be the salve people desperately seek. However, none of this addresses killing when a person a is too dangerous to keep alive, resources are scarce and guarded prisons aren't a realistic option.

Was the Wolf Morgan was holding captive bit by a zombie or just cut?

I love pacifism in general and have a soft spot for bad ass pacifists but not killing at all is pretty difficult during an apocalypse. You can't waste your own resources on people are psychotically hell bent on killing you.

As I said above, I like Morgan and all, but I'm not sure this needed to be a ninety minute episode. Heck, we didn't even need a whole sixty minute episode for this story. It could've been done in flashback form while still moving the current plot forward and still could've been effective. Making this episode ninety minutes felt self congratulatory and put artificial gravitas to an episode that, while good, really didn't warrant the added time.
Newer Post Older Post Home
Posted by Dr. Bitz at 1:10 AM