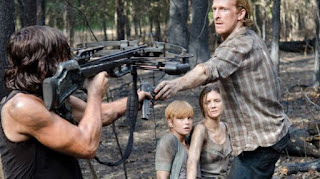 Zombies aren’t the enemy. People are. That theme is a well worn path for The Walking Dead. Heck, even if that theme was new to The Walking Dead it still would feel unoriginal because “we have met the enemy, and they are us” has already been done to death in other fiction.

Now, just because something is unoriginal doesn’t make it bad. And, frankly, a long form story about zombies needs a splash of human villains to keep things fresh. Sure, I would like it if there was more focus on the struggle of people trying to keep zombies at bay whilst rebuilding society however even I must acknowledge that adding some antagonists with actual personality can really spice things up.

But boy oh boy, we’re really piling on the human enemies this season.

Before "Always Accountable" we thought we already encountered our human antagonists for the season, The Wolves. (Have they been officially named yet? They're the weird barbaric, anarchistic maniacs that hate guns.) We also have the Alexandrians who may not try to be antagonists but become so due to their ineptness. Oh, and of course let's not forget that evil hippy, peacenik Morgan! He might be the most villainous The Walking Dead antagonist of them all! (And that's just this season, previous seasons have given us human antagonists like Woodbury and the Governor, the Claimers, Terminus, etc.)

Now we’re introduced to even more human antagonists! As Daryl, Abraham and Sasha are luring the zombie horde to...somewhere...they get attacked by the new human antagonists. (At least, I think these people aren't the Wolves...I have a hard time keeping these things straight.) Daryl is separated from Abraham and Sasha and, eventually, gets attacked and subdued by three people who, I think, are separate from the Wolves and the recent attackers. At least, I think I'm keeping things straight.

Anyway, Daryl may have been kidnapped but Daryl is Daryl so he escapes. In escaping Daryl took supplies from the kidnappers. Unfortunately, after his escape he sees that he stole (presumably needed) insulin from the kidnappers. Daryl executes a trade with the insulin for the kidnappers' gun and (in a move I found more hilarious than I should have) Daryl also scored a random wood carving.

This is where Daryl and the kidnappers would part however the people-who-attacked-Daryl, Abraham and Sasha-but-are-not-the-Wolves showed up. These attackers are looking for the kidnappers but what they didn't count on was Daryl being with them. There's no real confrontation, per se, but Daryl does help the kidnappers hide and lures one of the attackers into a zombie bite. Which was pretty bad ass.

Daryl and the kidnappers are now chummier and start traveling together. This leads them to a green house where one of the female kidnappers comes across the corpses of people she once knew. Now, I'm not sure how this woman survived the zombie apocalypse this long but, however it was, it wasn't due to intelligence. Somehow she never learned the lesson to be careful around dead bodies and, after the corpses spring to life surprising her, she ends up getting bit. We were introduced to three new characters this episode but we knew they weren't ALL surviving the entire episode.

After burying the newly dead kidnapper Daryl and the remaining two make their way back to Daryl's motorcycle. Daryl takes a liking to them and offers to bring them to Alexandria. It seems like they're agreeable to it but instead they steal Daryl's motorcycle and leave him high and dry. Even more human antagonists to add to the mix. Yay!

Other Thoughts:
I'm assuming the kidnappers were legitimately trying to run away from those attackers. This wasn't some kind of con, right?

Abraham and Sasha were doing stuff too. It was mostly a lot of talking and I was bored by them. I think the take away is Abraham found his will to live again but what's really important is he ended up with a rocket launcher!

Also, it seems like Abraham and Sasha may be hooking up. What happened to Rosita?

How readily available would insulin be in the zombie apocalypse? I assume nobody is making more. I wonder how long insulin lasts.

The kidnappers talked about actually trying to stem the tide of zombies, fighting them and hoping to one day defeat them. That's something I wouldn't have mind seeing.

Daryl has lost his motorcycle and crossbow. This is wholly unacceptable.
Newer Post Older Post Home
Posted by Dr. Bitz at 2:20 AM