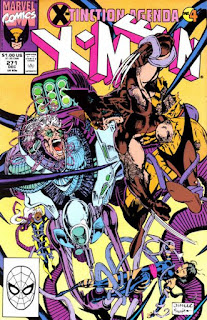 In a Nutshell
Wolverine, Jubilee and Psylocke join the fight in Genosha.

Plot
In Genosha, Rictor & Boom-Boom are rescued from a group of Magistrates by Wolverine, Jubilee & Psylocke. After Psylocke reads the New Mutants' minds to find out the details of the situation, the group splits up, with Wolverine and Psylocke to infiltrate the Citadel and rescue Storm & Rahne while Jubilee helps get the powerless (and disgruntled) Rictor and Boom-Boom to safety. Meanwhile, the Genegineer appears on a televised debate with Moira MacTaggert, and afterwards, he's attacked in his office by Storm, who plans to kill him. The Genegineer insists that Hodge is her enemy, not him,  just as Hodge arrives and saves the Genegineer, demanding that he immediately begin the Mutate transformation process on Storm. 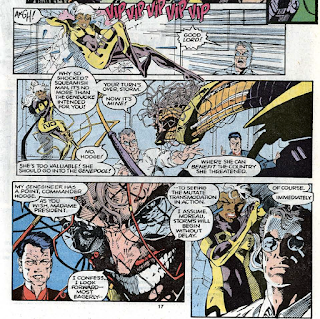 Meanwhile, Wolverine and Psylocke, using gear appropriated from the Magistrates they attacked, approach the Citadel. But when Storm's transformation begins, the psychic backlash weakens Psylocke. Wolverine plays it off as the result of a psychic mutant attack, but when Havok sees them and recognizes their gear, he immediately calls them out as imposter. He attacks Wolverine, but Psylocke recovers enough to use her psychic knife on Havok. Tracking down Storm, the pair are confronted by Hodge, who manages to subdue and capture them just as the Genegineer finishes Storm's transformation and she emerges, no longer Storm, but Mutate #20.

Firsts and Other Notables
By issue's end, Storm is transformed into a Mutate at the hands of the Genegineer, though it's hinted that he altered the process somehow for her (using a "custom configuration", according to one of his monitors, during the process), a tease that will be paid off later in the story. 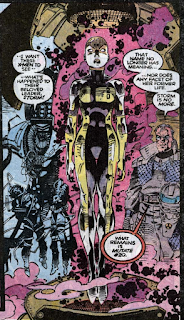 This issue features the first (and then shortly thereafter, second) instance of Psylocke describing her psychic knife as "the focused totality of my psychic powers". One of the more infamous (and widely mocked) Claremontisms, she had danced around the phrase in earlier issues, but this is the first time that exact wording (which will be repeated in future issues) is used.

As of this issue, Wolverine is aware that Rictor and Boom-Boom are New Mutants, even though they joined the team well after the X-Men cut ties with the New Mutants (and really, even after the X-Men lost the ability to monitor their activities from afar), which brings up an interesting facet of this crossover: as much as it's about bringing the X-teams together for the first time and putting to bed the whole "X-Men are dead" ruse, much of that occurs off panel/between issues: here, Wolverine is somehow aware of the current New Mutants roster, while the New Mutants aren't at all shocked that Wolverine is alive (granted, they've been hanging out with Storm, who likely explained the ruse to them, but it would have been nice to see that. At the same time, even though Storm can fill everyone in on the post-"Fall of the Mutants" setup, she herself as no clue that the Siege Perilous was used nor anything about where Wolverine is, whether he's alive or dead, etc.). There's several moments like this throughout the story, as character introductions and reunions pass by mostly without comment, which is a shame, given just how long the books have been separated prior to this. 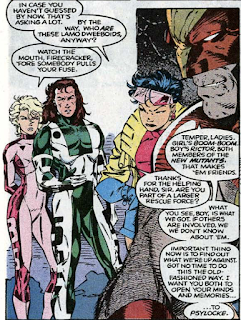 Moira participates in an on-air debate with the Genegineer this issue, and even he can tell that she's changed as Claremont keeps the Muir Island/Shadow King plot simmering. 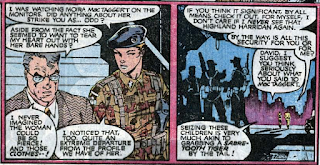 This issue introduces the Magistrate Tam, a minor recurring Genoshan figure notable for her relationship with Havok. 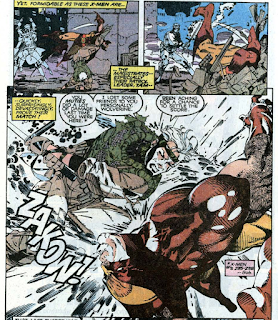 A Work in Progress
This issue once again opens with a Dramatis Personae bookending a series of panels featuring news coverage of the Genoshan situation.

In Jim Lee's hands, the Genoshan President now looks like, you know, a normal human woman, rather than the grotesquerie she was via Bogdanove in X-Factor.

Manoli Wetherell, camerawoman to Neal Conan during "Fall of the Mutants", is now a reporter for NPR.

The Genegineer expresses his concerns to Chief Magistrate Anderson that Hodge doesn't have the best interests of Genosha at heart, and later confirms that it was Hodge who ordered the attack on the X-Mansion in X-Men #270.

Claremontisms
Psylocke is described as being "literal poetry in motion", and I'm not even sure what that means. What does literal poetic motion even look like?

The Best There is at What He Does
Continuing the "Wolverine has lost a step" subplot, he is visibly weak after the fight with the Magistrates, prompting concern from Jubilee. 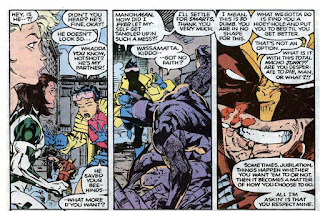 Psylocke asks Wolverine about the origins of his claws, and he responds simply that one day he didn't have them, the next day he did. 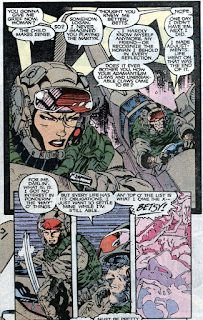 For Sale
This issue features a two page spread for the Marvel Universe Series I trading cards. 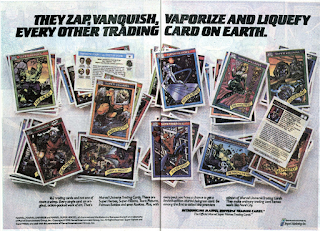 Wash the Goomba guts out of your hair with Super Mario Bros. shampoo! 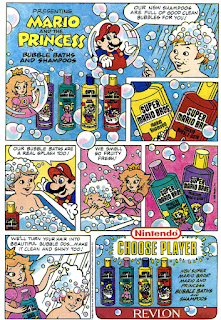 Teebore's Take
This issue welcomes Wolverine, Jubilee and Psylocke into the Genoshan fray, and in doing so, brings the trio the closest yet to an outright reunion with their remaining scattered teammates. Continuing the storyline's ability to keep a tight focus on specific characters even while unfolding the larger narrative, this also reads of a piece with the earlier Wolverine/Jubilee/Psylocke stories in issues #261 and #268, despite being Part 4 of "X-Tinction Agenda". Boom-Boom and Rictor are featured, of course, but the focus remains on the three newly-arrived X-Men, as well as on Storm. All together, the focus on the four X-Men also continues the crossover's tendency to shift the character spotlight from chapter to chapter so that the characters featured in a given chapter are usually the stars of the series in which the chapter is unfolding (so X-Men is focused on X-Men, big things happen to New Mutants in the New Mutants chapters, etc.). It's not quite on the level of being able to read only one third of the storyline and not be entirely lost, but it is relatively close, and thus far, ensures that anyone who might only be reading one or two of the series will, at the very least, see the characters they care most about in the given chapter they're reading. Which is a tricky balancing act to pull off in a crossover, especially one as formally structured as this.

Next Issue
Tomorrow, Hodge captures some more mutants in New Mutants #96. Friday, the combined X-teams strike back in X-Factor #61. Next week, Excalibur guest stars in Thor #427-429.