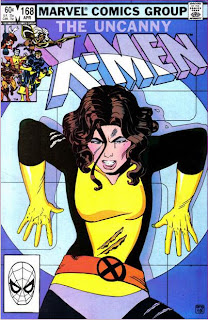 In a Nutshell
Kitty lobbies for her place on the X-Men.

Plot
As Kitty and Illyana walk to dance class, Kitty rails against Professor Xavier's decision to demote her to the New Mutants. At the mansion, Wolverine and Nightcrawler discuss Xavier's decision as Wolverine packs for a vacation to Canada, while in the Danger Room, Professor X continues his physical therapy with Lilandra's help. At dance class, Stevie Hunter convinces a still-angry Kitty to fight for her place on the team. That night, Storm attempts to reconnect with nature, but finds her recent experiences have damaged her rapport with nature. As Christmas draws near, Kitty does her best to convince Professor X she belongs on the X-Men. In Florida, Cyclops reconnects with Lee Forrester while Nightcrawler does the same with Amanda Sefton in New York. The next day, Kitty is running a scan of the mansion when she notices an anomaly in a maintenance tunnel.

Investigating, she is attacked by a nest of Sidrian Hunters, but manages to hold her own with the help of the purple dragon she befriended on the Brood homeworld. As Kitty introduces Professor X to the dragon, whom she's named Lockheed, Professor X tells Kitty he's impressed by how she handled herself, and agrees to let her rejoin the X-Men so long as it doesn't interfere with her education and training. Meanwhile, Cyclops arrives in Alaska with his dad and brother to meet his grandparents. He is stunned to meet their pilot, Madelyne Pryor, a woman who looks just like Jean Grey.

Firsts and Other Notables
This issue marks the first appearance of Madelyne "Maddie" Pryor. Meant to be a dead ringer for Jean Grey (hence the Summers family's shock at her appearance) this isn't made clear for a few issues, as lookalikes are difficult to pull off in comics, especially with characters who are generally drawn indistinctly by multiple artists across numerous issues (Jean's defining visual characteristic is her red hair, but it isn't like we're supposed to assume every redhead looks like Jean, just this one). Though little of it was intended at the time of her creation, Maddie will eventually be the recipient of one of comics' more convoluted back-stories, and become a significant character in the book off and on for the next seventy-five issues or so.

Lockheed the dragon returns in this issue, as we learn he tagged along when the X-Men left the Brood home world. Kitty more or less adopts him, and he becomes her companion from this point forward.

Kitty tussles with a nest of Sidrian Hunters, left over from their attack on the mansion in issue #154 (erronesouly cited as issue #155 in this issue), suggesting that at least some of the subbasement levels of the new X-Mansion are left from the original and weren't completely destroyed. 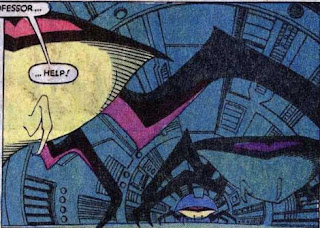 Kitty's demotion to the New Mutants ends this issue, as she's returned to the X-Men on a probationary basis after impressing Professor X with her handling of the Sidrian Hunters.

A Work in Progress
Kitty refers to the New Mutants as the X-Babies, a derogatory nickname that will stick with the team.  She also wears the standard X-Men uniform, now considered the New Mutants' uniform, and chafes at having to wear it, even though the personalized costume she wore throughout the Brood Saga wasn't all that different.

As the issue begins, Illyana mentions that Kitty has been ranting about her demotion for days, something we haven't quite seen in the various one shots that take place during this period.

Wolverine is seen departing the X-Men for a vacation in the Canadian Rockies, a setup for the events of his limited series. 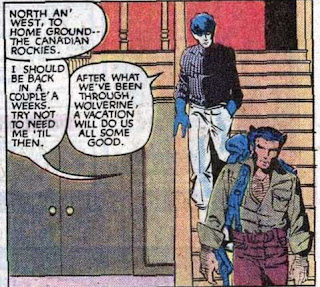 Xavier is undergoing physical therapy, and has reached a point where he can walk briefly, but with such pain that he must use all his power to keep going, setting up a conflict (walking vs. helping the X-Men) that never quite materializes.

Lilandra tells Xavier that once he is well, she will return to Shi'ar space and attempt to reclaim her throne, as she is not willing to subject her people to Deathbird's mad rule. Both Xavier and Lilandra entreat the other to join them, but neither is willing to give up their responsibilities. Xavier mentions that the last time he left Earth to be with Lilandra, it resulted in Jean's death, something he blames himself and not Lilandra for. 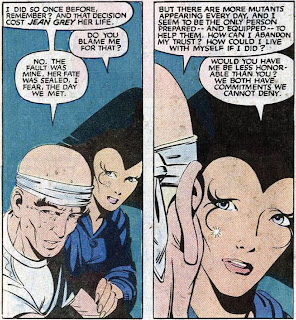 Storm attempts to commune with nature, but is rebuffed. 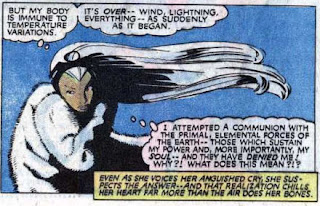 It hasn't been mentioned much, but we're reminded that Kitty is a genius.

Kitty learns she can phase objects along with her in this issue.

After disappearing without a word following issue #150, Lee Forrester makes her triumphant return, reuniting with Scott for one last weekend together before the two go their separate ways, with Lee not being entirely comfortable with Scott's life as an X-Man (also, Lee has apparently bought a new boat and named it the Arcadia again, in place of the one whose destruction led to Lee and Scott being stranded on Magneto's island base). 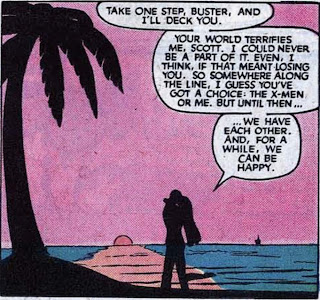 Professor X says he's never had an opportunity to see Kitty in action until her fight against the Sidri in this issue, which seems odd at first, but seems to fit: her future self was involved in the events of issues #141-142, Professor X was away from the mansion in issue #143, she didn't participate in the fight with Dr. Doom and Arcade in issue #145-147, Xavier couldn't monitor the X-Men telepathically long range in #149, Kitty was off the grounds for the battle with the Hellfire Club in issue #151-152, and Xavier was imprisoned/comatose/stuck on Earth throughout most of the Brood Saga, leaving only Kitty's actions against Magneto in issue #150 as an opportunity for Xavier to observe her in action, though he was arguably out of it/preoccupied at that time.

I Love the 80s
Again, there's a bunch of 80s stuff in Kitty and Illyana's room, including what appears to be a finished Rubik's Cube, that most 80s of items, on Kitty's desk. Kitty is also rocking a pretty 80s style jacket on the opening page of the issue (while proclaiming that Professor X is a jerk). 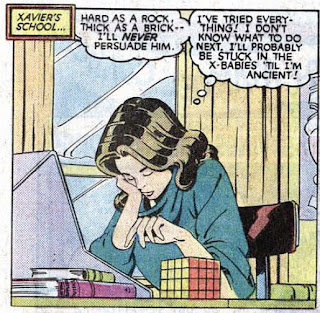 Claremontisms
Kitty tells Peter and Illyana she'll mull them some cider, something which has always struck me as being very quaint and old-fashioned (even though it's really not; I mean, people still do that, right?), similar to how the X-Men drank hot cocoa whilst recovering from Proteus' attack in issue #127. 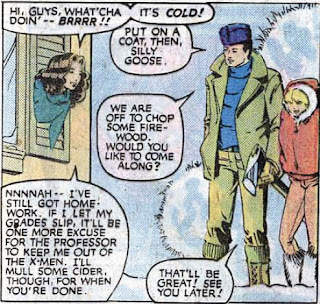 Artistic Achievements
Kitty's efforts to sway Professor X, depicted in a series of panels spread across one page, is a fantastic examples of how character and emotion can be depicted just through art; remove the captions, and you'd still know exactly how Kitty was feeling in each panel. 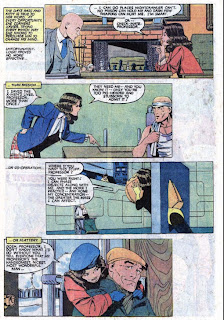 "Professor Xavier is a Jerk!"
Well, this is the issue from which this category gets its name, as Kitty bemoans Xavier demoting her to the New Mutants, though most of his arguments are pretty sound. 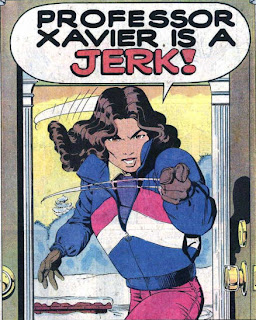 Young Love
In a nicely innuendoed panel, Nightcrawler reconnects with Amanda Sefton after his jaunt in space. 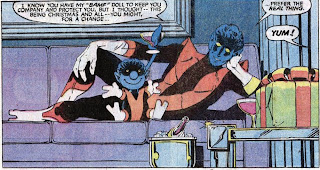 For Sale
This issue contains a full page ad for Blip, Marvel's video game magazine, something of which I was completely unaware (which I assume folded in the wake of the video game crash of '83). 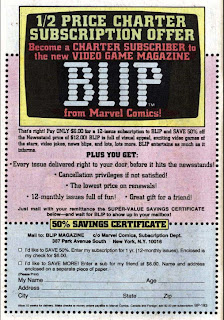 It's in the Mail
The Letter Column this issue is replaced by Kitty's Kostume Korner ("KKK?!?! That's not good...") featuring costume designs for Kitty done by fans (she'll debut yet another new costume next issue, though thankfully not one of these). 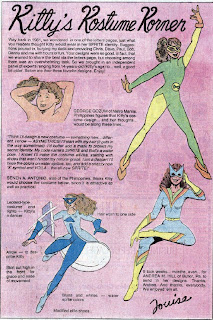 Teebore's Take
Though she is well-entrentched on the team at this point and was already a fan-favorite, I maintain that this is the issue that launched a thousand crushes on Kitty Pryde. Already responsible for saving the X-Men (and the world) on several occasions, this is really her first turn in the spotlight since issue #143's "Demon". It serves as a primer on Kitty, showcasing the various facets of her character and giving her yet another chance to shine. Her appeal is heightened by Paul Smith's depiction of her throughout the issue as well. He makes her attractive without (wisely) sexualizing her, all the while doing a marvelous job of depicting her personality. I've always more or less avoided falling into the "crushing on Kitty" trap, as her Mary Sue-ish qualities can quickly make the character insufferable, but reading this issue, it's easy to see why she entranced so many readers, especially geeky adolescent males, and it's hard to not be somewhat charmed by her.

(This issue also serves as a great example of how Claremont will approach the series as he leaves the traditional superhero structure behind, as the entirety of the issue is made up of character moments or pages advancing subplots. The focus here is on the characters' personal lives and introspections, with Kitty's fight against the Sidri the only token nod to superhero action, and even then, its significant less for the fight and more for how it resolves the conflict between Kitty and Xavier).

Next Issue
Tomorrow we look at the classic "God Loves Man Kills" in Marvel Graphic Novel #5, and meet the Morlocks in Uncanny X-Men #169.
Newer Post Older Post Home
Posted by Austin Gorton at 8:00 AM