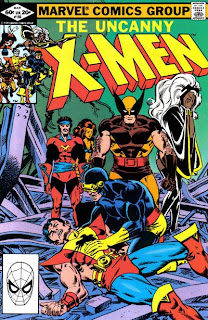 In a Nutshell
The first appearance of the Brood.

Plot
Aboard the Blackbird, Cyclops is arguing with Corsair for abandoning his children when the plane is teleported aboard a Shi'ar Dreadnought. They are shortly joined by the rest of the X-Men and are informed that Lilandra has been kidnapped and taken to Earth, and that Corsair has been implicated. Xavier uses his position as Imperial consort to delay the Shi'ar from invading Earth for 24 hours, allowing the X-Men time to locate and rescue the empress. However, Nightcrawler and Kitty are left behind on the ship as a show of good faith, with Xavier downloading all his knowledge of the Shi'ar into Kitty's brain before leaving. On Earth, the X-Men contact both the Fantastic Four and the Avengers for help, but only Avengers member Tigra is available to help. Back aboard the Shi'ar ship, Kitty tells Nightcrawler that she's been able to use her computer skills and Professor X's knowledge to tap into the ship's primary computers. On Earth, Storm is showing Corsair around New York when they are attacked by Deathbird and an alien Brood. 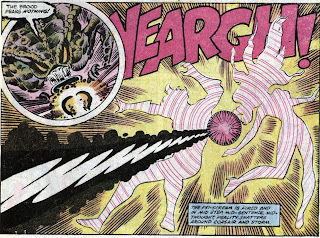 The rest of the X-Men and Tigra arrive, holding off Deathbird and the Brood, but Colossus is hit with a shell containing acid that starts eating through his armor. Storm is able to wash it away, leaving Colossus weakened but alive. As the X-Men charge into the unfinished skyscraper the Brood are using as a base, Colossus stays behind to guard Professor X. Inside, the X-Men manage to overpower the aliens, but Deathbird appears, having captured Professor X. The X-Men are forced to let her leave, and suddenly, the skyscraper collapses around them as a starship hidden inside launches into the sky. Freeing themselves from the wreckage, the X-Men find Colossus, his chest pierced by one of Deathbird's javelins and apparently dead, just as the police arrive to arrest them.

Firsts and Other Notables
The Brood, a parasitic alien race, make their first appearance. They remain a relatively minor but still significant part of the X-Men's rogues gallery.

Deathbird, after debuting in Ms. Marvel's solo title, makes her first appearance in X-Men. She will also become a significant part of the X-Men universe.

Tigra, who at the time had recently joined the Avengers, guest stars (she appears here between issues #214 and 215 of Avengers). Born of Stan Lee's desire to introduce some series that would appeal to women, Tigra first appeared as the Cat in the early 70s (in a costume/gear that would later be appropriated by fellow Avenger Patsy Walker as Hellcat, who was a supporting character in Beast's Amazing Adventures series) before being transforming into a were-tiger and bouncing around the Marvel Universe for a bit, including this stint with the Avengers. Later in the 80s she would become a mainstay of the West Coast Avengers, and nowadays is featured as an instructor in Avengers Academy.

Her appearance in this issue is largely superfluous, as she's simply the only Avenger who's home when the X-Men come calling. She helps out in the fight with Deathbird and the Brood and that's about it. I have no idea how her appearance came about. I can't imagine she was expected to generate a spike in sales; maybe Claremont just liked the character?

A Work in Progress
We learn that, in the Shi'ar language, Professor X is Shivarn'n Halanau. 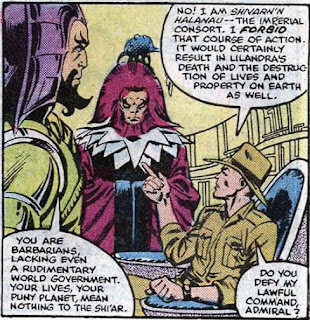 Storm is mildly resentful of Professor X turning to Cyclops before her. 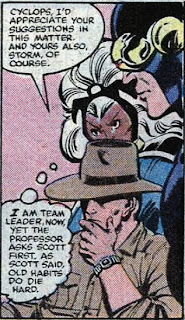 Kitty? Still spending a good chunk of the issue in a bikini. 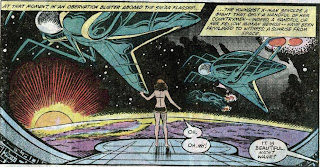 The Brood Queen is referred to as Mother-of-us-All in this issue.

By the time they charge into battle together at issue's end, Cyclops has decided that he doesn't know Corsair well enough to love him or hate him, but would like to get to know him better. 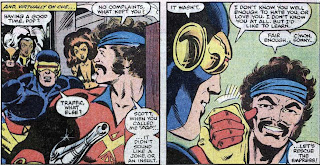 I Love the 80s
It cracks me up that in order to get in some exposition for first time readers, the admiral of the Shi'ar fleet has no idea who the X-Men are, despite their integral role in recent Shi'ar history and the fact that one of them is the consort of the Empress.

The X-Men continue that time honored tradition of going to other superheroes for help only to be told they are away on a mission, only this time, Tigra is at least at home when they come calling and pitches in (not that the Avengers were in particularly good shape at the time; at this point, the only other active members besides Tigra were Captain America, Iron Man and Thor, with Yellowjacket having been recently kicked out after slapping Wasp and building a robot to attack the Avengers that only he could defeat in order to look good). 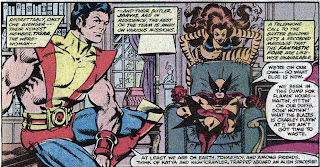 In the name of plot convenience, with the fate of the world hanging in the balance and only 24 hours to find and rescue Lilandra, Storm and Corsair split off from the rest of the X-Men in order to, essentially, go sight seeing, allowing them to be ambushed by the Brood and Deathbird (and it's terribly convenient that the X-Men manage to track them down just as they're attacked). 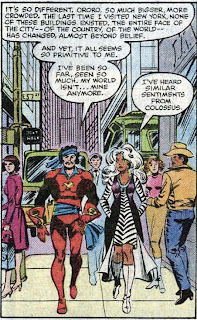 Kitty uses a Shi'ar machine to replicate a series of costumes, including Darth Vader's (the scene is also an homage to a similar one in issue #101 featuring Nightcrawler and his image inducer). 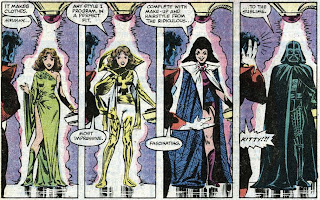 Claremontisms
More allusions to the Dark Phoenix Saga, as the issue opens with the X-Men being teleported aboard a Shi'ar ship, arriving while encircled by hostile troops and the Imperial Guard, and again later as Storm tells Corsair about Jean's death. 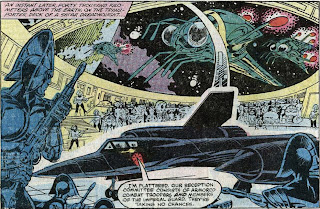 Colossus calls Storm "Wind Rider" as he succumbs to Deathbird's acid attack and believes himself to be dying, which seems an odd time to call Storm by her nickname. 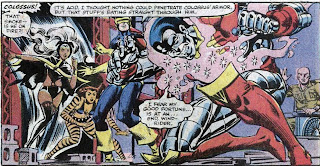 Young Love
Professor X knows Lilandra is still alive, because he would have felt her death. 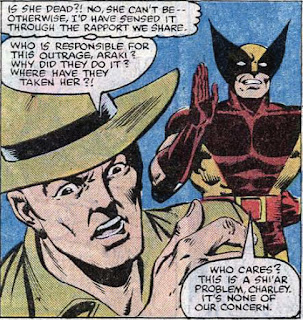 Teebore's Take
I've always remembered this issue for its cliffhanger, which has always struck me as a very obvious cliffhanger generated by the conventions of the genre. Not only because I've only ever read this story knowing Colossus survives, but you don't have to read many comics to know that when a character is seemingly killed on the closing pages of an ongoing series, chances are they'll be back somehow. But reading this issue again, I wonder if what I've always seen as a pretty genre-standard ending actually scared some readers back in the day. We're not too far removed from the "Dark Phoenix Saga", when the writer of this issue helped kill off not only a member of the X-Men but one of the Marvel Universe's oldest characters. Given thirty years of additional stories featuring Colossus, it's easy to disregard the end of this issue; but in 1982, it's entirely possible this generated more than the usual amount of angst in readers.

In the rest of the issue leading up to that cliffhanger, Claremont and Cockrum build nicely on the last issue, bringing in the rest of the X-Men and introducing the villains of the piece. While this story doesn't quite hit the transcendental synthesis of character and action that the Claremont/Byrne stories did (nor does it come close to the genre-bending "Dark Phoenix Saga" and "Days of Future Past", not that it's really trying to), it's shaping up as a quintessential Bronze Age story with fun action informed by consistent characterization featuring solid artwork. It may not be groundbreaking stuff, but the ship finally feels like its been righted.

Next Issue
More fun with Deathbird and the Brood, and the return of the Starjammers.
Newer Post Older Post Home
Posted by Austin Gorton at 10:00 AM