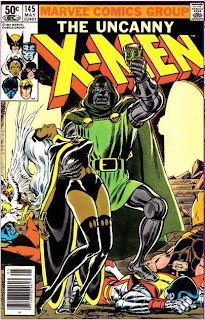 In a Nutshell
The X-Men vs. Dr. Doom

Plot
Stevie Hunter and Storm, sitting in for an ill Kitty, attend the ballet at Lincoln Center when Arcade's assistant, Miss Locke, enters their box, drugging both women. As they pass out, she explains that Dr. Doom has captured Arcade, so Miss Locke has kidnapped the X-Men's friends and family, including Moira MacTaggert, Amanda Sefton, Candy Southern, Illyana Rasputin and Jean Grey's parents, and is holding them hostage in Murderworld. If the X-Men don't free Arcade, their loved ones will die. When Storm awakens, Stevie is gone, taken by Locke, and Storm scouts the city, quickly confirming Miss Locke's claims. At the mansion, Storm informs the other X-Men of the situation and announces she has a plan. Professor X telepathically contacts former X-Men Havok, Polaris, Iceman and Banshee and asks them to return to the mansion. 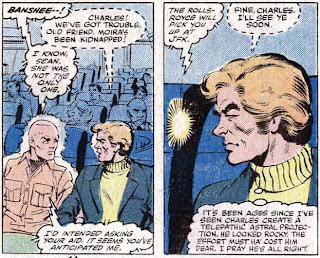 Meanwhile, in the wake of storm that capsized their boat, Cyclops and Lee Forrester awaken on a seemingly-deserted island in the Bahamas. Back at the X-Mansion, with the former X-Men in attendance, Storm announces her plan to send the reserve X-Men to Murderworld to rescue the hostages while Storm takes the rest of the team to negotiate with Dr. Doom. Arriving at Doom's castle in the Adirondack Mountains, Storm sits down to dinner with the villain while Angel, Nightcrawler, Wolverine and Colossus sneak into the castle. They reach the dungeons and find Acade's cell empty, at which point they are attacked by goons in high tech armor. Upstairs, Arcade reveals himself to Storm not as Doom's prisoner but his ally. Storm attacks, but Doom encases her in chrome. The rest of the X-Men burst in and attack Doom, but he quickly knocks them all out and stands triumphant.

Firsts and Other Notables
This issue marks Dave Cockrum's return as regular penciller of the book, meaning that, for some time to come, X-Men has remarkably had only two regular pencillers in its post-reprint history.

Arcade returns, alongside Dr. Doom, arguably Marvel's greatest villain (and arguably superhero comics' greatest villain), though John Byrne, who left X-Men to write and draw Fantastic Four, was so bothered by Claremont's use of Doom in this story that in an issue of FF he retconned Doom's appearance in this story to be a faulty Doombot instead of the real Doom. You can read more about it here. 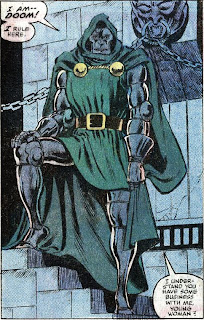 This issue functions as a reunion of sorts for the old X-Men, as the original team appears in one form or another throughout, with Angel an active member of the team, Havok, Polaris and Iceman (his first appearance in the book, sans his silent cameo in issue #138, since #94) returning to help form the second squad of X-Men, Beast appearing via monitor as Xavier asks him for information about Dr. Doom, Cyclops popping up in a subplot, and Jean appearing via the holoempathic matrix crystal Lilandra gave her parents.

Colossus' younger sister Illyana is amongst the hostages taken by Arcade, marking the beginning of her increased presence in the book and her tenure as one of the significant X-Men characters of the 80s.

Kitty is sidelined by the flu throughout this story. Dave Cockrum has said he wasn't a fan of the character initially, and didn't know how to use her, so he had her taken out of the picture until he could get a handle on her. Before long, it becomes clear that he works things out and Kitty becomes one of his favorite characters on the team.

A Work in Progress
If you wanted to read any sexual tension into Stevie Hunter and Storm's relationship, this panel is a good place to start.

Claremont, to his credit, at least addresses the fact that kidnapping Amanda Sefton should be difficult considering she's a powerful sorceress.

Amanda has what will come to be known as a "Bamf" doll. 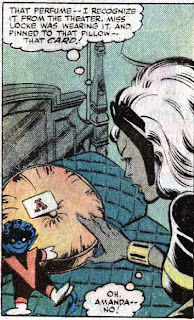 Banshee, to his credit, is already en route to the mansion, Moira having been kidnapped, when Professor X contacts him for help. Though perhaps a phone call prior to boarding the plane would have been a good idea, as it might have alerted the X-Men to the threat sooner (also, Professor X mentally appears seated next to Banshee on the plane, just as he appeared seated next to him in a theater when he recruited him for the team in Giant Size X-Men #1).

Professor X mentions a shift in the magnetic field of the planet that makes long-range telepathic contact difficult, likely the work of Magneto. 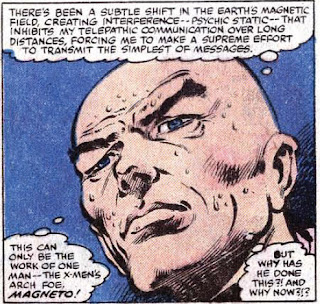 Professor X declines Beast's offer of the Avengers help, preferring to keep the matter "in the family", which is a pretty lame excuse for not bringing in Earth's Mightiest Heroes, but I can appreciate that Claremont took the time to explain why the Avengers aren't helping out.

Colossus is wearing what I believe is supposed to be a sweatshirt with an X-Men logo on it, the first appearance of such logo-ed clothing that isn't part of their superhero attire, and a precursor to the 90s leather X-Men jackets. 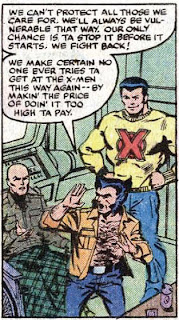 Despite last being seen living on Muir Island, Havok and Polaris are back to living in the southwest when Xavier calls for help.

Havok is put in charge of the reserve X-Men team, the first indication of his own leadership skills.

Dr. Doom, currently ousted as monarch of Latveria and trying to reclaim his throne, is operating out of his castle in the Adirondack mountains which, I believe, first appeared in an early issue of Amazing Spider-Man (to explain why the New York bound Spidey was tussling with the European monarch) and, according to a helpful caption, was recently turned into an amusement park by Toad in an issue of Marvel Two-in-One. 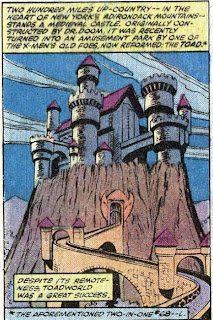 Cyclops refers to Lee Forester as "Al" throughout this issue; while that's certainly short for her given name of Aleytys, it's the only time he refers to her as such. Seems like Claremont pulled a Stan Lee and forgot which nickname he was using. 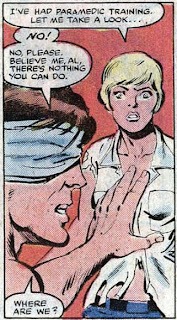 I Love the 80s
Bobby's dorm room is filled with great pop culture references for the time. Also, he is a college sophomore who, in a neat bit, uses his power to chill a beer. I'm not sure what the drinking age in 1981 in whatever state Bobby's in was, but it was either lower than 21, or Bobby, like many college kids, is drinking illicitly. 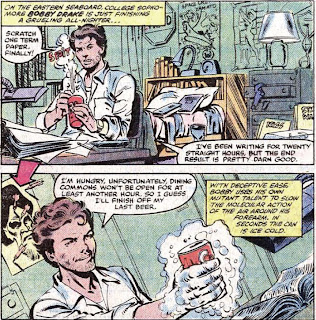 It's never quite clear how Arcade knows enough about the X-Men to know who their family and friends are for the sake of taking hostages. None of the X-Men are terribly protective of secret identities, but it isn't like they've told Arcade their real names or anything. Moira's kidnapping makes sense, as does Candy's (Angel's ID is public) and Amanda Sefton (whom Arcade kidnapped the last time out, recognizing her as Nightcrawler's girlfriend) and Stevie is a victim of proximity. But how does Arcade know who Colossus' little sister is (and then, why not also kidnap his parents), or who the parents of Jean Grey, a deceased member of the team whom he's never faced, are?

Claremontisms
Doom finds himself attracted to Storm, and she to him, beginning a trend in which a villain is attracted to Storm and Storm, despite her better judgment, shares the attraction (first suggested back in Annual #3, with Arkon). 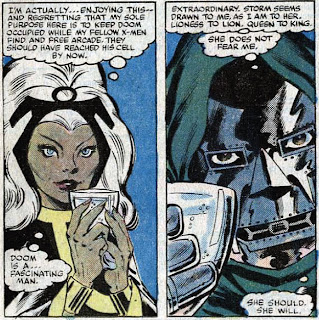 The Awesome and Terrible Power of Cyclops
Shipwrecked and without his visor or glasses, Cyclops fashions a blindfold to keep his eyes shut and, not wanting Lee to know he's a mutant, tells her he's injured his eyes.

For Sale
Help your parents stop smoking! Or, get told to mind your own business and quit leaving your damn stickers lying around! 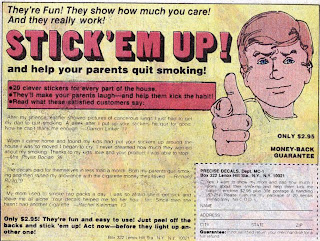 It's in the Mail
An editorial from Claremont announces that X-Men won 8 (out of 14) Eagle Awards, with Wolverine winning best character and the Proteus saga winning Favorite Continued Story. He also welcomes back Dave Cockrum, and promises Magneto around the corner and the Starjammers down the road. 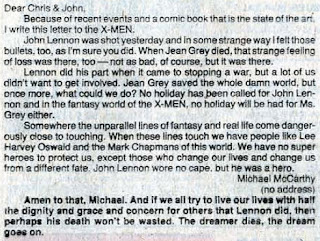 Dave Cockrum on returning to the book
"Al Milgrom had got this book going, Marvel Fanfare, and there was a Mike Golden story with Spider-Man and the Angel. I think it started out to be a [Marvel] Team-Up...And he decided he wanted to have an X-Men follow-up for that and just kind of idly he asked me if I wanted to do it, and I think I was about ready to do some more X-Men stuff and I said, "Yeah," so lo and behold, he gave me the plot, I started doing it, and not only was it easy to do, it was actually fun, as opposed to the misery of the Star Trek stuff. This was on a Saturday; I called up, I had already got ten pages of this done, and was moving right along, and I was really enjoying it, and I called up Chris and said, "You know, if Byrne ever wants to get off the book, I think I'd like to have it back." And that following Monday Byrne announced he was leaving the book. It was really strange timing, you know. So I got it. I had already put in my bid. There were no hassles, no doubts, or anything. "He's off, you got it.""

Teebore's Take
This issue marks the beginning of perhaps Claremont's most traditional super-hero story to date, pitting the X-Men against one of the classic Marvel villains. Unfortunately, unlike some of his earlier collaborations with Cockrum and Byrne, in which traditional super-heroic tropes were upended, manipulated or otherwise commented upon even while a traditional super-hero story unfolded, this story just kind of...exists. There is no subtextual commentary on the nature of the genre, very little in the way of character development, no playing around with form or function. Even Cockrum's art, while vastly different in its way from Byrne's but still possessing its own charm, lacks the energy which characterized his earlier run, as though the artist is still finding his groove, phoning it in,or largely uninspired by the material. The best thing this issue has going for it is getting to see some old characters who haven't been around much, but their story is mostly relegated to the next issue. Whether struggling in the wake of Byrne's departure or simply choosing to take a breather with a by-the-numbers story, Claremont gives us with this issue an inauspicious start to an inauspicious story.