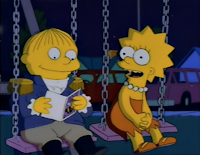 Or the One Where
Ralph Wiggum crushes on Lisa.

The Setup
After Lisa takes pity on Ralph and gives him a Valentine, he becomes enamored with her, much to Lisa's frustration.

Notable Notes
This episode established that Ralph is Chief Wiggum's son (both characters had obviously appeared before this, but this is the first time their relationship to one another was established).

This is also the first Simpsons Valentines Day episode, while also being probably the only Presidents Day episode of any show, ever. To wit, it features a fantastic original song about the mediocre US presidents. Being a colossal presidential trivia nerd, it's one of my all time favorites.

Principal Skinner's Vietnam flashback in this episode is a reference to Apocalypse Now.

Favorite Quotes
Ralph: Miss Hoover, I glued my head to my shoulder Heh.

Ralph:  ... and my doctor said I wouldn't have so many nose-bleeds if I kept my finger out of there. 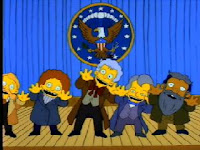 Teebore's Take
This is Ralph Wiggum's big breakout episode. One of the show's most popular supporting characters, he certainly appeared in episodes prior to this one, but this is the first episode to give him the spotlight and solidify his basic characterization as a dim but sweet simpleton (though as with most things, the "dim" part of his characterization has been grossly exaggerated in recent years, to the point of unreality; here Ralph is kinda dumb, but he can still function in the world, whereas in a later episode he's not even potty trained). While there's no doubt this is an all time classic, and that Ralph is uproariously funny throughout, I grew a bit tired of it a while back, as Ralph quickly became the favorite character of every casual Simpsons fan out there (I swear, everyone I ran into in college cited Ralph as their favorite character, and it was pretty much entirely because of this episode). I still enjoy the episode, but it's more for the sweet depiction of childhood emotions and unrequited love (and a fantastic third act celebration of the American presidents) than for the Ralph shenanigans.

Funny and sweet, this is the episode that created thousands of Ralph Wiggum fans and defined the character for decades to come. 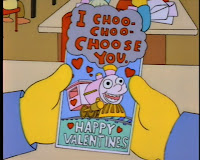