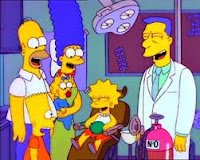 Or the One Where
Homer becomes the head of the power plant's union and takes on Mr. Burns.

The Setup
When it turns out Lisa needs braces, Homer accepts a position as head of the union in order to get back their dental plan.

Notable Notes
"Last Exit to Springfield" consistently appears at or near the top of many different "best of" lists, including Entertainment Weekly, which crowned this episode the best ever in 2003.

This episode first introduced me to the practice of "yoinking", in which one can take something from another person consequence free as long as they say "yoink" while doing so, a practice still in use amongst my friends.

Both Anthony Hopkins and Clint Eastwood turned down the role of the dentist. Anthony Perkins agreed to it, but died before the part could be recorded, so Hank Azaria stepped in to do it.

Four seasons in, we get our first joke about how Mr. Burns continually asks about Homer despite the preponderance of significant events in his life in which Homer has been involved. Here, Smithers says, "he thwarted your campaign for governor, you ran over his son, he saved the plant from meltdown, his wife painted you in the nude..." 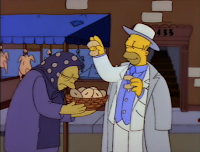 Bart: Cool! she'll be a freak!
Marge: Bart!
Bart: We can stick her in a trailer, drive around the south and charge two bits a gander.

Kent: Homer, organized labor has been called a lumbering dinosaur.
Homer: AAAAH!
Kent: Um, my director is telling me not to talk to you any more.
Homer: Woo-hoo!

Mr. Burns: Smithers, get me some strikebreakers. The kind they had in the thirties.
Grampa: We can't bust heads like we used to, but we have our ways. One trick is to tell 'em stories that don't go anywhere, like the time I caught the ferry over to Shelbyville. I needed a new heel for my shoe, so, I decided to go to Morganville, which is what they called Shelbyville in those days. So I tied an onion to my belt, which was the style at the time. Now, to take the ferry cost a nickel, and in those days, nickels had pictures of bumblebees on 'em. "Give me five bees for a quarter," you'd say. Now where were we? Oh yeah - the important thing was I had an onion on my belt, which was the style at the time. They didn't have white onions because of the war. The only thing you could get was those big yellow ones... 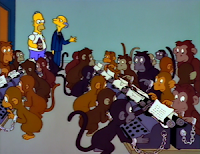 Teebore's Take
Entertainment Weekly crowned this the best episode of all time, and while there are other episodes I personally prefer over it, there's no denying this is one of the show's best episodes. It's hilarious, of course, on a number of levels, highbrow and lowbrow, but it's also bitingly satirical and pop culturally savvy, and features one of the best McBain film clips, another great original song and the "dental plan/Lisa needs braces" bit, one of the most famous and beloved Simpsons sequences. It's more or less a flawless episode, and it's frankly rather difficult to write about. To paraphrase Homer's thoughts about Readers Digest's "How to Increase Your Word Power" column, this episode is just really, really...really...good.

It also marks the end of a string of ten "5 Jebediah Head" all time classic episodes. While the remaining episodes in this season are still pretty good (including a few more 5 Head classics), and some later seasons will similarly rattle off a string of consecutive all time greats, its worth noting the end of The Simpsons first extended run of undisputed classics, and the fact that the run closes out with one of the show's greatest episodes.

I'm not about to argue with Entertainment Weekly. Simply one of the show's best. 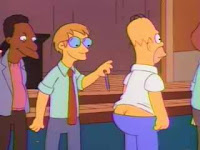