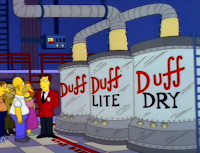 Or the One Where
Homer gives up beer for thirty days at the same time Lisa conducts an experiment to determine whether her brother is smarter than a hamster.

The Setup
Following a trip to the Duff Brewery, Homer gets a DUI, prompting Marge to ask him to give up alcohol for a month, while Bart earns himself a place in Lisa's new science project after he destroys her steroid-enhanced super tomato.

When Homer recalls his good times drinking, he sings a variation on the song "It Was a Very Good Year". Having heard it on Simpsons first, I can't help but think of Homer's version whenever I hear the real thing.

Continuity is a loose tapestry in the Simpsons universe. Case in point: Flanders says in this episode it's been 4000 days since his last drink, yet in season two's "Dead Putting Society", Flanders shared his in-house draft beer with Homer. Clearly, Flanders is becoming more of a prude, leaving behind his frustratingly-nice-but-still-relatively-normal persona from earlier seasons.

This episode is responsible for making two significant additions to my personal vernacular. First, after Lisa chuckles at an image in her head of Bart being trapped in a maze like a hamster, Marge asks her what she's laughing at. Lisa responds with, "I was just thinking of a joke I saw on Herman's Head" (the gag being that Yeardley Smith, the actress providing Lisa's voice, was also on that short-lived Fox show). To this day, when I'm amused by something inappropriate and asked what I was laughing at, I'll usually respond with, "a joke I saw on Herman's Head."

Secondly, as Mrs. Krabappel observes Milhouse's science fair project ("Behold gravity, in all it's glory!" he says, at which point a Slinky fails to walk down a board), she remarks, "pretty lame, Milhouse". That line has become an even more regular part of my vernacular, used anytime something, well, lame happens. 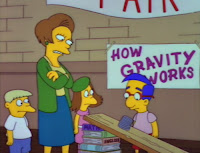 Favorite Quotes
Principal Skinner: Well Edna, for a school with no Asian kids I think we put on a pretty darn good science fair.

Marge: Homer, I want you to encourage Lisa with her science fair project.
Homer: Yeah, syrup is better than jelly.

Lisa: I've grown a futuristic tomato by fertilizing it with anabolic steroids.
Bart: The kind that help our Olympic athletes reach new peaks of excellence?
Lisa: The very same!

Lisa: I want the most intelligent hamster you've got.
Clerk: OK. Uh, this little guy writes mysteries under the name of J. D. McGregor.
Lisa: How can a hamster write mysteries?
Clerk: Well, he gets the ending first, then he writes backward.
Lisa: Aw, C'mon.
Clerk: Look, kid, just take him before his mother eats him, all right?

Lisa: Oh, oh!
Bart: Looking for something?
Lisa: What have you done with my report?
Bart: I've hidden it. To find it, you'll need to decipher a series of clues, each more fiendish --
Lisa: Got it!
Bart: D'oh! 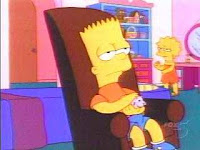 Teebore's Take
Whenever I see this episode listed amongst the other season four episodes, I recall it being a step down in quality from the episodes around it. Yet whenever I sit down and watch it again, I'm reminded that it's just as funny and well-constructed as the episodes which precede it. For the first (and really last) time, the show addresses Homer's alcohol consumption realistically, and it's a testament to the quality of the show at this time that not only does the result avoid any kind of "very special episode" feeling, but it's also very funny. The subplot is equally strong, as Lisa pits a hamster against her brother, culminating in one of those classic sitcom set pieces, the school science fair, at which Bart gets his revenge by infuriatingly beating Lisa with a less-than-scientific project. In fact, this episode is filled with great set pieces, from both the actual science fair and Bart's dream science fair that opens the episode ("I can't...stop...doing...the monkey!"), to the Duff Brewery tour, to Homer's post-brewery DUI arrest, to the vignettes of Homer's frustrated beer-free life.

A somewhat overlooked classic, this episode manages to tackle Homer's inclination for beer sincerely and humorously, resulting in another laugh-a-minute episode. It also gave the world (and me) the line "pretty lame, Milhouse". 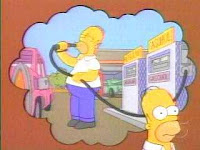