In a Nutshell
The X-Men team-up with Magneto against a televangelist's crusade against mutants.

Plot
In Connecticut, two mutant children are hunted and killed by a group of Purifiers, who string up the children's bodies on a local playground to set an example. But before morning, Magneto arrives and lays them to rest, swearing vengeance. In New York, Reverend William Stryker is briefed on the X-Men. That evening, the X-Men gather to watch Professor X debate Stryker on TV, and thanks to some clever editing, Stryker comes out looking better. As the X-Men burn off their frustrations in the Danger Room, Cyclops and Storm escort Xavier home, but are ambushed by Stryker's soldiers, the Purifiers. At the mansion, the X-Men are told their teammates died in a car accident.

The next morning, Kitty and Illyana discover monitoring equipment on the grounds while Wolverine, Nightcrawler and Colossus investigate the scene of the accident. Wolverine realizes the deaths were faked. The X-Men are attacked by more Purifiers. but are helped by the arrival of Magneto, who says he comes to them as an ally. Back at the mansion, Kitty and Illyana are captured by Purifiers sent to investigate the monitoring equipment Kitty damaged, while Magneto and Wolverine interrogate the captured Purifiers and learn about Stryker's crusade against mutants. In New York, Stryker is brainwashing Professor X as he explains to Storm and Cyclops how the birth of his mutant son led him to kill both his wife and his child and turn to God to launch a crusade against mutants. He orders the death of Kitty, but when the Purifiers stop en route to their headquarters, they discover she's escaped. The Purifiers proceed to chase Kitty throughout the city, until the X-Men respond to her call for help.

Arriving at Stryker's New York headquarters, Magneto and the X-Men rescue Cyclops, Storm and Illyana, then follow Stryker and Xavier to Madison Square Garden, where a crowd has gathered to hear Stryker's latest sermon. Stryker tells a brainwashed Xavier that he intends for Xavier to use a modified version of Cerebro to target and kill all mutants. As Stryker's vehemently anti-mutant speech begins, his psi-scan device is activated and Professor X starts attacking mutants. With Magneto serving as a distraction, the X-Men are able to get close enough to destroy the device and free Xavier, but Cyclops refuses to leave, deciding instead to engage Stryker in open debate on national TV. The X-Men do their best to sway Stryker, but he refuses to listen, though others in the crowd begin to question Stryker's crusade. When the reverend pulls a gun on Kitty, a nearby police officer fires first, shooting Stryker before he can kill the young girl. A few days later, the X-Men learn of Stryker's arraigment, though his crusade continues. Magneto offers the X-Men a place with him, and though Professor X initially thinks such a course of action might be best, Cyclops refuses to abandon Xavier's dream, arguing that they need to seek coexistence with humanity the right way, or not at all.

Firsts and Other Notables
This is the first appearance of Reverend William Stryker, a televangelist who believes that if man was created in the image of God, then mutants have been created in the image of the Devil and need to be killed, and who has launched a ministry espousing as much. Originally intended, I believe, to be a one-off character limited to this story, Claremont eventually brought Stryker back during his return to the X-books in the early 2000s, and from there, Stryker went on to become one of the chief antagonists for the New X-Men, the fourth generation of Xavier students. 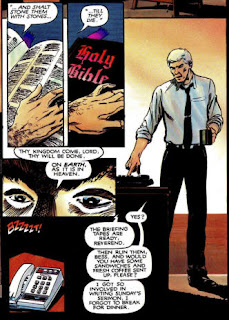 This is also the first appearance of the Purifiers, the paramilitary wing of Stryker's crusade, and they like their leader remained dormant for years before surfacing with Stryker in the last decade. They were one of the main adversaries of the X-Men during 2007's "Messiah Complex" crossover.

A good portion of this story served as the inspiration for the plot of the second X-Men film, with Stryker repositioned as a solider but the idea of his crusade coming from trauma involving his wife and child, having a mutant assistant, and using a modified Cerebro and brainwashed Professor X to target and kill mutants, as well as the idea of Magneto teaming up with the X-Men against a greater evil, all carry over into the film.

Magneto makes his first post-issue #150, post-flashback with Xavier (in terms of real time chronology) appearance, and it's another important step in his post-"one dimensional super villain" characterization, as he fights alongside the X-Men against the greater threat of Stryker and his message. In this world of rising anti-mutant sentiment, Magneto is starting to see the X-Men as allies, and while their methods and ultimate goals remain distinct, Magneto can now envision a world where he can stand with the X-Men and they could carry on his work. 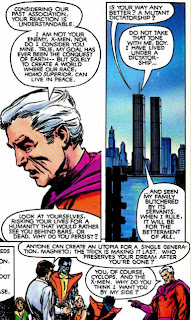 Early in the story, Kitty gets into a fight with a student over his support of Stryker and anti-mutant opinions, and when Stevie Hunter tells her they're only words, Kitty responds by asking Stevie how she'd feel if the boy had called Kitty a "nigger lover" instead of mutie lover. It's the first time (and not the last)  that Claremont makes a direct connection between the fictional racial epithet "mutie" (coined by Stan Lee back in the 60s) and a real-world racial slur. Many have criticized Claremont for making so direct a comparison (here and elsewhere) between a fictional minority and a real one, both for being pretentious and for inadvertently trivializing the racial issues in the real world, but I can't deny that reading this as a teenager, the comparison worked like gangbusters. It instantly gave me both a clear picture of what life was like for the X-Men as a minority in their world, as well as a greater appreciation for the struggles of all minorities in the real world. 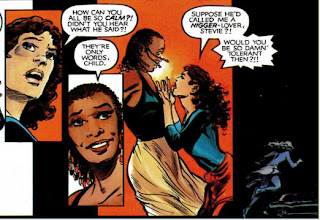 Neal Adams was originally slated to draw this issue, and it would have marked his return to the characters following his seminal run in the 60s, but he had to ultimately bow out of the project. Brent Anderson, who had filled in on a handful of previous issues of X-Men, stepped in. His work here is strong, and more similar in style to his work with Kurt Busiek on Astro City than anything we've seen before.

Kitty is referred to by her new codename of Ariel in this issue for the first time, though she appeared under that name in the first issue of The Official Handbook of the Marvel Universe, on stands the month before this issue. She's also wearing a new costume. 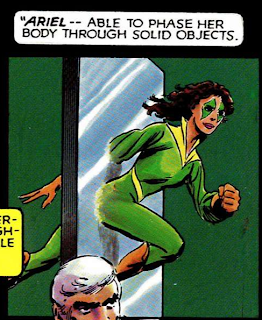 This issue is a prestige format, 64 page issue, printed on slick paper and sold for $6.95 (ten times the price of a regular comic book). It appears without the Comics Code seal of approval, and was on sale at the same time as Uncanny X-Men #166, New Mutants #1 and Special Edition X-Men #1.

A Work in Progress
The Purifiers scan of Illyana show her to be neither fully human nor mutant. 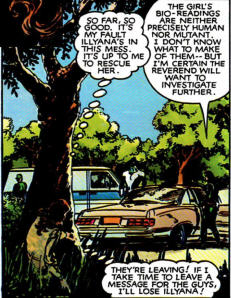 Stryker tells the X-Men that he learned about them through the files amassed by Fred Duncan, the X-Men's former ally in the FBI, files which were smuggled out of the FBI to him by agents sympathetic to his cause. 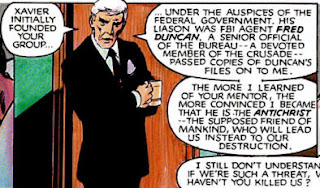 Kitty learns she can phase a person along with her in this issue. 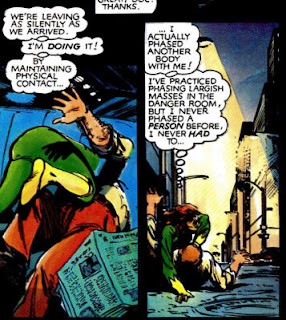 Claremontisms
Would you be surprised to know that Colossus was described as being "nigh-invulnerable" this issue? 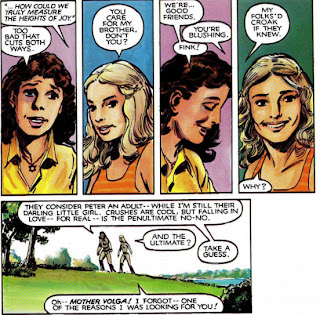 The Best There Is At What He Does
This issue contains the first instance of Wolverine threatening to unleash his "third" claw after framing a subject's face with the left and right claws, a technique that has become somewhat famous, and was featured in the first X-Men movie (in fact, I think this is the first time we've seen that Wolverine can pick and choose which claws he extends, rather than having to extend them as a group or not at all). 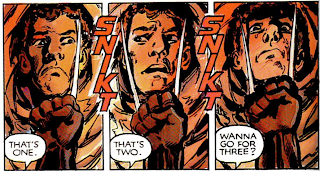 Human/Mutant Relations
This entire issue is, of course, a treatise on human/mutant relations, with Stryker and a large swath of his followers more or less declaring genocide on mutants (Magneto gives a fantastic reaction to this notion) while also depicting a handful of humans who find Stryker's teachings too extreme, including the cop who shoots Stryker to prevent him from killing Kitty. 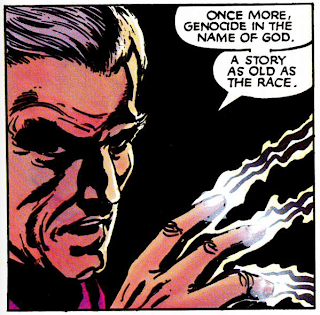 Teebore's Take
Without a doubt, this is Claremont's most in depth examination of the themes of prejudice and intolerance in X-Men since "Days of Future Past", and it's arguably his definitive statement on the matter. It's not surprising that this story served as the basis for one of the best X-Men movies; largely self-contained and isolated from the main series in terms of plot and characterization, it's the kind of story you could hand to anyone and say, "this is what the X-Men are all about". It's also one of the most adult X-Men stories, not because of the use of the N-word or the prestige format or Claremont's eye-rollingly-pretentious credit as "Christopher Claremont", but because the direct conflict is essentially resolved through an exchange of dialogue.

Stryker deploys his fair share of super-villain gadgetry (including a mock-Cerebro that targets mutants, just as in X2), but he's not a traditional super-villain, and once the X-Men have dismantled Stryker's sci fi tech, they stop punching and slicing and start talking, attempting to reason with Stryker as well as to make a point to the crowd he's gathered. Stryker, of course, cannot be swayed, but the X-Men's words don't fall on entirely deaf ears, and in that regard, they win a bigger victory than just stopping the super-villain plot du jour. But just as the problems of intolerance, prejudice and persecution can't be blasted away, they can't entirely be talked away either, and the story ends with plenty of people still buying what Stryker is selling. The important thing is that the X-Men changed some minds, and reaffirmed for themselves their goals and methods - the solution lies not in conquest, or separation, or open rebellion, but through leading by example and the honest exchange of ideas.

Next Issue
On Wednesday, the X-Men venture into the sewers in Uncanny X-Men #169, and on Thursday, we catch back up with the New Mutants in New Mutants #4.
Newer Post Older Post Home
Posted by Austin Gorton at 8:00 AM