Retro Review: So It's Come To This: A Simpsons Clip Show 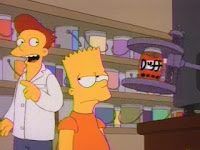 Or the One Where
With Homer in the hospital, the Simpsons recall past episodes...of their lives.

The Setup
After Homer continually pranks Bart on April Fools Day, Bart gets him back by shaking up a can of beer in a paint mixer, causing an explosion that lands Homer in the hospital.

Notable Notes
The clips in this episode are culled from seasons 1-3. One of the clips features a montage of Homer saying "d'oh!" 32 different times.

The clip of Homer falling back down Springfield Gorge after the ambulance he's in hits a tree (from "Bart the Daredevil") was cut from the original episode; it appears here for the first time.

Bart: Got to fool him before the day is out, but how? He must have a weakness.
Homer: Ah, beer. My one weakness. My Achilles' Heel, if you will.
Bart: Beer! Beer is the cheese!

TV: The following is a public service announcement. Excessive alcohol consumption can cause liver damage and cancer of the rectum.
Homer: Mmmmm... beer...

Eddie: That sounded like an explosion at the old Simpson place.
Wiggum: Forget it. That's two blocks away.
Eddie: Looks like there's beer coming out of the chimney!
Wiggum: I am proceeding on foot. Call in a Code 8.
Eddie: [into radio] We need pretzels. Repeat, pretzels. 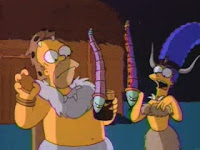 Teebore's Take
As clip shows go, this is definitely the best of The Simpsons various pure clip shows (and arguably the best genuine clip show of any show); it features far more original material than most clip shows, and it's a testament to the quality of the show at the time that they manage to pack as much strong material into an act-and-a-half. But it's still a clip show, and there's only so much lipstick you can put on a pig. Looking at it now, with twenty-odd seasons under their belt, season 4 seems like an early time to cave in and do a clip show (something The Simpsons did occasionally in their earlier years to give their staff a break, not that the practice was limited to this show by any means), but this is the 77th episode of the show, and for most other shows, four seasons and 77 episodes is a good long run. It's hard to imagine The Simpsons (or Family Guy, or really any show) getting away with something like this nowadays (the last Simpsons clip show, season thirteen's "Gump Roast", aired ten years ago), but it was a pretty standard device back in the day, and in this case, at least, The Simpsons makes the most out of a time-and-money saving TV tradition.

It may be the best of the clip shows, but it's still just a clip show. 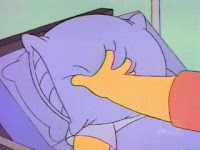