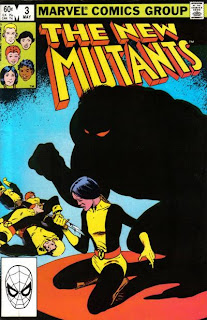 In a Nutshell
The New Mutants come face to face with one of the Brood.

Plot
Dani is haunted at night by visions of the Brood, the Demon Bear which killed her parents, and her dead teammates, though when she wakes up, she discovers the knife she used to attack the bear in her dream has blood on it. When she goes to tell this to Professor X, she overhears him talking with Moira MacTaggert, saying he believes Dani may be suffering from extreme paranoid schizophrenia. Despondent, Dani contemplates whether she should even go on living. On Muir Isle, Moira hangs up with Xavier, frustrated he hasn't used his telepathy to accurately diagnose Dani's condition. Banshee comforts her, even going so far as to propose to her, but Moira turns him down. The next morning, Banshee finds Illyana singing a song to the rising sun, as though she's praying. He believes she is honoring the missing X-Men, but she is really singing for the X-Men she saw killed while growing up in Limbo. Back at the mansion, Dani discusses her situation with her teammates, all of whom believe her. Suddenly, as the landscape around them turns alien, they are attacked by a Brood Queen. 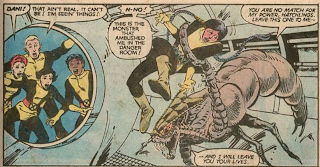 The Brood Queen captures Dani, knocking her unconscious. When Dani awakens, she realizes the Brood Queen is using Dani's own power against her, and the Brood Queen explains she is augmenting Dani's power to its full potential, making her visions real. Just then the rest of the New Mutants find Dani, and Dani orders Sam to knock her unconscious. Once he does, the Brood Queen disappears and everything returns to normal. That night, Dani contemplates leaving the team, worried that the Brood could once more use her power against her friends, but Roberto tells her they are teammates and friends now, and they'll stick together. Dani worries that Professor X might be under the alien's control, not realizing that the Brood Queen is gestating inside Xavier and had been using his telepathy to control and augment her power. The New Mutants settle in to watch Magnum, P.I., unaware that the X-Men are about to return home.

Firsts and Other Notables
This is the first appearance of the boathouse on the grounds of the X-Mansion. It will eventually serve, for a time, as the home of Scott and Jean as well as Gambit.

As the issue ends, the New Mutants are sitting down to watch Magnum, P.I.; this becomes their favorite show, and they will reference it several times in the course of the series.

We get our first glimpse of the Demon Bear which killed Dani's parents, though technically this is not the bear's first appearance, as it's technically a manifestation of Dani's power. 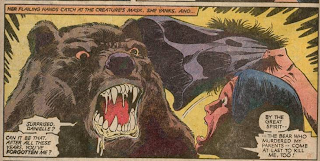 A Work in Progress
Banshee's back! With Moira on Muir Isle, Sean pops up once again, and even proposes to Moira, suggesting they try to start a family. She turns him down off panel, but Banshee makes it clear she's still haunted by Proteus and her first husband. 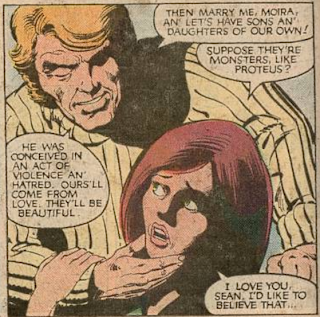 Illyana is staying with Moira as well, and Banshee mentions it's because Professor X is introducing the New Mutants to the school, but it doesn't really explain why Illyana isn't just part of the team in the first place. 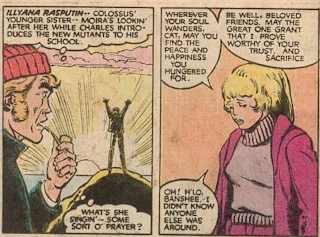 This issue takes place on Kitty's birthday, as Illyana is singing a song, taught to her by the Storm who lived in Limbo, in memory of Kitty; those events will eventually be explored in the Magik limited series. 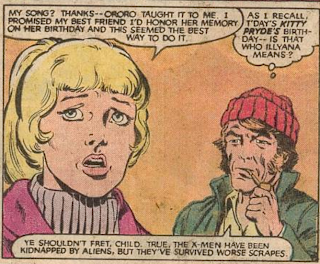 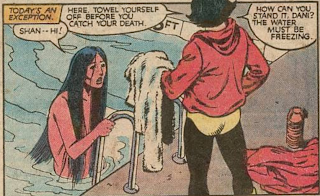 It's established that Sam has trouble turning when he's flying, which becomes his chief weakness, one he's constantly trying to overcome, throughout the series.

Via the Brood Queen, it's revealed that Dani has the potential to use her to power to make the images she creates real.

I Love the 80s
In case this is your first issue, Dani helpfully thinks everything you need to know about her on the first page. 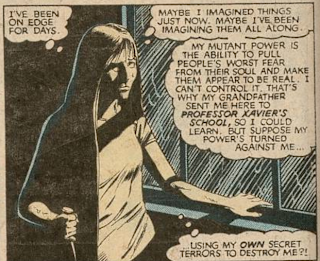 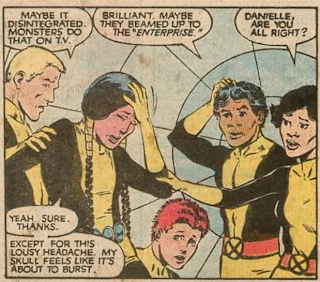 The New Mutants settle in to watch Magnum, P.I. It doesn't get more 80s than that.

Teebore's Take
With this issue, Claremont and McLeod wrap up the title's initial story arc, and set the stage for the first meeting between the New Mutants and the X-Men in X-Men #167. Despite taking place light years away, Claremont manages to tie the New Mutants in with the ongoing Brood story, while at the same time, use that story to continue to build the characters and relationships of his new team. Likely because I came to New Mutants after it had become X-Force, I've always considered New Mutants to be primarily about Sam. Re-reading these early issues, however, makes it clear that, in these early goings at least, Claremont is most interested in Dani Moonstar. Her power allows Claremont the most opportunity for angst, and her hostility towards Professor X works well in a story in which Professor X is unknowingly possessed. Other characters will, of course, get time in the spotlight, but at this point, it's very clear that Dani Moonstar is already a Claremont favorite.

Next Issue
Next week, the New Mutants come face to face with the returning X-Men and Professor X stands revealed in Uncanny X-Men #167.

After that, Dracula returns in X-Men Annual #6.
Newer Post Older Post Home
Posted by Austin Gorton at 8:00 AM