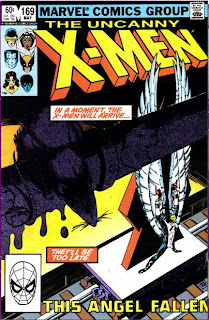 In a Nutshell
The X-Men meet the Morlocks.

Plot
Candy Southern comes home to the Manhattan penthouse she shares with Angel to find him missing and intruders in the house. She calls Professor X for help, but is cutoff by one of the intruders. Professor X telepathically alerts Nightcrawler, nearby with Amanda Sefton, to the situation, and Nightcrawler teleports to Angels' penthouse in time to see Angel being carried into the subway moments before Candy is thrown through the window. Meanwhile, Sebastian Shaw arrives at the Hellfire Club and discovers that the White Queen has been rendered comatose by a malevolent telepathic attack. Later, the X-Men convene at Amanda's apartment to debrief Candy before setting off to follow Angel's kidnappers into the subway. Underground, they're attacked by a small group of Morlocks, mutants living underground, and Kitty is ordered to break off and scout the area. 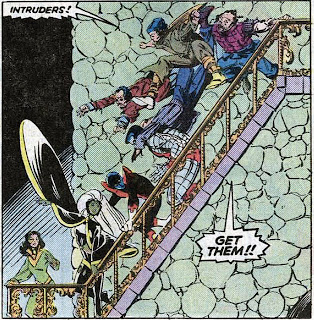 Kitty observes four Morlocks watching the fight, but is detected. One of the watching Morlocks, Plague, passes her hand through Kitty's phased arm before she flees. The rest of the X-Men make short work of the Morlocks, then proceed deeper underground, while a separated Kitty suddenly collapses and is found by Caliban. The X-Men eventually reach a vast tunnel where the Morlock leader, Callisto, is holding Angel, determined to forcibly marry him. The X-Men are quickly overcome by the Morlocks' vast numbers and captured. Elsewhere, Kitty awakens briefly in a strange room before passing out again. Caliban returns, and worried that Kitty will soon die of the sickness she received from the Plague, decides that he'll force Callisto to save Kitty, thereby convincing Kitty to stay with him forever.

Firsts and Other Notables
This issue is the first appearance of the Morlocks, a group of mutants living in old Cold War tunnels beneath Manhattan because their physical mutations prevent them from blending in as normal humans, their name taken from HG Wells' novel Time Machine (later stories have revealed that the Dark Beast, an alternate reality counterpart of Beast, was responsible for the initial creation of the Morlocks by genetically experimenting on mutants, but the less said of that retcon the better). Though their presence in the book will peak with the "Mutant Massacre" storyline forty odd issues down the road, they will remain a significant part of the X-Men narrative throughout Claremont's tenure and onward, and have appeared in several animated adaptations as well as (sort of) the atrocious third X-Men film.

In addition to the Morlocks as a whole, several specific significant members make their first appearance: Callisto, their leader (enhanced senses), Sunder (super strength), Masque (the ability to physically manipulate human flesh) and Plague (can infect others with disease). All will, to varying degrees, have an ongoing presence in the X-Universe.

The Alley, the main Morlock tunnel, also appears for the first time. 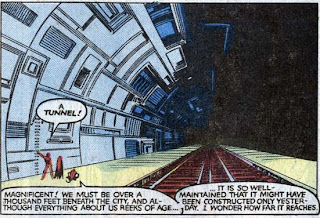 Caliban returns, following his debut in issue #148, and is revealed to be a member of the Morlocks as well. He's still crushing on Kitty. 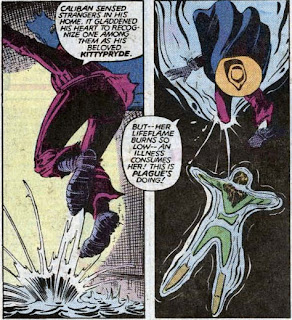 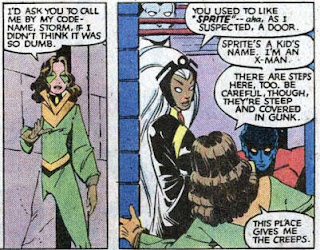 Sebastian Shaw, Tessa and the White Queen make brief appearances in this issue, the later having been put into a coma by some kind of malevolent force - this ties in with the overarching plot that runs through the rest of Smith's run, culminating in issue #175.

Sales continue to rise as, according to the Statement of Ownership, the average number of copies of each issue sold per month in the previous year was 313,955, with the single issue nearest to the filing date selling 327,223 copies (last year's numbers were roughly 260K per month, with around 290K copies of the most recent issue sold).

A Work in Progress
Both Angel and Candy Southern (spelled "Sothern" in the issue) make a guest appearance.

Wolverine is away from the team, tending to personal business in Japan, which we'll see in the first issue of his limited series, while Cyclops is considered to still be in Alaska.

Coming the closest yet to actually being on the team, Amanda offers to help the X-Men track down Angel, and is even seen wearing a costume of sorts, but is left behind to guard Candy. 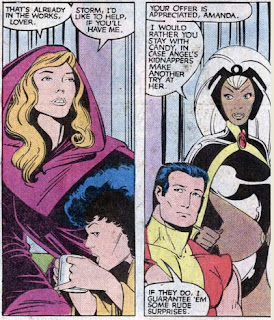 Lockheed is also left with Amanda, with Storm and Kitty wondering just how sentient the little dragon may be. 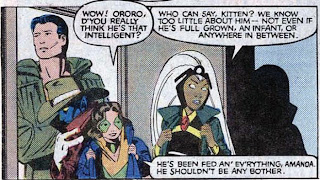 The X-Men use a pre-programmed mini Cerebro unit to track Angel in the tunnels.

Storm's subtle character changes have been noted by Nightcrawler.

I Love the 80s
Professor X is seen reading a book on the Marvel Universe.

Storm, Colossus just told you he was aware of your claustrophobia; why are you explaining its origins to him? 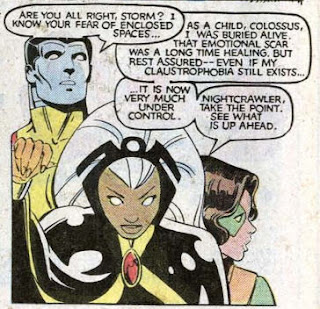 Best not to think of the fact that Kitty awakens in Caliban's room in a nightgown, meaning he must have dressed her in it. 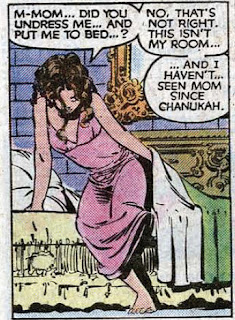 Young Love
Nightcrawler and Amanda are hot tubbing it, and talking of settling down with one another, when Professor X sends a naked Nightcrawler to rescue Candy, resulting in Nightcrawler being forced to unceremoniously dump Candy in the tub. 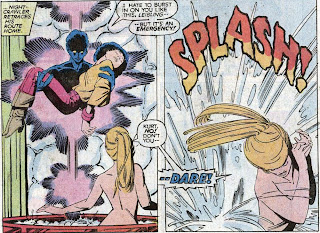 They're Students, Not Superheroes
Storm asks Professor X about using Wolfsbane's tracking abilities to help the X-Men locate Angel; Professor X insists that the New Mutants are not to participate in X-Men missions. 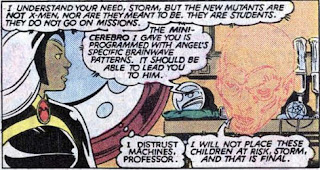 For Sale
The back cover features an ad for the Jedi Arena video game, which sounds and looks an awful lot like fancy Pong. 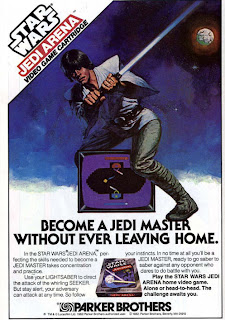 It's in the Mail
A letter writer expresses his dislike of the nickname "Sleazoids" for the Brood.

Teebore's Take
With this issue, Claremont introduces the Morlocks, arguably his most significant contribution to the title since "Days of Future Past" (at least in terms of opening the door for future plots; the Morlocks aren't nearly as thematically significant as either "Days" or Magneto's gradual reformation, though their initial appearance here does tie in with Storm's ongoing emotional/psychological issues). Their presence in the X-Men universe is somewhat problematic, as we'll get into next issue (when it becomes more apparent), but they serve this issue well, contributing to a tense, tightly plotted issue (assuming we quickly brush past Callisto's motivation for kidnapping Angel and bringing the X-Men in contact with the Morlocks in the first place).

Beginning in Angel's Manhattan high rise, the X-Men journey ever downward, into the subways and beneath; already shorthanded, they're gradually stripped of personnel the deeper they go until only Storm, Nightcrawler and Colossus are left to face the hordes of Morlocks (which, the story goes, were drawn in by Smith; Claremont only intended for the Morlocks to number a half dozen or so, but never specified that to Smith, who proceeded to draw a large group of them in this issue and next, which led, in part, to the "Mutant Massacre" story down the road). Smith's work is equally strong; he does a masterful job of subtly contrasting the "beautiful" X-Men with the more fugly Morlocks and conveying the increasingly cramped quarters of the Morlock tunnels before opening things up in the Alley. I tend to overlook this issue when raving about Smith's artwork, but it deserves consideration as one of his best.

Next Issue
Tomorrow, we return to the New Mutants with their fourth issue. And next week, Uncanny X-Men #170 wraps up the introduction of the Morlocks.
Newer Post Older Post Home
Posted by Austin Gorton at 8:00 AM