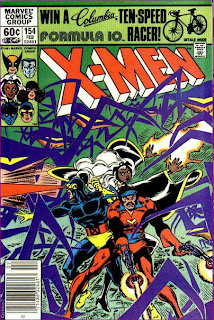 In a Nutshell
Corsair returns to Earth chased by a group of alien bounty hunters.

Plot
Cyclops and Storm are playing handball in the mansion's gymnasium, eventually calling the game a draw as they are too evenly matched. Meanwhile, Corsair races toward Earth, pursued by a Shi'ar Dreadnaught. In the Bermuda Triangle, the rest of the X-Men are moving equipment into Magneto's old island base, Professor X having decided to relocate their headquarters in light of the damage to the mansion and growing anti-mutant sentiment in the country. In space, Corsair nears Earth, but his ship is damaged by the Shi'ar. At the mansion, Storm and Cyclops are having dinner together and discussing their respective desires for leading the X-Men when they're interrupted by Corsair's ship crashing into the lake. They pull him free, and when he awakens back at the mansion, Cyclops demands to know why Corsair has a locket containing a picture of Cyclops and his brother as children. Corsair tells him the children are his sons. Cyclops doesn't believe him, but Storm tells him it's the truth. Just then, a Sidrian Hunter bursts into the room, pursuing Corsair.

Corsair blasts it, but soon the mansion is overrun by the aliens. As Storm holds them off, Cyclops and Corsair race for the Blackbird, getting airborne just as the Sidri destroy the mansion. Storm joins them on the jet, but the remaining Sidri join together and form a massive ship, chasing after the Blackbird. The battle rages into New York City until Storm and Cyclops are able to disrupt the Sidri ship while over a petroleum storage facility. As the individual Sidri tumble down, Corsair blasts one of the storage tanks, triggering a massive explosion that destroys the aliens. As Cyclops, Storm and Corsair fly away, Corsair explains why he's come to Earth: Lilandra was recently kidnapped by terrorists, with the Starjammers implicated and a trail leading back to Earth. The Shi'ar have dispatched an armada to rescue or avenge Lilandra, and are willing to destroy the planet if need be.

Firsts and Other Notables
Corsair, last seen in issue #109, returns, and Cyclops learns that Corsair is his father. 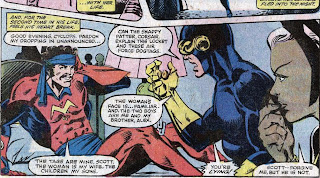 The Sidrian Hunters, a minor alien race of spider-like bounty hunters, make their first appearance. They'll pop up once or twice more.

Following Professor X's concerns last issue that the X-Men are running low on resources for repairing the mansions, this issue finds them moving into Magneto's island base in the Bermuda Triangle from issue #150. 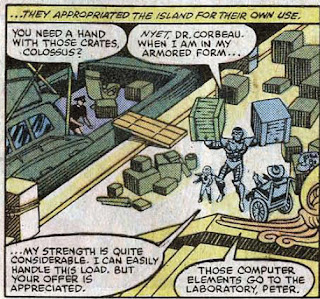 Which is good, since the mansion, after suffering significant damage in issues #143 and #151, is more or less destroyed by the Sidrian Hunters in this issue, making this issue the first time (of several more to come) the vast majority of the mansion is destroyed. 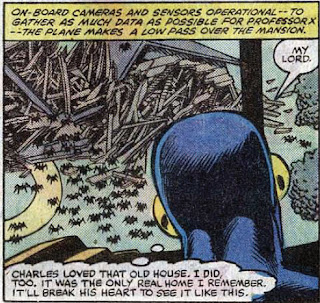 A Work in Progress
Carol Danvers is struggling with her memory loss post Avengers Annual #10. We also learn there is a history between her, Michael Rossi (whom we met in issue #96 alongside Stephen Lang), and Wolverine.

The X-Men receive a letter from the White Queen's Massachusetts Academy revoking Kitty's admission, ensuring she'll remain at Xaver's for the time being, tying up that loose thread from issue #152. 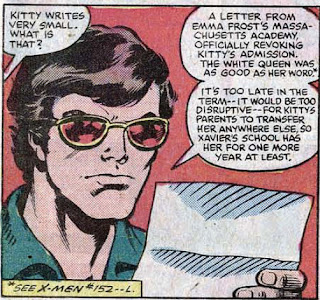 Storm and Cyclops reveal a friendly rivalry, and discuss their respective feelings about leading the X-Men. 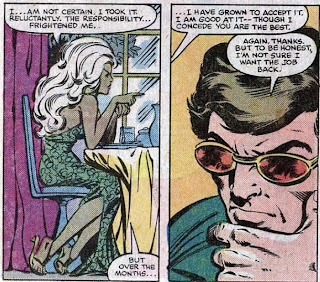 The X-Men's Blackbird jet now has "Kitty's Dragon" painted on the side.

When Cyclops learns the Sidrian Hunters are alive (and not machines), he refuses to kill them, forcing Corsair to act. 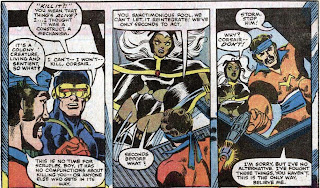 I Love the 80s
On his way to Earth, Corsair passes Voyager 2, bound for Uranus and scheduled to arrive in 1986. 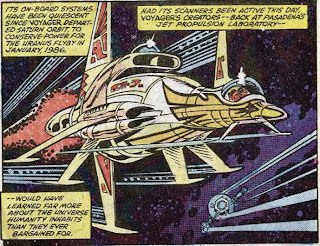 Carol is rocking some great short-shorts while in the Bermuda Triangle.

Claremontisms
Claremont gets his airplane geek on. 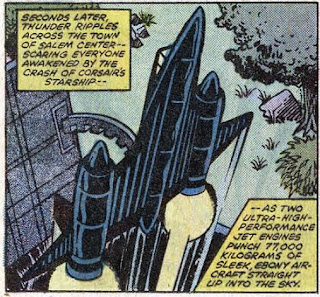 The Awesome and Terrible Power of Cyclops
Cyclops tries out a new experimental windshield on the Blackbird which amplifies his optic blast. It's basically an excuse to give the Blackbird some offensive capabilities. 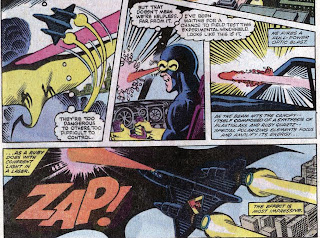 Human/Mutant Relations
Professor X (while wearing his Indiana Jones hat) cites growing anti-mutant sentiment as a motivating factor in moving to Magneto's island base, and he fears this most recent wave may have official government sanction. 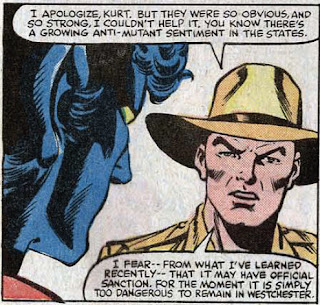 Bullpen Bulletins
In this month's column, Jim Shooter goes through this whole "no more Mr. Nice Guy" routine and pretends to adopt the persona of a super-villain. In explaining his reasoning for doing, he mentions getting flak from fans for removing artists from books even though the artists "remove themselves" by failing to make deadlines. He then wonders why atists take on so many books if they can't do all the work on time. I'm not sure if he's being intentionally dense, because the answer is pretty obvious: they get paid by the page, so the more books they draw, they more money they make.

It's in the Mail
Kitty's popularity continues to rise. This issue features a letter writer declaring his desire to be Kitty's boyfriend. 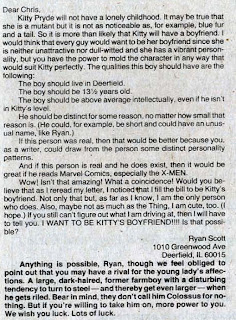 Teebore's Take
After some shuffling about, a pseudo-greatest hits tour and a little fun, Claremont and Cockrum embark on the first (and arguably only) multi-part story of their second collaboration, the Brood saga. It marks the point at which Claremont finally seems to have shaken his post-Byrne malaise and begins to chart his own path for the characters (albeit while still playing to the strengths of his collaborators), independent of whatever plans he and Byrne may have had prior to the end of their collaboration. And Cockrum, whether well-rested following his two issue break or reinvigorated by the return of science fiction (and his Starjammers) to the book is in top form once more.

This issue is something of a slow build, only hinting at the larger plot to come (someone's kidnapped Lilandra) at the very end, and instead spends the majority of its time (even after the action breaks out) examining the relationship between Storm and Cyclops. Though not one of the hallmark relationships of the X-Men franchise (like, say, the Scott and Jean romance or the Wolverine/Kitty mentor/mentee relationship), Claremont will occasionally return to the (sometimes not so) friendly rivalry between the X-Men's two leaders, and that rivalry begins in earnest here. Most of the best stories during the Claremont/Byrne run found the right balance between strong character work and innovative action; that the centerpiece story of Claremont and Cockrum's second run together kicks off with a character-driven issue featuring some fun action sequences bodes well.

Next Issue
Tigra guest stars. Try to contain your excitement (don't worry, it's got Deathbird and the Brood, too).
Newer Post Older Post Home
Posted by Austin Gorton at 10:00 AM