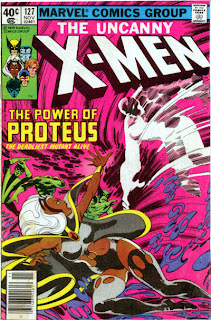 In a Nutshell
The X-Men track Proteus to Edinburgh, where he possess the body of his father and captures Moira

Plot
With Proteus advancing through the gale force winds she's created, Storm tries to fly away from the villain, but he warps reality around her, causing her to crash into the ground. Just as he moves in for the kill, Proteus is shot several times. On a nearby hillside, Moira fires a sniper rifle, locking in on his energy signature. Lining up for a kill shot, Cyclops intervenes, causing her to miss. Moira knocks out Cyclops, but when she sets up for another shot, Proteus, fearing the metal bullets, has fled. Moira, recognizing that Proteus has been moving steadily south, thinks she knows where he is heading, and breaks off on her own. She arrives in Edinburgh where she meets her estranged husband Joe, telling him he has a son and that his son is likely coming to kill him.

The X-Men reconvene, with the ones that faced Proteus shaken, especially Wolverine. Worried about their condition, and that he himself was taken out so easily by Moira, Cyclops picks a fight with Wolverine to snap him out of his funk. An enraged Wolverine attacks Cyclops, who manages to keep Wolverine angry and off balance. Cyclops then brings Nightcrawler and Storm into the fight as well, testing them and holding his own until Storm is about to cut loose, fearing Cyclops has been possessed by Proteus. Cyclops gives up, explaining he needed to test the X-Men who faced Proteus to make sure there was no lasting damage, a move which earns him the respect of Wolverine. Just then, Phoenix telepathically senses terrible fear coming from Moira, who is being attacked by Proteus, now possessing his father's body and flush with his father's memories and emotions. The X-Men arrive and attack him, but Proteus easily fends them off before grabbing Moira and threatening to snap her neck or possess her if the X-Men don't leave him alone. Moira begs the X-Men to sacrifice her, saying her life is nothing compared to the lives Proteus will take if left free. The X-Men are stunned into inaction, but Cyclops agrees with Moria: Proteus must be stopped, no matter the cost.

Firsts and Other Notables
It is revealed that Moira is married to Joseph MacTaggert, Proteus' father, an up-and-coming politician who refuses to divorce her for political reasons. This is his first appearance. 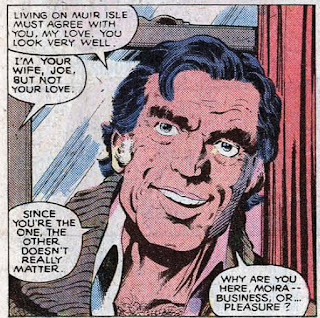 A Work in Progress
Cyclops makes it clear that the X-Men intend to capture Proteus, not kill him. 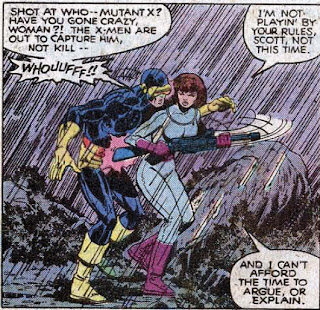 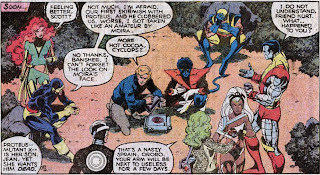 Phoenix admits to Cyclops that she can't track Proteus telepathically. Later, he marvels at her power level. 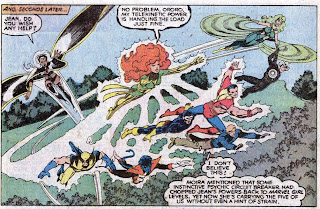 Phoenix also finds that it once again feels good to cut loose with her power. 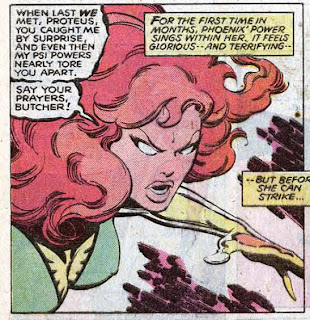 Following their "training" fight, Cyclops finally earns the respect of Wolverine, as Wolverine tells him, 'I ain’t thought much o’ you in the past, Cyke – as team leader, or as a man. I was wrong", effectively putting to an end the simmering conflict between the two. 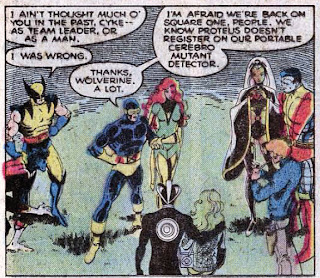 Proteus notes that his power requires visual contact with his target to work (which explains why he can't just remake the entire world in his image). He also says that when he possess someone's body, he gains all of their memories and abilities. Which means, after he possessed one of Multiple Man's duplicates last issue, he could have just used his power to create new host bodies for himself.

That 70s Comic
Joe MacTaggert calls the police and asks for Chief Superintendent Dai Thomas, a supporting character from Marvel UK's Captain Britain comic. However, Thomas is a London policeman, and would have little authority to do anything for MacTaggert in Scotland.

Moira reveals to Joe that Proteus is their son by saying, "when we said our ‘fond farewells’ in New York all those years ago, you didn’t just put me in hospital for a week, you left me pregnant", strongly implying that Proteus is a child of rape, or at the very least, a child conceived prior to or in the wake of a violent act. Though it likely went over the heads of younger readers (it did me, the first several times around), it's a pretty ballsy implication for a superhero comic in the late 70s. 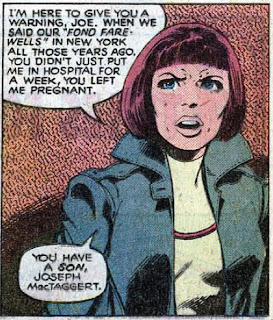 Artistic Achievements
In all the times I've read this issue, I never before noticed that you can see Polaris changing into her costume in the background of this panel. 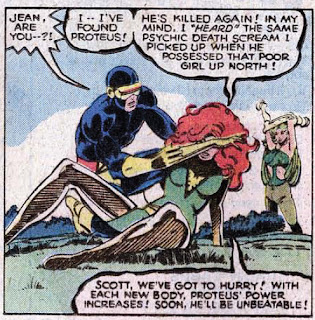 The Awesome and Terrible Power of Cyclops
Worried about the fighting capabilities of the X-Men who encountered Proteus (and himself), Cyclops picks a fight with Wolverine and eventually brings Nightcrawler and Storm into it to test them, effectively taking on half the team by himself and holding his own in a great showcase for his skill and abilities as a leader. 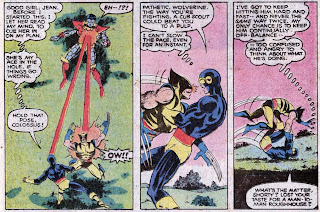 For Sale
Remember when the new Saturday Morning Cartoons were a big deal? Here's what the lineup in fall of '79 looked like for the "Peacock Club". 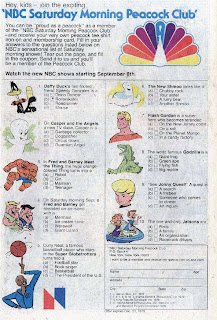 When I was a kid, I thought having my own baseball card would be the coolest thing ever. Then I got one. And it was lame. 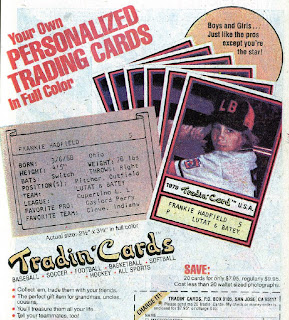 John Byrne on Claremont's ability to make the reader care about minor characters
"He did it with Jenny Banks, the little Scot girl who gets zapped on the road. She was in there for maybe three before she got killed, but you knew who she was; you knew where she came from; you had a hint of her personality; she was a real person...This was not just a cipher who was zapped to show how bad the villain was. The same is true of the sailor who gets zapped by Proteus [in issue #126]. We know he has a wife who doesn't like him drinking, and all kinds of stuff like that. A tremendous sense of who these people are in just the space of a couple of panels, and I think that's a tremendous strength on Chris's part." 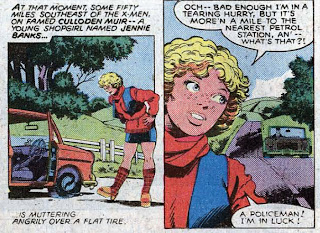 Teebore's Take
The "Proteus" story hums along nicely, amping up the tension by having the X-Men fail spectacularly against the villain and making it personal by putting Moira in the line of fire by issue's end. But the highlight of this issue (and one of the reasons it's a favorite of mine) is the sequence when Cyclops takes on half the team and wins, earning the respect of Wolverine and showing the readers that he's more than just a whiny nerd. It's one of my favorite Cyclops moments, and one of the moments that immediately comes to mind whenever anyone asks why I like Cyclops. It does a lot to show how effective a team leader Cyclops is, as he recognizes a problem and immediately works to resolve it. Both his strategic (knowing he needs to be keep Wolverine angry and off balance) and tactical (predicting to where Nightcrawler will teleport, shooting the ground out from under Storm) abilities are showcased and, tellingly, Cyclops take on all the risk himself, leaving a telepathic heads up to Phoenix as his only failsafe, unwilling to risk anyone else to get the team back into shape. It's a classic Cyclops moment, and a testament to the strength of the Claremont/Byrne run that they manage to squeeze one of the most iconic Cyclops scenes and resolve the long simmering conflict between him and Wolverine into the margins of a story whose primary focus has nothing to do with either.

Next Issue
The final fate of Proteus!
Newer Post Older Post Home
Posted by Austin Gorton at 8:00 AM